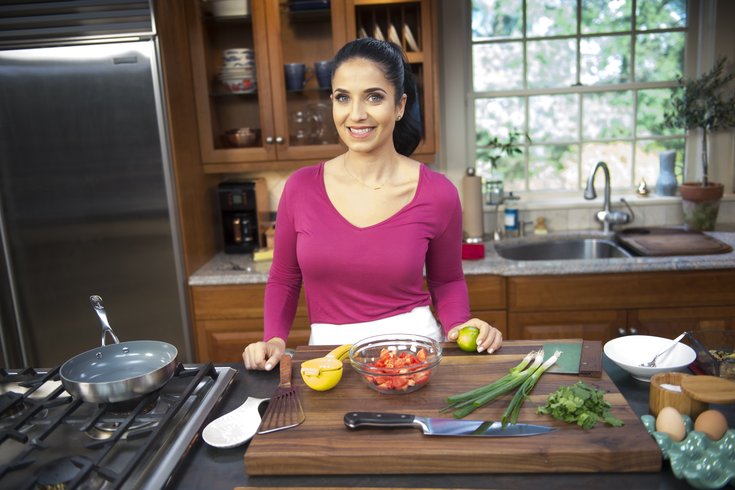 With Cooking Channel's Laura Vitale, what you see really is what you get.

Vitale, a native of Italy but has been a resident of Atlantic County since age 12, is a self-taught 29-year-old culinary personality who earned her stripes as the star of her self-created Web series "Laura in the Kitchen." Vitale, regarded for her mix of all-American charm and Italian culinary sensibilities, launched the show in 2010 after her father's restaurant, La Riviera in Camden, where she was a chef, shuttered and left her jobless. Rather than find restaurant work elsewhere, she followed her husband's advice and launched a cooking show on her own, meant to emphasize the kitchen as the heart of the home and showcase her approachable personality.

She's since accumulated 2.2 million subscribers through her YouTube channel, put out a cookbook and recorded two eight-episode seasons of "Simply Laura" with Cooking Channel, a show that focuses predominantly on Italian dishes that are easy to make.

Here, Vitale explains what to expect in the upcoming season of "Simply Laura," what dish even she struggles with and how she uses "Cucina Povera" to make an Italian delicacy.

What lasting influence did your dad’s restaurant in South Jersey have on your cooking career?

Talking to people, cooking with people, seeing their reaction, to me it reaffirmed the feeling that people care more about being free and relaxed in the kitchen because I saw it with my own eyes -- rather than making something that’s so perfect and labor-intensive just to impress someone. This is what people want: to be in a conversation, to turn to cooking to relax and enjoy themselves. And I saw that with my own eyes. I had hundreds of customers in a day who would all watch me cook [in our open kitchen], and ask questions, and we’d laugh and giggle and I love that it became a conversation between them and myself. I’ve always thought of that in my career. It’s just a conversation. People want to feel included and like they're part of something. It’s something that I’ve always thought of and it stuck with me for years.

Who would you say is your audience?

My audience I’d say is mostly females, but it changes from time to time. It used to be that a big chunk of my audience was 17-to-21-year-olds. Now they have grown up and 27 to 40 is my biggest demo -- then teens and preteens, and I have an older audience that's 40 to 55, and it's really equal between men and women. Everyone’s watching. Everyone loves food! Kids love to bake, moms need to know quick and easy dishes and grandparents love discovering old recipes they might have lost. Everyone loves food; everyone loves to cook.

How do you think having a mostly millennial audience for your cooking show is different, compared to shows made with older audiences in mind?

What I’ve noticed over the years, when I first moved to this country and would watch food shows on television, is that it was made up of a lot of professional chefs back then. Which is amazing. You turn on food TV and you’d see Emeril and all these amazing chefs. Now, things are different. Kids and teens and young adults, they’ve turned to food for guidance. They want to turn on to people who are no different than they are, which is why I think my series and season one of 'Simply Laura' did so well, because people could relate. People want to turn on to someone who really are no different than they are, which is a trend I noticed on my existing audience online, my digital series, for years now. People want to see someone they can relate to – an ‘If she can do it, I can do it’ kind of thing. That’s been the main difference. Even now, on food TV, there are some trained chefs but there are also people like Rachael Ray -- a pioneer woman -- and all these wonderful women who have really made a name for themselves without being professionally trained.

It’s really a celebration of the heart of the home, which is the kitchen. I bring a lot of my own friends family into season two. My dad’s going to be in it, my friends are gonna be in it and my cousin’s gonna be in it because I really want people to see what I’m like when I'm with, and what I cook for, my friends and family. I want people to see really – truly – how laid-back I am, and how much I enjoy the kitchen and the process of cooking. The viewers will get to see a few of my very favorite places to shop, how I feed and put my friends and family to work when they come over. They get to see what my life is like. I do spend a lot of time in the kitchen and I feel like it’s the heart of the home; it's a place I naturally gravitate toward. I want people to see how I celebrate that.

You make ‘Cucina Povera’ in the first episode of season two. What is that?

Cucina Povera, when I was growing up my grandmother would say ‘very inexpensive food – poor food,’ but now it’s some of the most celebrated food in culinary. Ribollita is one of them – Ribollita is a soup that used to addd a lot of stale bread to bulk it up, to feed a large crowd, and now it’s one of the most desired soups in Italian cuisine. I wanted to celebrate that. ‘This is something you can make for a special date night.’ And I like mine really sizzled and crispy and lovely, with salt and cheese, and now you see something really inexpensive to make. It’s wonderful. And we have it for date night because it’s something I love in general and you can see how something that's inexpensive that most people would turn their noses at turned into something so luxurious and so wonderful without breaking the bank and without breaking a sweat.

I have to say my, all-time favorite Italian dish has to be gnocchi. Simply because it was the very first thing I ever cooked, or helped cook, when I was little. I still remember, when I was little I was very tiny and couldn’t reach the counter, so my grandfather built me a wooden crate. I stood on the wooden crate and was next to my grandmother rolling the gnocchi on the gnocchi board – which she still has, which is amazing – and that was the very first thing I ever cooked. So naturally, it’s always stayed with me, and when I shared that recipe on the digital series I wanted to do it justice, so I went to Italy to film it with [my grandmother] in her kitchen using her gnocchi board. Because that’s why I love to be in the kitchen. It feeds that soul, that need to be connected.

What is the most challenging dish for you to make in the kitchen?

The most challenging dish for me to this day has to be a classic Italian Sfogliatella. It’s an Italian dessert and it’s a very flaky pastry that’s filled with a gorgeous filling of ricotta and it’s amazing. I got the filling down pat, but the actual pastry part is so difficult. If you want to make it in a traditional way, you have to do it justice. It calls for a lot of lard, which I don’t typically use very often, and it’s something I just cannot get right -- I just can’t do it. When I’m in the mood for one I go to the Italian Market in Philly and find one there, or I find one when I go to Italy, which I go once or twice a year. I absolutely have not given up, but it’s challenging still.

Where do you like to eat in Philly or South Jersey?

I really like to eat at home, to be honest. But when I go to Philly there are a few places I enjoy eating, and one of my favorite places I enjoy eating is Positano Coast. The food is excellent -- it’s really, really delicious, authentic Italian food. The owner lived in the same town we’re from, where I grew up in Italy, so I’m very familiar with their flavors, and their food is home to me. They have the best limoncello martini around, which doesn’t hurt.

And if you like Mexican food, really good Mexican food in South Jersey, there’s a place called Fiesta Mexicana in Lindenwold that has, by far, my favorite Mexican food. You have to make a reservation a week before if you plan on going on the weekends because it’s so packed you won't be able to get in, but it’s very good, low-key, authentic Mexican. Their ceviche and guacamole are just to die for.

I saw a clip online of you and your husband going to Wawa for coffee. How do you take it?

I’m super boring when it comes to my coffee. I like a plain black, original coffee. I don’t really do flavored coffee often because it’s so flavored that it’s almost like a dessert, you know? So I do plain coffee with a splash of skim and just a little sweetener, but hardly ever. I’m very basic when it comes to my coffee – I don’t know why, but I always have been. Occasionally, if I’m at Starbucks, I’ll get a nonfat caramel macchiato, but that’s very rare.

What is your long game plan? Five years from now, what do you want to accomplish?

In five years we’d ideally be in season eight or season nine of 'Simply Laura,' would have another series – some sort of talk show series – a product launch and multiple books. Sky is the limit! I feel like there’s so much more I want to accomplish hat we haven’t even touched the surface yet. There are a lot of things happening in my mind that I hope happen in reality, and one is to have multiple series of 'Simply Laura' and a product -- whether it’s knives or a really good set of pots and pans or dishware -- I can create that I love, that I can share with people.