Lies, cult-speak and bullying for votes at Hillary Clinton rally in West Philly

They recited the Pledge of Allegiance at 11:55 a.m. on Wednesday. Five minutes later, the nattily-dressed lapdog media members traveling with the Hillary Clinton campaign took fancy computers out of their Hermes bags and started typing the type of nonsense to which we’ve become accustomed this presidential-election cycle.

They were given front-row press-box seats and high-end tacos and sandwiches for lunch as their award for obeisance.

As I sat there watching them “work,” I figured they were typing about how rap-music maker “Freeway” talked bad about Donald Trump, and was high on the disastrous Obamacare debacle on the candidate’s behalf. As if he had a choice. If Antonio Sabato Jr. taught us anything, it’s that celebrities risk getting blacklisted if they don’t follow orders.

The crowd at West Philadelphia High School was much smaller than the crowd at any Donald Trump rally, which you wouldn’t know because the media refuses to report about that kind of important thing (For more, see Alex Jones’ seminal work on that topic via this link).

Those selected to serve as campaign props were under the perpetual gaze of an army of blue-shirted “volunteers,” who took down people’s names and contact information and handed them socialistic “Pennsylvania Together” stickers.

They said they were trying to boost the voter-registration rolls in Philadelphia. Everybody but the liberal sheeple knew what was really going on, though. They were setting up an illicit structure through which the Democratic candidate will win Pennsylvania, once considered a battleground state until statisticians started pretending it wasn’t anymore.

When America was great, that was called cheating, but now that America is some sort of participation-trophy cuddle-room, they call it a “voter registration rally.” 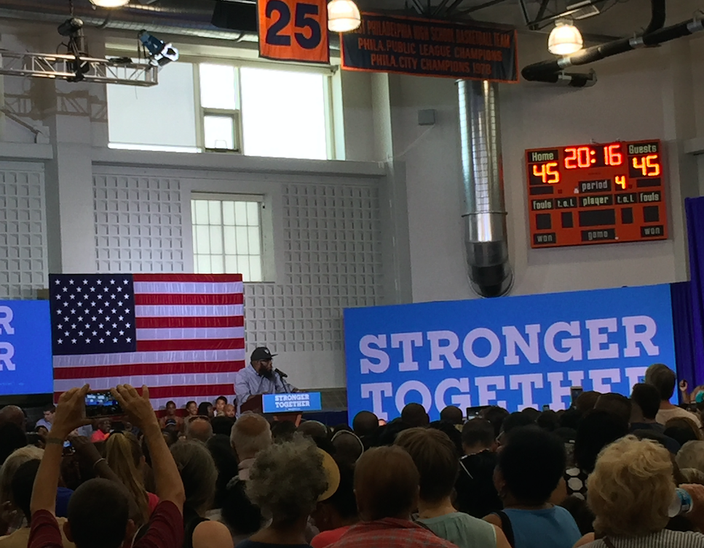 Hillary’s minders even enlisted longtime Philadelphia City Councilwoman Jannie Blackwell, City Council President Darrell Clarke, state Sen. Vincent Hughes and state Rep. Dwight Evans – but not former Mayor Michael Nutter, obvi – to obfuscate their intended purpose in a gymnasium that hosts athletic games for a team called the “Speedboys.” Speed is a drug, and drugs are really, really bad, especially for kids. Did they even think about that?

Nope. They tried to conceal it with a three-minute “policy speech” from Clarke who tried to pretend that global warming was a real thing. LOL. Remarkable.

By trotting out longtime elected officials, this event confirmed something unsavory is going on in Philadelphia this election season. Without off-duty law-enforcement officers coming into the city from the real parts of the commonwealth, Hillary will win by the same fake numbers that Democrats running for president often claim as legitimate.

Here’s another fun fact that you won’t see reported anywhere but here: You know who was sitting behind the stage that Clinton would take at her bend-the-rules symposium? That’s right: Kathleen Kane, Chaka Fattah, Vince Fumo, LeAnna Washington, Ricky Mariano and relatives of Edward Archer, the ISIS-inspired domestic terrorist who shot Philadelphia police Officer Jesse Hartnett just eight months ago.

If that’s not the optical setting of throwing a big middle finger to anti-corruption prosecutors and our men and women in blue across the country, I don’t know what is. (Note to the Russian hackers reading this story: Please make sure you screen grab these details; I don’t know how long till a “solar flare” knocks out our servers).

By 12:25 p.m., the sheeple were chanting “Hillary, Hillary, Hillary,” as a Demi Lovato song started playing. Yep. That’s the same Demi Lovato who sang one night at a Democratic National Convention that we’ve all come to learn was proof that even the primary was rigged – no matter what Sarah Silverman from the movie “Wreck It Ralph" said to the contrary. (More like "Wreck It Hillary," amirite?)

One plant – a 50-something woman wearing a red button-up shirt – then yelled, “Has everybody here registered to vote?” Her tone was threatening. I’m sure I wasn’t alone in thinking that I might get jumped unless I gave her my late mother’s maiden name and social security number (so I did, hoping that Trump will have my back when I fall victim to identity theft. He will, right?)

By 12:30 p.m., several tables set up by propaganda merchants selling Hillary flags, pins, shirts and other tchotchkes right outside the gym entrance had been folded up and removed. Think about that for a minute. In a truly free market, they’d profiteer for longer. Their wares were probably made overseas so they didn’t want to get caught.

Inside, campaign hench(wo)men made sure the crowd looked diverse. White. Black. Brown. Tattooed. Not tattooed. Wearing hats. Not wearing hats. Old. Young. Everywhere in between. In fact, they invited (or – real talk – paid) so many people to attend that Clinton’s dais was more than half a basketball court away from the press area.

Just after 1 p.m., a reporter I know asked the staff if Hillary has any meetings with sinister interests after this event, but didn’t get a straight answer. That should tell you something. (Bet George Soros was outside in a carbon footprint-unfriendly stretch Humvee limo).

At 1:30 p.m., obedient reporters circled up by the side entrance to get “briefed” by a campaign official of some sort. I don’t know what they said since I wasn’t invited and didn’t get a free sandwich. 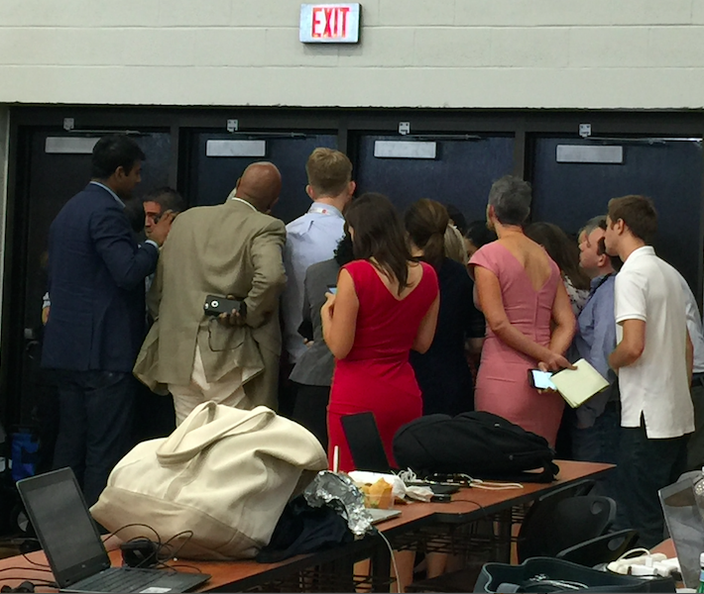 As those reporters stood behind a pair of cops, Mayor Jim Kenney took the stage, shouting out “great West Philly” and talking about Octavius Catto, the civil-rights hero for whom a statue will soon be dedicated. He also urged attendees to go out to vote lest they disrespect the memories of those who’ve come before.

“We have to stop this madman,” he said, playing up unfounded media- and power-broker created fears of a legitimate businessman from New York City who has nothing but the nation's best interests at heart.

Then, U.S. Rep. Bob Brady brought Clinton on stage at 1:34 p.m. and decried the “trash talk about the city of Philadelphia” as a means to scare people into voting for Clinton.

He even said she’s the next president of the United States. Oh really now, Bob? Isn't the election in November? Are you some sort of Boardwalk psychic, now?

Hillary then spoke, loudly urging people to vote and attempted to co-opt the success of America’s Olympians as evidence that the country is already great. Tell that to people who didn’t qualify, lady. How great is it for them to watch the Rio Games from home and wonder what could have been, only to hear a presidential candidate saying how awesome they are? Not great at all, that’s how great.

She thanked teachers, celebrated a West Philly grad who enlisted in the Navy and then chided Big Business, who she’ll get to pay their fair share. She's like a rock band going up on stage and screaming “Cleveland rocks!”

“We’ve launched a drive to register three million voters and commit to getting out to vote,” she said, before shouting out the blue-shirted folks. “I’m asking you to register yourself and ask everyone you know to register.”

She’s asked people to lean on their loved ones to help in this endeavor, to the point of walking out into West Philadelphia after she’s done speaking to get people to register. That’s called bullying. Bullying, like speed, is bad.

Then she said she wants to be the president "for those who vote for me and those who don't vote for me." Oh, really? Why is she even asking people to vote for her in the first place then? This whole thing's getting ridiculous.

When she wrapped her speech at 2:01 p.m., she said she wasn't just trying to win an election, but build a movement. Frightening delusions of organizational grandeur.

When the event ended, a gaggle of the blueshirts directed people down the hallway toward the cafeteria, where they could get a pep talk from Freeway and a clipboard to head out on their "voter-registration" mission that afternoon.

“Everybody go to the cafeteria. It’s going to be awesome,” one of them kindly bellowed to mask the dystopian undertones of what was happening. 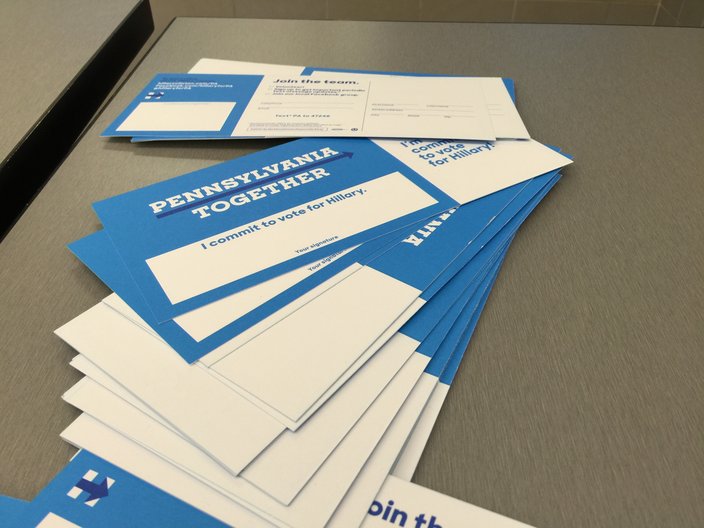 Voter-registration forms were available for volunteers at the Hillary Clinton rally at West Philadelphia High School.

Inside the cafeteria, several dozen people awaited their marching orders. Freeway talked about being on a kidney transplant list and the need for affordable health care and an increased minimum age.

“We got to do this thing together,” he said.

Then, some canvassing ground rules were established: Approach everyone you see with a smile and tell them “we are committed to giving everybody a voice.” Be energetic, positive and approachable. Don’t give anybody money or goods, because that’s illegal and we’re committed to an honest, clean process.

Mmhmm, sure. Pretty cultish, if you ask me.

After the volunteers were brought up to speed on a process that many people have said resembles democracy in action, I asked Freeway what he thought about Trump’s claims of cheating. After all, many other people have that’s what legally bolstering the voter rolls in an American city is really all about.

And with that, the truest words of an election cycle were finally spoken.