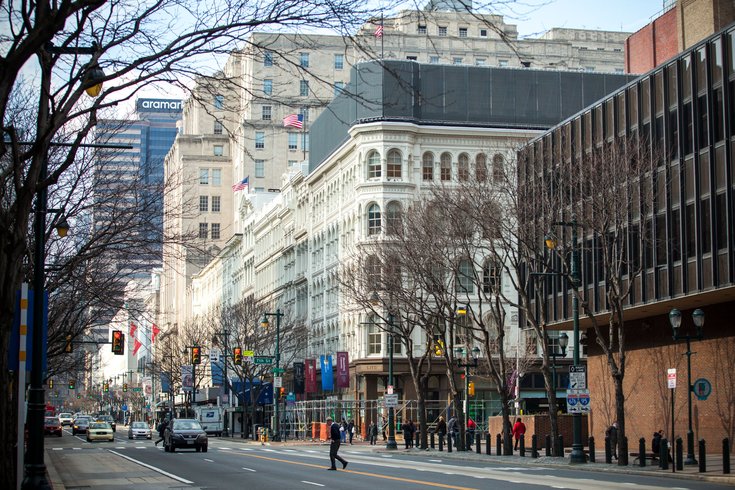 The Lit Brothers Building on 7th and Market Street in Philadelphia.

It's a new dawn for Lits.

The recently renamed building, previously the Mellon Independence Center Tower, debuted its $9.5 million wraparound billboard Tuesday, when it was first lit up. The digital ad spectacle sits atop the iconic building at 8th and Market streets.

A live television or breaking news stream could also fill the digital banner, the first of its kind in Philadelphia. As reported by the Inquirer:

"The Lits billboards are going up four years after Councilman James F. Kenney joined then-colleague Frank DiCicco in sponsoring October 2010 legislation allowing for the unprecedented large-format signs to make their debut in the city."

An additional $10 million will go toward "a lighting system to illuminate the seemingly endless rows of arched windows that are a signature feature of the historically certified structure, which dates to the 1800s."

Before it was the MIC Tower, and before it was rebranded at the Lit, the building was known as the Lit Brothers Department store, one of Philly's department stores of yore. The historical landmark's plan to move forward with the sign met some opposition along the way, mostly on aesthetic grounds, reported Curbed Philly in 2012. An architectural committee of the Historical Commission initially voted against the sign plan.

In true Times Square fashion, the display harkens back to the 19th-century era sign on the building that read: "A Great Store for a Great City." Now that the store is but a name, a tech-forward legacy emerges in its wake.