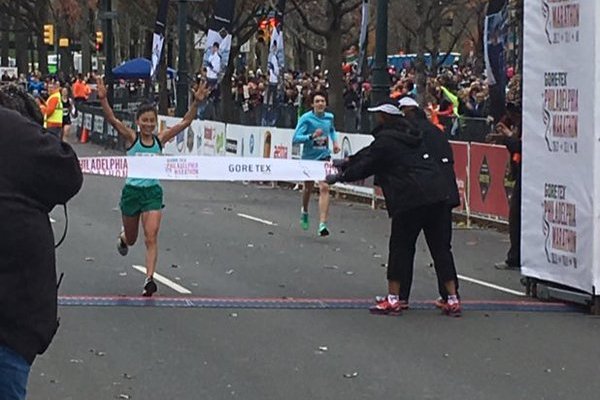 Thousands of runners made their way through the city during a cloudy and crisp Sunday morning for the Philadelphia Marathon, an event marked by heightened security.

Roads were closed and mass transit rerouted for the race, which started and ended on the Benjamin Franklin Parwkway as runners made their way down the Schuylkill River into Manayunk, into University City and around Old City.

Runners were set to start at 7 a.m. However, 6ABC reported that the start was delayed as security was very tight. The race began around 7:15 a.m.

The news station reports a minor accident and lots of foot traffic at security checkpoints caused the delay.

Mayor Michael Nutter said before the race that no credible threat had been made and no new measures would be taken.

However, he did say security would be stringent, noting that the deadly attacks in Paris earlier this month made him want to reassure the public they would be safe during the event.

Around 8:30 a.m., the winners of the half marathon crossed the finish line. According to Philly.com, Eliud Ngetich of Florida was the male winner, finishing with an unnoficial time of 1:03:37.05.

Aliphine Tuliamuk-Bolton of New Mexico was the female winner, finishing with an unnoficial time of 1:09:47.10.

And now we have our female Half Marathon winner- Aliphine Tulimuk-Bolton, who set a new course record with a time of 1:09:49! #RunPhilly

Many other runners and spectators posted their photos and videos of the race Sunday morning:

#PhillyMarathon, loving this lil station I passed. "They're running a marathon. Th least you can do is color" Haha😊 pic.twitter.com/xxAqp6MAv9

@Philly_Marathon security lines are long 30 minutes before the start. 18th and the Parkway. @6abc #JoinTheAction pic.twitter.com/9oclFSD20t

.@PhillyPolice are ready to lead the runners and hand cyclists of the @Philly_Marathon just as #Philly wakes up! pic.twitter.com/yqz4GUh6nJ

And the first runners of the 2016 Philadelphia Marathon are off! pic.twitter.com/vQVGO6UQXU

No runners yet, just us idiots on the cold corner of Front and Washington. #PhillyMarathon pic.twitter.com/toOu2Um5KE

The #PhillyMarathon is officially underway! pic.twitter.com/UPPmAGqatz

Greeting runners at the4 Mike mark on Queen Street.#PhillyMarathon pic.twitter.com/Ak90VcncuF

Waiting to pace my bro-in-law at the Philly marathon. Crazy, awesome 6-mo pregnant C is "running" the half. pic.twitter.com/4GdLEKJRmO

1st time cheering instead of running, but the reactions to my @HillaryClinton sign were pretty great #PhillyMarathon pic.twitter.com/n7eqgiH6cV

Elite runners beef at end of the Philadelphia Marathon. https://t.co/dgak42z2if

It's like the whole city is jingling! #libertybell #philadephia @philly_marathon pic.twitter.com/sosuX6RxbF

Finished at 4:04. Not my best, not my worst (but if it were a webpage, it'd be an "error") #PhillyMarathon pic.twitter.com/jnlIjg5kZD