'We really didn’t intend for it to become what it became today,' says co-founder Michael Nemeroff 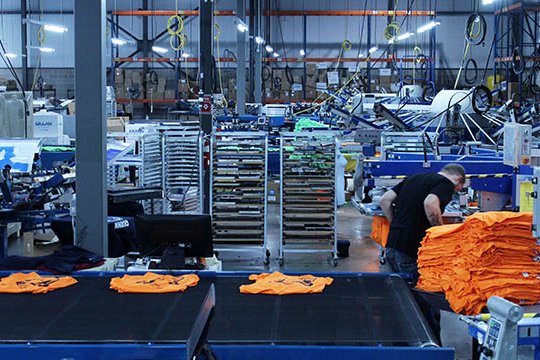 One Philadelphia-based company is making waves after being named one of the fastest-growing private businesses in the country.

RushOrderTees.com, a custom apparel company, has grown 157 percent in the past three years and reported $22.9 million revenue for 2015. They’ve even secured an apparel deal with the city’s beloved 76ers for the upcoming season.

It’s a dream that Michael Nemeroff, the co-founder and CEO of PrintFly, RushOrderTees.com’s parent company, couldn’t have imagined when he started 14 years ago alongside his brother and sister in his parent’s Huntington Valley garage.

Since then, Nemeroff, who’s never received a high school diploma, and his siblings, Jordan and Alexis, have grown PrintFly into a multi-million company now based in Philadelphia, with a passion for the city and no plans on moving anytime soon.

“We started in 2002 with one machine, one heater, and we had no skill or talent in the industry,” he said. “What I realized right away was that almost 70 percent of our customers came to us because another company hadn’t followed through on what they promised them.”

Since then, Nemeroff said he and his team have credited their success to giving customers exactly what they want, and delivering their services on-time.

“From there, it was really just learning how to manage, how to print, and new technology,” he said.

Nemeroff said that he considers PrintFly very much a tech company, as well.

In addition to the newly formed relationship with the Philadelphia 76ers, RushOrderTees.com has also hired 60 additional employees in 2016. About 80 percent of the company’s workforce consist of Millennials, too.

A good call – Adobo, a real estate company, showed that the City of Brotherly Love was the 17th most desired city among 2,000 young people surveyed between 1982 and 1998.

In the next five years, Nemeroff said he hopes to take on some of the heavy-hitters in the industry - like Teespring.

“We really didn’t intend for it to become what it became today,” Nemeroff said.