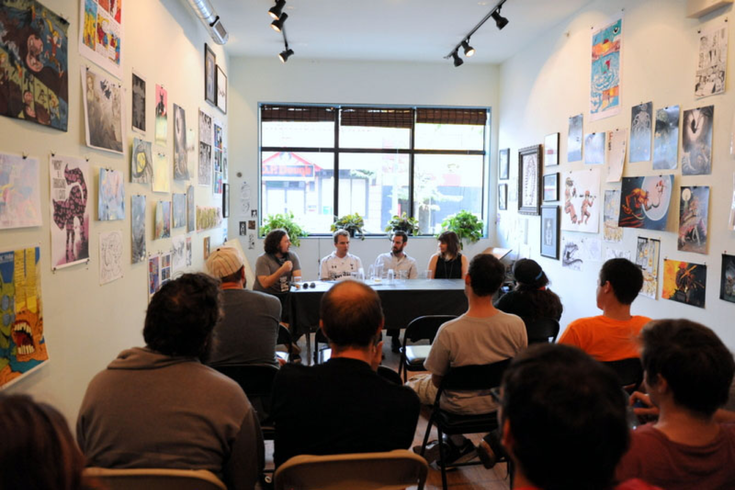 A panel at Locust Moon Comics.

Locust Moon Comics Festival has expanded its programming for its fourth year. Led by local comics store Locust Moon and taking place over three days, the festival will primarily be held on Halloween at The Rotunda on Walnut Street in West Philadelphia.

The programming will kick off Friday, October 30, with a Drink & Draw event at the Philadelphia Museum of Art. This event is open to the public and will feature special guests including Bill Sienkiewicz, Craig Thompson, Chris Claremont, Denis Kitchen, David Mack, Mark Beyer and Noah Van Sciver.

Saturday, the full donation-based festival with children's activities will take place from noon to 6 p.m. at The Rotunda. It will include comic-making workshops, face painting and a costume contest. Back at the Locust Moon shop (34 S. 40th St.), discussions with Chris Claremont and panels on underground comics, what it takes to "Draw on Life" and comics in fine art contexts will take place from 1-6 p.m. At 7 p.m., the fun continues with a Halloween party at Locust Moon.

The festival wraps up Sunday with an artists' brunch for exhibitors with plenty of pancakes at Locust Moon. Find more information on the festival lineup here.