A look around at the other NFC East training camps 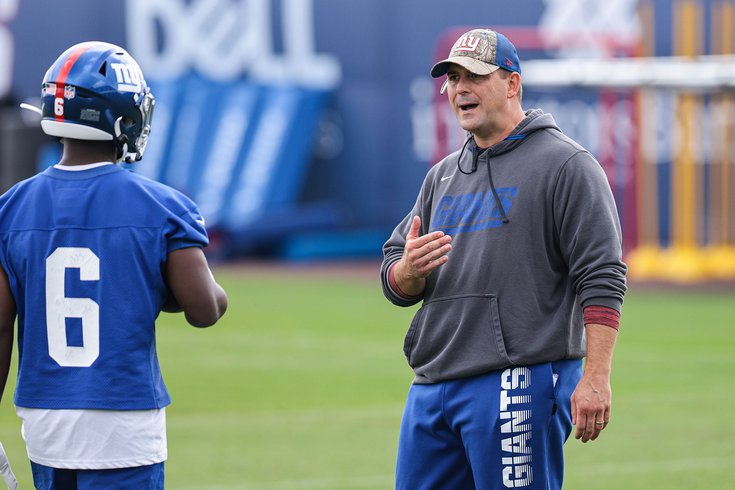 Joe Judge complains to a player about the Eagles tanking their Week 17 game last season.

The Philadelphia Eagles are eight practices deep in to their first training camp under Nick Sirianni, and their first preseason game is still five days away. With the team having a day off yesterday, now is perhaps an opportune time to take a peek around at what is going on in the Cowboys', Giants', and Football Team's camps.

The Giants have had a strange camp so far, to put it mildly. On Tuesday, they had a full-team fight, described here by Ed Valentine of SB Nation.

The New York Giants’ first padded practice of training camp ended Tuesday in a massive midfield donnybrook that brought virtually the entire team into the scrum, saw quarterback Daniel Jones throw himself into the middle of the fracas, and drew the wrath of an absolutely irate coach Joe Judge.

The melee began during the final 11-on-11 period of practice when Corey Clement, after a nice cutback run that launched him into the secondary, got blasted to the ground by Jabrill Peppers. Tight end Evan Engram jumped to Clement’s defense. Defensive back Logan Ryan went after Engram.

Chaos at midfield involving what seemed like every player in uniform ensued.

Judge did not enjoy the proceedings.

The coach broke up the fight with an expletive-filled tirade that lasted several minutes. Players ended up running multiple 100-yard sprints, doing pushups, then repeating the sprints and pushup. All the while they were harangued by an irate head coach.

In the first 10 days of Giants training camp, four players have retired already.

Giants are going to run out of gold watches. Another vet has retired. This time it’s OL Zach Fulton, who informed the team of his decision last night. Fulton joins Todd Davis, Joe Looney and Kelvin Benjamin as guys who have hung ‘em up so far this training camp.

Benjamin ripped Joe Judge in an interview with Zack Rosenblatt of NJ.com after leaving the team, while Jeff Allen, a former teammate of Fulton's, had this to say of Bill Belichick disciples.

And then there's offensive coordinator Jason Garrett, who ended a press conference like so:

Here’s the video of Jason from today: pic.twitter.com/K7QVyqxI87

The Giants finished with a 6-10 record in 2020, and then complained when the Eagles appeared to purposely lose to the Washington Football Team for better draft positioning, costing the Giants an opportunity to go 7-9.

The Cowboys got an early jump on training camp because they played in the Hall of Fame game in Canton. They barely played any starters in their first preseason game, and lost 16-3, in case you missed it.

The early star of their camp has been rookie LB Micah Parsons, who has impressed Cowboys beat writers, which is perhaps meaningful since linebacker is a positional group where Dallas has had good talent over the last decade or so. By that I mean, they know what a good linebacker looks like, while writers like myself have been wowed by guys like John Hightower because we haven't seen a good wide receiver in a long time. Parsons was often around the ball in limited action in the preseason game.

But the big story out of Dallas' camp is Dak Prescott, who hasn't practiced in more than a week with a right shoulder injury. If you'll recall, Prescott was highly ineffective against the Eagles when he played through a shoulder injury in a Week 16 game in 2019 that helped propel the Eagles to an NFC East title.

Many wondered how Prescott would recover from a gruesome leg injury that ended his 2020 season, but his shoulder injury has become the bigger concern. Jay Glazer of FOX reported on the timetable for Prescott's return:

Here is the latest on the Dak Prescott and Carson Wentz’s injuries, and how likely is it that Deshaun Watson stays with the Texans all season. #NFL #News @NFLonFOX #Wentz #Dak #Watson

While Prescott appears likely to be ready for Week 1, if he misses the majority of training camp and likely all four of the Cowboys' preseason games after also missing the last 11 games of the 2020 season, the timing of Dallas' offense could be off early in the season.

For most of the offseason, Washington and Indianapolis had the two lowest vaccination rates in the NFL. Ron Rivera, who is immune deficient after a recent bout with cancer, pleaded with his players to get vaccinated, and his message seems to have finally gotten through to some of the team's anti-vaxxers.

Washington has cleared the key 85 percent vaccination threshold, per source, as two more players received their first shot. This is another big step for the franchise. As of Tuesday the league average was 90 percent. But on Sat WFT was around 70 percent.

They remain one of the teams with the lowest vaccination rates in the NFL, but are trending upward.