A look at the Eagles' playoff-clinching scenarios, as well as their likely/ideal playoff opponents 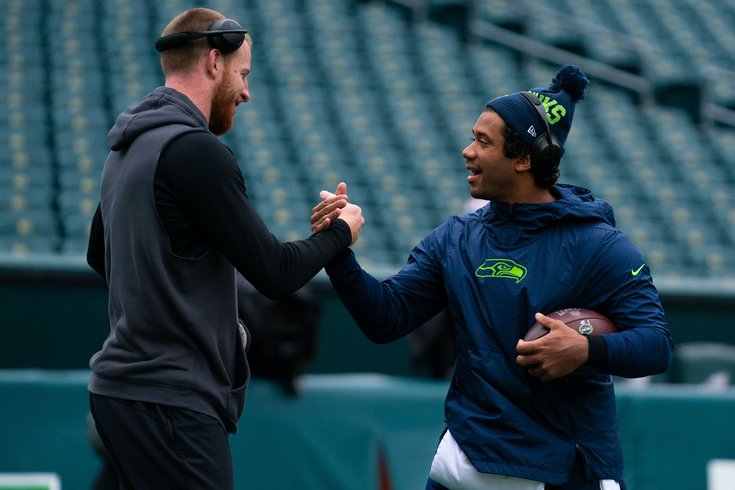 A rematch between Carson Wentz and Russell Wilson in the wildcard round is an ideal scenario for the Eagles.

As you all saw Sunday evening, the Philadelphia Eagles beat the Dallas Cowboys in their Week 16 battle for control of the NFC East. Had the Cowboys won, the Eagles' season would be over, and the Cowboys would be the first team to repeat as NFC East champs for the first time since the Eagles did it way back in 2004.

The Eagles did not clinch with their win, but they will win the NFC East with either of the following two scenarios:

OK, that's the easy part. If the Eagles do indeed win the the NFC East, they will be locked into the No. 4 seed, and will play the No. 5 seed. So who will that be?

According to amateur tiebreaker guru Deniz Selman, the Eagles' first round opponent will be either the Vikings, Seahawks, or 49ers. There is also an extremely remote scenario in which the Packers could be the 5 seed, but that involves ties, and, well, let's not get that deep into it. Excluding ties, here's a handy-dandy chart Selman put together examining all the possibilities. To note, he did this before Week 16, and subsequently blocked out the possibilities that have been eliminated:

So what does all of the above say? The most simplified way of putting it is as follows:

• The Eagles will play the Vikings if the Vikings win both of their remaining games, and the Packers win their Week 17 matchup against the Lions.

• Otherwise, they'll face the loser of the Seahawks-49ers game Week 17. That matchup is in Seattle, just FYI.

Got it? Cool. Now, of the Vikings, Seahawks, and 49ers, who would be the Eagles' most ideal opponent? I would rank them like this, in order from most ideal to least ideal:

Yes, the Seahawks have owned the Eagles in recent matchups, but the Seahawks have suffered a number of key injuries of late. In their loss to the Cardinals Week 16, they likely lost RB1 Chris Carson and RB3 C.J. Prosise for the season. They were already without RB2 Rashaad Penny (you should remember him from the Eagles-Seahawks matchup earlier this year), which left them with just rookie RB4 Travis Homer for the rest of the game on Sunday. The Seahawks are the fifth-most run heavy team in the NFL, so being without their top three backs is, you know, kind of a big deal.

They also would likely be without starting LT Duane Brown, who was questionable for Week 16, but had his knee operated on instead, and sat out. Brown's season isn't necessarily over, but it would be unlikely for him to return by the wildcard round of the playoffs. Second-year fifth-round pick Jamarco Jones started in place of Brown Week 16. If indeed Brown would be unable to go for the wildcard round, the Seahawks would be without their top two offensive linemen, Brown and center Justin Britt.

Oh, and then there's WR Josh Gordon, who got suspended again. This team would be ripe for the picking.

The 49ers are clearly very good, and their defensive line gives them a chance to win it all. However, there are two things about the Niners that would have me worried if I were them.

1) The "inexperienced quarterback in the playoffs" factor: Last year, heading into the Eagles-Bears game, we pointed out that (at the time) 31 active NFL quarterbacks had started at least 1 playoff game. Only 10 won their first playoff start. That would be an overall record of 10-21, or a winning percentage of 0.323. They were 6-12 in home games, and 4-9 on the road. Sure enough, the Birds beat Mitchell Trubisky, a neophyte playoff quarterback.

2) Their heralded defense, while threatening to opposing quarterbacks, is giving up a lot of points recently: In their last three games, the Niners have allowed 106 points overall, or 35.3 points per game. They decidedly do not have a juggernaut defense. It's certainly not as good as the Bears' defense last year, for example.

It's also perhaps noteworthy that the Niners would have to travel cross-country to Philadelphia, possibly on a short week if the game is scheduled on Saturday, after having already played a must-have road game Week 17.

In my view, the Vikings are simply the best of these three teams, and their offensive strengths (notably, throwing the ball down the field) line up better against the Eagles' defensive strengths than the run-heavy approaches of the Seahawks and 49ers.

On the one hand, the only team the Vikings have beaten this season that currently has a winning record is the Eagles, who they beat comfortably Week 6. On the other hand, at least the Vikings are blowing out the teams they should beat, as they have a point differential of +119, which is second-best in the NFC. I would be rooting for the Packers to beat th e Vikings on Monday Night Football, thus securing a matchup against either the Seahawks or Niners.