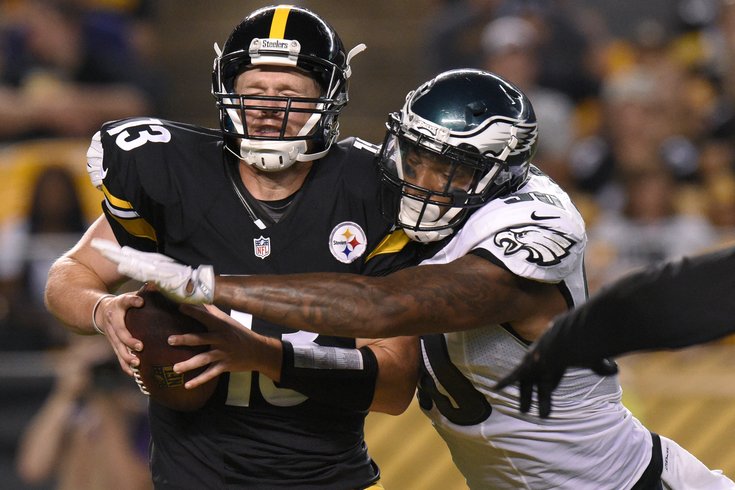 Hey look! Marcus Smith did something!

According to a report from Jason La Canfora of CBS Sports, Howie Roseman may not be done trying to work trades before the start of the 2016 NFL season.

The Eagles aren't done wheeling and dealing. Not by a long shot. Having spent a load to keep their own players and very short on draft picks after the trade for Wentz, aggressive general manager Howie Roseman will continue trying to upgrade via trade.

That move for Dorial Green-Beckham is just a portal into Roseman's thinking there -- looking for recent draft picks from other teams who haven't panned out who could fill a position of need in Philly and are young and cheap labor.

The Eagles were looking for linebackers for a while before settling on signing free agent Stephen Tulloch. They've also been sniffing around on corners, and other general managers get the sense that Roseman is always working the trade angle and trying to see who could become available.

I'd put the over/under at two on trades this team makes before the Eagles take the practice field a few days before the start of the regular season. They will be very active during the roster cutdown period, trust me.

If the Eagles are indeed looking for recent draft picks who haven't panned out with other teams, logic might dictate that they are willing to part with similar such players. Let's look at a few players on the Eagles' roster who could fetch something in return, keeping in mind that they were able to trade Dennis freaking Kelly.

Hart has been a very logical trade chip since the day Chip Kelly was fired. Kelly wanted to draft Hart in the third round of the 2014 NFL Draft but had to be talked out of it by Roseman. The Eagles eventually landed Hart in the fifth round to play DE in the Eagles' two-gap 3-4 scheme. With a new scheme in place and quality depth at DT, Hart is an oddball fit, and could be more useful to some other team.

La Canfora reported that the Eagles are shopping him:

Eagles have been shopping DE Taylor Hart, a 5th rnd pick in 2014 (and former Oregon Duck), in trade conversations with other teams

Hart actually had a decent preseason, so it's not crazy to think the Eagles could get something worthwhile in return.

The Eagles are loaded with depth at DE. They have a very good trio of Vinny Curry, Brandon Graham, and Connor Barwin, who will see the bulk of the playing time at DE this season. Behind them, they have Steven Means, who had an excellent camp, as well as a good showing in the first two preseason games, and 2014 first round bust Marcus Smith. If you want to include special teamer Bryan Braman as a DE, then go ahead and throw him on the pile as well.

If the Eagles can strengthen one of their other positions by parting with one of their defensive ends, that would make sense.

The obvious choice would be Smith, who has clearly been a disappointment early in his career in Philadephia. Maybe another team out there liked his traits coming out of college and will think they can coach him up? Or maybe Means has put out enough positive tape of his play in the preseason to coax interest from a 4-3 team in need of additional edge rusher help.

Poor safety play in the NFL has become an epidemic, and teams around the league are always looking for help on the back end. The Eagles suddenly find themselves with added depth at the safety position, with Jaylen Watkins playing well in the preseason, and Ed Reynolds being worthy of a spot on a 53-man roster.

The Birds, of course, have a great starting safety tandem of Malcolm Jenkins and Rodney McLeod, with special teams ace and competent backup safety Chris Maragos a lock to make the roster behind them. While Watkins and Reynolds have outplayed rookie Blake Countess in the preseason, they may not want to give up on a rookie so quickly.