How 'Madden' can finally fix its franchise mode 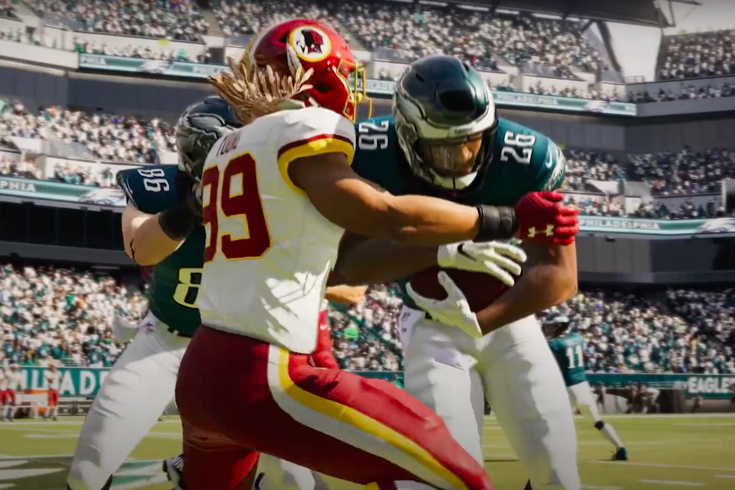 A look at Miles Sanders in the trailer for Madden 21.

On Twitter for the last few days, #FixMaddenFranchise has been trending — during a global pandemic, in the middle of a contentious election and protests against racial injustice, and as sports are finally set to resume.

People love Madden. Or, they love to hate Madden. Or they hate that they have to love Madden. That's because the game has been, well, phoning it in pretty hard over the last few years.

The game released a list of new features for its upcoming 2021 game a few days ago and, to put it lightly, fans were pretty pissed.

EA is charging $60 for Madden 21 and the only Franchise updates we get are literally PATCH NOTES & BUGS from previous years of it still being broken. It’s time for them to clean house, no one on that Madden dev team has an ounce of respect for their audience. #FixMaddenFranchise pic.twitter.com/NGFOtAgRZt

All of the above listed "improvements" could have just been fixes in a quick update to Madden '20. And while fans of the game no doubt buy it for it's relatively deep online modes (like Madden Ultimate Team and Knockout Superstar), and its occasionally enjoyable solo mode (Longshot), the staple of the game is its franchise mode.

The game, understandably, has focused almost all of its efforts on its online content, where it can make money from "microtransactions." Madden hasn't really changed this mode in seven years, and it's gotten stale and regressed. It's time for an overhaul. Fans deserve it, and guess what, EA Sports — they are willing to pay for it too.

Here are five suggestions of what we think would give NFL fans what they deserve, and how Madden should strive to improve by, well, looking toward its past:

In 2004, Madden unleashed its minicamp modes — position specific training drills that helped you improve your players heading into the regular season. I myself remember staying up all hours of the night, a high schooler with nothing else to do, trying to get a gold in every single drill.

The drill offerings went unimproved, but remained in the game until 2013 when they vanished, never to return.

This, most assuredly, would excite football fans. The current franchise set up has, well, no training camp, just four pre-season games that 95% of game-players simulate.

Give us some depth

But the game wasn't always this way. The game has, in the past, shown it can get in-depth with player analysis and provide a feel for the game that seems authentic and new every time it gets played.

What you're looking at is the DEPTH Madden 08 brought to us. First pic is a breakdown of the Cowboys RIGHT GUARD, THEIR LINEMAN! 2nd is a gameplan breakdown, 3rd is the national news, not showing the local. This is what we want @ClintOldenburg #FixMaddenFranchise @SOFTDRINKTV pic.twitter.com/gT2EJbX7WP

Other sports games have shown they can do this too. The Show's MLB franchise, which contains faults of its own to be sure, is incredibly deep. It offers great scouting, an excellent trade logic, and a level of control that puts Madden to shame.

Speaking of putting Madden to shame, anyone here play NBA2K? The franchise mode there is absolutely incredible. They have draft classes dating back to 1960 for import, so you can literally re-play history. They have expanded records (including postseason and team ones) and keep track of everything. They have five years of draft picks that can be traded, deep prospect scouting and a really in-depth offseason with a ton of tasks and features.

But where NBA2K really makes things fun it it's fully customizable team movement. In Madden, the franchise mode offers relocation, but the cities are restricted as are the team names (and have been identical for years). In NBA, you can literally move anywhere and have any name as your mascot. MLB The Show adopted this for their 2020 game. Get with the times Madden.

This has been a complaint of mine for years — since both the fantasy draft and rookie player draft have gone unchanged for almost a decade (really!). Doing a franchise, when you get to the offseason and the draft, it's pretty much first round or bust. The game has almost no players of consequence layered in the subsequent rounds. There are few, if any, hidden X-factor players, or even players with superstar or quick development.

There should be a way to find late-round gems. Not every fourth rounder should turn out to be a 62-overall player. There is a way to make it a lot more realistic and enjoyable. Mashing the scout button for first rounders and then randomly taking ones you hope will be good is kind of realistic, but not in a good way. There should be better information and scouting. It would lift the entire game mode.

This is another nit pick, and one that could be easily fixed for Madden 2021. The stats are, well, kind of off. Here's one example, based on a season sim posted by a twitter user:

As you can see, nearly every QB has a 70% completion rating in Madden. Only Derek Carr did that in 2019. Nearly every simmed quarterbacked had a ridiculously impressive touchdown to interception ratio. The NFL has changed and the sim engine has not kept up. It will certainly add to the game's realism if the stats are reflective of reality.

This doesn't seem like it should be that difficult...