Magee Rehab fundraiser draws patients from all walks of life

For 24 hours, they step up to help provide therapy for others with spinal cord injuries 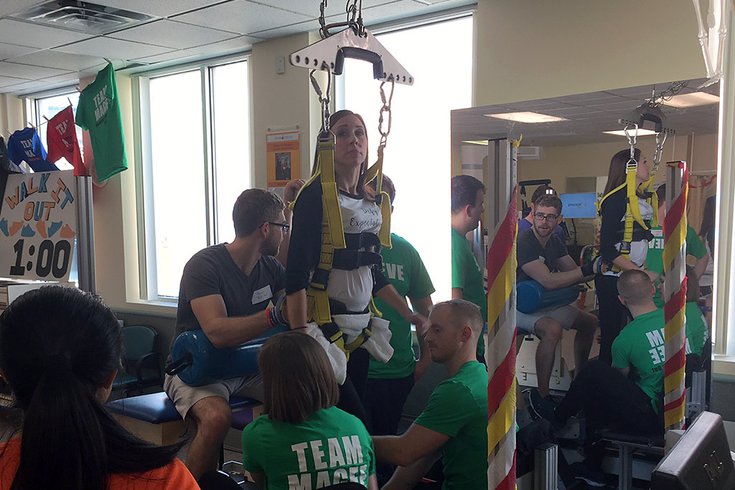 Kelly Conolly, 41, of Perkasie, Bucks County, walks on a “manual” treadmill during the "Step-a-Thon" fundraiser over the weekend at Magee's RIverfront facility in Pennsport. The former pre-K teacher and grad student was left paralyzed in a freak accident – when her heel caught a rug at home.

“Welcome to the steam room,” physical therapist Elizabeth Watson announces as she leads a visitor into the locomotion room at Magee Rehabilitation Hospital’s outpatient center in Southeast Philadelphia.

The room isn’t actually a steam room, but it is hot and humid as several people walk or run on treadmills scattered throughout the place. There’s also a good-natured energy in the air as coaches goad men and women to take one more step as Johnny Cash’s “I Walk the Line” and UNK’s “Walk it Out” blasts from speakers.

It could be any gym anywhere except some of these treadmills are robotic or outfitted with chains and pulleys to keep walkers upright. And some of the walkers, well, they can’t really walk.

Over the weekend, the center hosted a “Step-a-Thon,” an event that had current and former patients, their friends and family, and staff members walking on treadmills for 24 hours to raise money and awareness for the Christopher & Dana Reeve Foundation – and a special fund for patients at the center.

For the spinal cord injury patients in the room, the stories behind their paralysis underscore the fragility of life and their resilience and determination to win back their mobility.

It took a small team of helpers, one on each leg while a third sat behind her, holding her hips, and a pulley system to keep her upright as Kelly Conolly, 41, of Perkasie, Bucks County, walked for a half hour on the “manual” treadmill.

The former pre-K teacher and grad student was left paralyzed in a simple fall – when a heel caught a rug in her home.

“It was a freak accident in the living room,” she said after her session, wearing a big grin and a t-shirt she designed with the words "Defy Expectations" emblazoned on the front. “I didn’t get my hands down to catch myself.”

Conolly disconnected the C6 vertebrate in her spine.

“I knew instantly,” she said. “I felt like I was floating. I had no feeling or sensation in my whole body.”

That instant recognition of their sudden paralysis was described by many of the patients participating in the step-a-thon.

A PSYCHOLOGICAL BENEFIT, TOO

For Ryan Lehman, 38, a salesman outside Allentown, the moment he jumped into a pool – “something I’d done a million times” – he knew something was wrong.

It was a Labor Day picnic and the dive into the pool ended with a shattered neck. “I knew it instantly,” he said, waiting his turn on the “manual” treadmill. “Luckily, I didn’t panic and take in a lot of water. I just deadman-floated to the surface and held my breath until someone pulled me out.”

Ryan Lehman, 38, a salesman outside Allentown, raises funds on Saturday. “I love it,” he says of being on special treadmill. “It really helps stabilize my core. I really love it when they put the speed up and I can run.”

His thoracic vertebrate was, in the medical term, “incomplete” and his C6 and C7 vertebrate “were in a million pieces,” as he described it. For the first two months after the accident he was on a ventilator and a feeding tube. That was 10 years ago.

On Saturday, he was participating in his fourth step-a-thon.

He is helped on the manual treadmill – after Magee staffers had taped his ankles where they planned to hold his legs and help him walk.

“I love it,” he says of being on the machine. “It really helps stabilize my core. I really love it when they put the speed up and I can run.”

There is also a psychological benefit, he noted.

“You’re eye-to-eye with people,” Lehman said after his 45-minute session.

Always being “at a sitting level you feel less a person,” Conolly said. “It’s nice to stand and have a connection with someone eye-to-eye.”

For Rachied Blythe, 47, a former SEPTA bus driver, working with the differently-abled was all part of the job.

Then came the 2013 accident in the Dominican Republic, when the Philadelphia resident dove into the ocean and hit a sandbar. He badly damaged his C5 vertebrate. He can’t use his legs and has limited use of his hands. For his step-a-thon contribution, he tackled the robotic stepper, where mechanical arms helped move his legs. 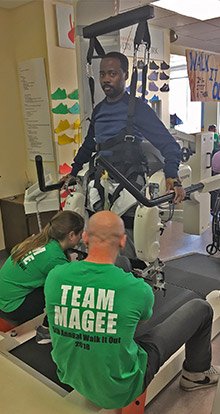 Rachied Blythe, 47, of Philadelphia, did his part for the fundraiser on a robotic stepper. Working out on the machine “gives me hope to get my life back, not necessarily back to my old life because that life is gone.”

Using the machine and the efforts of the center and the Reeve Foundation “gives me hope to get my life back, not necessarily back to my old life because that life is gone.”

Watson, along with fellow staff member Erin O’Donnell came up with the fundraising idea of a step-a-thon after working with patients and casually mentioning to each other they could do this “24 hours a day.” That was five years ago. Since then, other rehabilitation centers have held similar events.

In addition to the foundation named for the late actor Christopher Reeve, of "Superman" fame, who was paralyzed in a horseback riding accident, the event also raised money for a special fund for patients who are making progress in rehab, but whose insurance offered limited coverage.

“Some insurance only covers 20 visits, while a patient may need 200 visits” to recover, Watson said.

“There is life after an accident like the one I had,” Conolly said. “It’s difficult to see when you’re newly injured and there are still some challenges. But there is a way back.”

And she should know.

A few years after her devastating injury, Conolly and her husband had their second daughter.