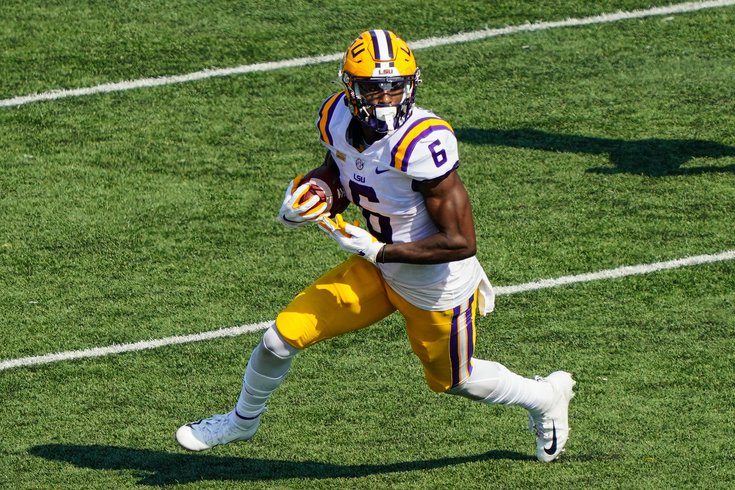 LSU's Terrace Marshall could make sense for the Eagles if they don't draft a WR with the 12th overall pick.

Question from Kephas: What are the odds the Eagles trade up into Round 1? It occurred to me that the suspense of Thursday night's first round is over much sooner with an earlier pick (as opposed to usually waiting until late teens/early 20s). Do we watch until pick 12 and then check back in on Friday night?

First, when it comes to moving around in the draft, the Eagles do it as much as anyone. Add in that they have 11 picks in this draft, and sure, they're candidates for pretty much anything when it comes to trades, mid-draft.

The Bills and Ravens make some sense. Using the draft value chart, the Eagles' second pick in the third round (pick No. 84) should be able to get them up to either 27 or 30, if either of those teams wanted to move out. The Bills would probably also have to give back a later-round pick.

And then if the Eagles wanted to get a little bolder, they'd also have the ammo to move up to 20 or 21 with the Bears or Colts. That would likely cost them their first pick in the third round (pick No. 70), plus maybe their fourth- or fifth-round picks. I think they'd have to really love a player to try to get up that high.

Follow-up (sort of) from Kephas: When is the last time the draft value chart was updated? If not, should it be?

Yep, Rich Hill of Pats Pulpit created one a few years back that's logical. I have no idea if teams around the league use it.

Question from Deathorglory: What's the deal with Zach Ertz? He's not really going to be on the team, is he?

Tl;dr on that last paragraph: They'd have an extra $3.5 million or so to work with this offseason.

That extra $3.5 million on its own would be right around what the Eagles would need to sign all their rookie draft picks. If all they received were crappy offers from other teams around the league for Ertz (which would make sense), the Eagles are better off just waiting to move on from him until after June 1.

Question from Nate: If the Eagles go defense in Round 1, how would you rank the WR's after Ja'Marr Chase, DeVonta Smith, and Jaylen Waddle for the 2nd round (or a trade up into the back end of Round 1)?

At some point I'll rank all the receivers in this draft, since the Eagles are likely to take at least one. In looking at who might be available in Round 2, or who you might have to trade up into Round 1 for, I think that's where you have guys like LSU's Terrace Marshall, Minnesota's Rashod Bateman, Florida's Kadarius Toney, Purdue's Rondale Moore, and Ole Miss' Elijah Moore.

The Eagles have reportedly been talking "a lot" with Marshall, which I think makes sense. When you look at the types of receivers that Marshall, Bateman, Toney, and the Moores are, Marshall has the most size, and would probably make the most sense from a needs perspective as an X receiver to pair with Jalen Reagor as the Z.

Personally, I like Bateman a little more than Marshall, but I can see why the Eagles are doing extensive homework on Marshall.

Question from Alex: If Kyle Pitts somehow ends up on the Cowboys, how scared should Eagles fans be on a scale of children's birthday party clown to Pennywise?

They'd surely have quite a collection of talent at the skill positions on offense. BUT...

If they landed Pitts, whether that be at 10 (almost no way he falls that far) or via trade up, there's zero doubt that Dallas would be hyped as Super Bowl contenders for the eleventy billionth straight season. So, I wouldn't sweat it to hard.