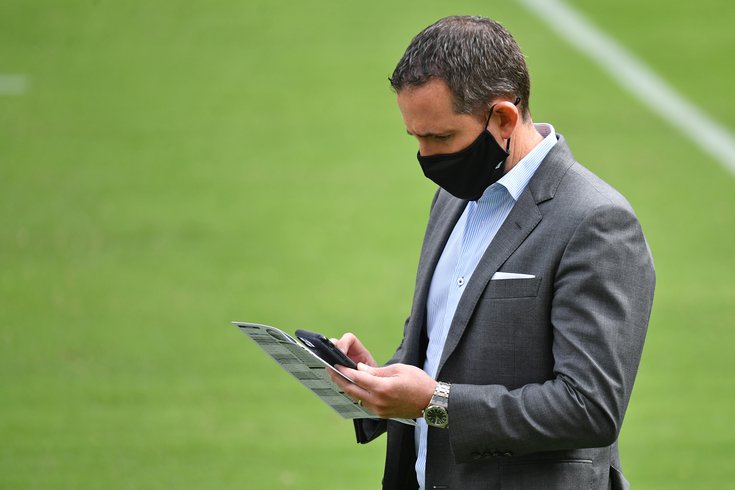 The Philadelphia Eagles tend to move around in the first round more than most. In fact, as you're all well aware, they already have this year. They traded the No. 6 overall pick in this draft for the No. 12 overall pick, plus a first-round pick in 2022.

Now that they're sitting at pick No. 12, could they move again?

First, we'll recap the last 22 years (since the beginning of the Andy Reid era), showing the Eagles' picks in the first round of the draft, and then we'll determine their best course of action in the 2021 NFL Draft:

The best players are probably still from the "trade up" group.

The following is a list of trades made either at the 11th, 12th, or 13th overall pick, just for purpose of providing a historical sense of what it might cost to move up, or what can be gained by moving back. Trades involving players omitted.

Should the Eagles trade back again from pick No. 12?

If the Eagles couldn't land their quarterback, then trading back was a logical move, in my opinion, especially in this particular draft, where the talent level between the non-quarterback you might land at pick No. 6 isn't that much different than who you might land at pick No. 12. Or perhaps better stated, it's not so different that you'd turn down an extra first-round pick in 2022 to make that move.

However, the feeling here is that there is potentially a more substantial dropoff from who the Eagles might land at pick No. 12 and who they would have to settle for later in the teens.

If a quarterback like Mac Jones were to still be available at pick No. 12, and a quarterback-needy team like, saaayyy, the New England Patriots or the Chicago Bears came calling, and the offer was too good to pass up, then sure, the Eagles would be smart to consider all options.

But ultimately, with 11 picks in 2021 and 9 picks already in 2022, the Eagles should have no further urgency to move back again.

Should they stay put at 12?

First, let's try to figure out what positional players are worth taking if you're the Eagles at pick No. 12. In my view, the following players, in no particular order, would range anywhere from "Yes please!" to "golf clap."

• Michigan DE Kwity Paye, or (fill in your preferred edge rusher here): Position of need, and a position of priority, but is Paye (or another edge rusher in this draft) worth the 12th pick?

• Northwestern OT/OG Rashawn Slater and USC OT/OG Alijah Vera-Tucker: Both Slater and Vera-Tucker were standout tackles in college, but most believe their futures in the NFL are at guard. The Eagles' roster, as currently constructed, does not offer any starting opportunities at guard, so either of these guys would sit as rookies, or the Eagles would have to find a way to deal Brandon Brooks for adequate compensation. (It's at least mildly interesting that "trade interest" in Brooks was either leaked or conjured up a short while back.)

Anyway, getting back on track, the initial seven prospects listed above would be ideal. The last three, less so. So what are the chances of one of those seven ideal guys falling to pick No. 12?

Well, three quarterbacks are almost certainly coming off the board at picks 1, 2, and 3, to the Jaguars (Trevor Lawrence), Jets (Wilson), and 49ers (Trey Lance, Justin Fields, or Jones).

The Eagles would need for (a) at least one more quarterback to come off the board before their pick, which feels very likely, and (b) they would need one team to take a fifth QB, Slater, Vera-Tucker, Penn State LB Micah Parsons, any edge rusher, or some other weird pick, for any one of the sexy seven to fall to them. Again, in my view, that feels likely, with Slater or the fifth QB being the best possibilities.

Should they trade up?

It's hard to find many logical reasons for the Eagles to trade up. If they really like either of the corners (Surtain, Horn), then wanting to move ahead of the Broncos at 9 and the Cowboys at 10 would make some sense. The Panthers at 8 probably wouldn't mind moving back to recoup some picks after trading three of them for Sam Darnold.

Barring an offer they can't refuse, the Eagles would probably be best served to stay put at pick 12.