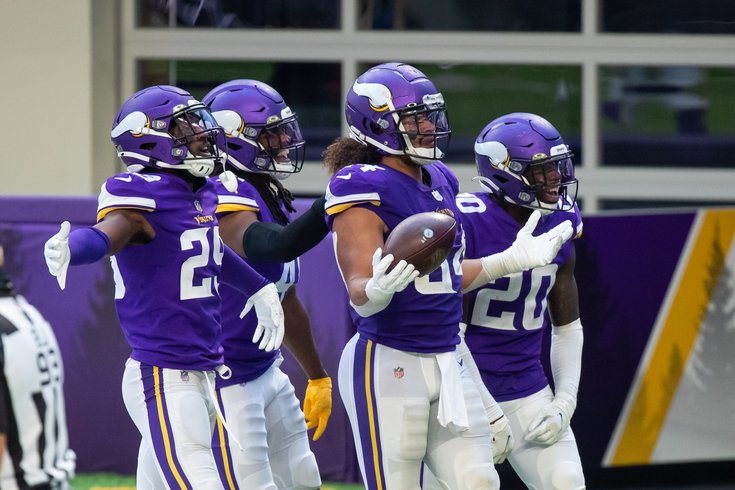 It had been quiet on the Eagles free agency front for some time, almost too quiet. So perhaps it shouldn't have been a surprise when the team made some news on Wednesday evening by adding a pair of players on one-year deals.

One of the players, Jordan Howard, is well known to Eagles fans after his two previous stints in Philly. The other, linebacker Eric Wilson, is more of an unknown. So today, we figured it was a good idea to take a look at what the local media is saying about the newest member of the team, from what he was able to accomplish in Minnesota after going undrafted out of college to what his arrival means not only to the Eagles current linebackers but also to their chances of taking one high in this month's draft.

Let's dive right in, shall we?

The good with the bad

We'll get into Les Bowen's story over on Inquirer.com in a second, but first it's worth noting that while Wilson wasn't an expensive addition for the Eagles, he could wind up having a big impact on the field. And not just because of the current state of the Birds linebacking corps (more on that in a minute). There's another reason to like Wilson, something former defensive coordinator Jim Schwartz would have appreciated: his versatility.

Eric Wilson signing is a great move by the #Eagles!

Has played every LB spot in this Vikings defense over last few seasons... Most a SAM down on LOS. Good speed, read/react with thick core that can battle/absorb contact

Moreover, with new DC Jonathan Gannon expected to run a scheme that utilizes a lot of nickel and dime packages, the linebackers become even more important because there will often be fewer of them on the field (I know that sounds counterproductive, but with fewer LBs on the field, the ones who are out there will have a smaller margin of error).

Unfortunately, the one area where that would be extra important is against the run, which also happens to be the area where Wilson really struggles. While he was one of the better coverage linebackers on the market, he's equally as bad as a run-stopper.

There's also this quote that was passed along to John McMullen, which doesn't exactly inspire a lot of confidence.

The book in Eric Wilson is very good in coverage, not so good in run support. Very athletic LB who makes plays. Became a three-down guy due to Anthony Barr's torn pec. Best quote I got on him from a source in Minny. "Like a 20-point scorer on a bad NBA team." #Eagles #NBA

So, what exactly did the Eagles get in Wilson? As promised, here's more from Les:

The NFL Network said Wilson signed for one year and up to $3.25 million. It’s fair to speculate that after a breakthrough season, in which fellow Vikings linebacker Eric Kendricks called him a “walking turnover,” Wilson was expecting more from the free-agent market. Three weeks into that job fair, the Eagles offer him a chance to start -- their linebacking corps was among the worst in the NFL last season -- and another shot at the market next year.

Wilson is reputed to be good as a blitzer and in pass coverage (78.9 opposing passer rating last season), not so good in run support, where Pro Football Focus gave him an awful 38.3 grade.  [inquirer.com]

Honestly, what did you expect from a bargain signing this late in free agency? If he can continue to be dominant in coverage and create turnovers, his shortcomings against the run will be a lot easier to swallow.

Plus, this feels like a low-risk, high-reward signing, as Wilson is still young enough that if he impresses Philly during what will be a rebuilding season, he could earn himself another, longer deal next offseason.

Solid, but 'nothing special'

Over at Iggles Blitz, Tommy Lawlor wrote about what likely attracted the Eagles to Wilson despite some struggles in the ground game.

The tape shows a solid player, but nothing special. There is a reason a 26-year old LB coming off a career year doesn’t have much of a market. He doesn’t have great size or speed. He’s not special in any way. His tackling can be a bit sloppy. There are times when he reaches rather than aggressively wrapping up.

While he isn’t Seth Joyner or Byron Evans, Wilson is a good addition to the Eagles. He fits in terms of age and price. Wilson is versatile. He can play up on the LOS, in the middle or out in space. He will know the scheme or at least parts of it.

That last part is especially interesting. Unlike Taylor and Bradley, Wilson went undrafted. But other than that, the trio have a lot in common. Both struggled to get onto the field early in their careers and were mainly special teams players. Perhaps a guy like Wilson, who has climbed his way up the Vikings depth chart over several seasons until he became a full-time starter can set a good example for the kids. And sure, injuries paved the way for Wilson to become the full-time starter in Minnesota, but once he got the opportunity he took full advantage of it.

Between him and Alex Singleton, there should be plenty of wisdom to share.

Speaking of Singleton, Reuben Frank of NBC Sports Philadelphia believes that it would make sense to pair him with Wilson when the team goes with DB-heavy packages, especially since their skills complement each other, with Singleton being better against the run and Wilson thriving on passing downs.

What then becomes of T.J. Edwards?

It will be interesting to see what role T.J. Edwards has. Edwards played 490 snaps in 12 games last year, and that’s 67 percent of the snaps in the games he played. Edwards’ strength is against the run, and while he did show some improvement in coverage in his second year, I wouldn’t expect him to have a significant role anymore on passing downs.

Most teams rarely have three linebackers on the field at the same time, and if Gannon adopts the Mike Zimmer scheme, as expected, the Eagles will be in nickel and dime a ton. Possibly to the point where 4-2-5 may even be considered base.

All of this is dependent on down, distance, score of the game, special teams reps, but I’d expect Singleton to be the workhorse, on the field almost all the time, with Wilson the second linebacker in all but the most obvious running downs and Edwards getting on the field on clear running downs, either with Singleton or with both Singleton and Wilson.  [nbcsports.com]

How does this impact the draft?

Over at The Athletic, Zach Berman thinks the Eagles got good value with this signing — and not just because he already painted himself into a corner when he previously wrote about Wilson being a great fit (and at a greater cost).

Berman also compared him to the addition of Nigel Bradham, who played a key role for the Birds for several seasons.

This should be viewed as a good signing for the Eagles. If they had targeted Wilson in the first week of free agency, it would have been a sensible addition considering his age, production and scheme fit. He’s not a top-of-the-market player, although Sheil ranked Wilson as the fifth-best off-ball linebacker available in free agency. To get him at a reasonable price on a one-year deal represents good value.

There’s a degree of skepticism considering the Eagles’ ill-fated recent history of signing linebackers, but this is more comparable to the Nigel Bradham addition in 2016 than the Corey Nelson addition in 2018. The fact that he lingered on the market as long as he did might suggest what the league thinks of him, although it’s not as if the Eagles exhausted significant resources to add him. During the first week of free agency, I wrote that Wilson was a player whom I would make a top target for the Eagles. At the time, I thought such a signing would require more years and dollars. So it would be hypocritical for me to pan this signing, and I’ll give them credit. Their defense is better because of the addition.  [theathletic.com]

So what about the draft? The Eagles were rumored to be looking at linebacker later this month, when they'll have 11 picks. It's one of the team's biggest areas of need, and this signing doesn't change the fact that Howie Roseman will likely add (at least) one in the draft. What it does do, however, is give the Birds some flexibility and allow them to draft more of a project-type player than a guy who would need to start right out of the gate (not unlike last year when they took Davion Taylor and Shaun Bradley).

Draft impact: It was unlikely the Eagles were going to draft a linebacker in the first round and adding Wilson shouldn’t inhibit the team from taking one at some point in the draft, even on Day 2. But there should be less urgency about needing to add a starting-caliber option in the draft — if they even had that urgency before. Considering Wilson’s age, it’s reasonable to think they would want to re-sign him to another deal in 2022 if he performs well this season. Regardless, the Eagles should continue adding cost-controlled players who could become potential starters. Look for that to happen on draft weekend.  [theathletic.com]