Historically, traded Eagles quarterbacks have stunk with their new teams 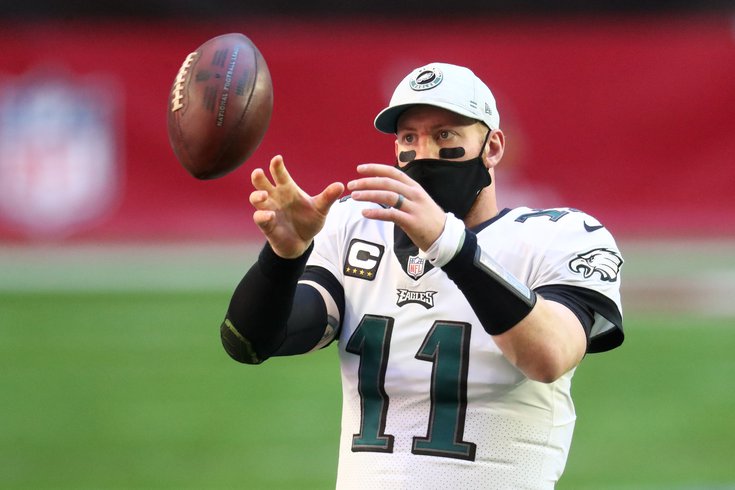 Carson Wentz is the 11th quarterback the Eagles have traded since the start of the Andy Reid era.

The Philadelphia Eagles trade their quarterbacks. A lot. But it had been a while when they dealt an unhappy Carson Wentz to the Indianapolis Colts in February. The most recently traded Eagles quarterback was the one who made way for Wentz, Sam Bradford, AKA Sleeves, AKA Sammy Sleeves, AKA Sleevie Wonder, in 2016.

Let's take a trip down memory lane, and look at how those quarterbacks fared with their new teams. Spoiler: Badly. That's not to say that the Eagles exactly got over on all their trading partners, as the players they drafted with the acquired picks in those trades haven't exactly lit the world on fire either.

Let's go as far back as the start of the Andy Reid era (yes, this would eliminate the quarterback trade that backfired on the Eagles a long time ago, Sonny Jurgensen).

Peete was traded to the Washington Football Team for a 2000 sixth-round pick. He played in three games for the Football Team, attempting just 17 passes before moving on to Oakland the following year.

With that sixth-round pick, the Eagles selected C John Romero, seven picks before Tom Brady was taken by the Patriots.

Hoying was traded to Raiders for a sixth-round pick. He had seven pass attempts for Oakland over two years before he retired in 2001.

With that sixth-round pick, the Eagles selected center DE John Frank, 21 picks before Brady was taken.

Feeley was traded to the Dolphins for a 2005 second-round pick. He saw action in just 11 games in Miami, posting a horrendous 61.7 QB rating. Midway through the 2005 season, the Dolphins traded Feeley to the San Diego Chargers for Cleo Lemon.

With that second-round pick, the Eagles selected WR Reggie Brown, who caught 177 passes for 2,574 yards and 17 TDs in five seasons in Philadelphia.

Holcolm was traded to the Vikings for a sixth-round pick in 2009. He played in three games for the Vikings in 2007, posting a 73.1 QB rating. He retired the following offseason.

The Eagles then traded that sixth-round pick along with the 21st overall pick for the 19th overall pick in the 2009 draft, and selected Jeremy Maclin.

The Eagles selected Nate Allen with that second-round pick. The fourth-round pick turned into LB Casey Matthews and a 2012 fourth-round pick, which was used along with another draft pick to acquire LB DeMeco Ryans in a trade with the Texans.

Kolb was traded to the Cardinals for a second-round pick and CB Dominique Rodgers-Cromartie. Kolb ended up starting just 14 games for Arizona, posting a QB rating of 83.2 in two years there. He suffered a slew of injuries, including turf toe, a concussion, and a rib injury, before the team asked him to take a pay cut. When the Cardinals and Kolb could not come to an agreement on a restructured deal, they cut him.

After a trade back, that second-round pick became DE Vinny Curry and CB Brandon Boykin.

Foles was traded to the Rams along with a second-round pick for Sam Bradford. In his only season with the Rams, Foles was arguably the worst starting quarterback in the NFL, posting a 69.0 QB rating before being benched in favor of Case Keenum. He was released after one season and signed with the Chiefs, before returning to Eagles, and yada yada yada, a million-plus fans in the streets of Philadelphia chanted triumphantly about the size of his genitalia.

Barks was traded to the Cardinals for a seventh-round pick. He was a regular on the Cardinals' inactive list during the 2015 season, never getting into a single game. The Cardinals eventually released him.

The Eagles selected LB Joe Walker with that seventh-round pick.

The Sanchise was traded to the Broncos for a conditional seventh-round pick. Sanchez lost a quarterback competition to a Trevor Siemian, a guy with zero career pass attempts at the time. He never made Denver's 53-man roster, so the pick never conveyed.

After then-Vikings QB Teddy Bridgewater suffered a gruesome, career-threatening leg injury in practice just before the start of the 2016 season, Sleeves was traded to Minnesota for a first-round pick in 2017, and a 2018 fourth-round pick that could have become a third- or a second-round pick based on unlikely conditions that weren't met. The Vikings started 5-0, but lost 8 of their next 10 games and did not qualify for the playoffs. Bradford's play looked better in the stat sheet (he completed 71.6 percent of his passes) than it did in reality, as he never met a checkdown that he didn't embrace.

Bradford finished the 2016 season with a 7-8 record. He played two games in 2017, both wins, but was shut down for the season after wear and tear eroded away on his surgically repaired knees.

The Eagles selected DE Derek Barnett and DE Josh Sweat with the two picks acquired in that trade.

A snapshot of the traded Eagles quarterback stats with their new teams: