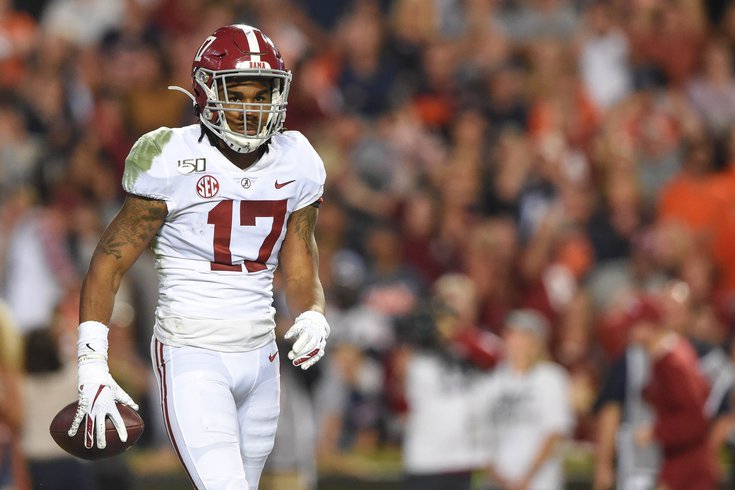 As a reminder, after the Carson Wentz trade, and the move back from pick No. 6 to pick No. 12, the Philadelphia Eagles currently have 11 draft picks this year, with two in the third round, three in the sixth round, and two in the seventh round. Here were versions 1.0, 2.0, and 3.0, in case you missed those.

Last week, we went a long way to point out that there's a pretty good chance that as long as at least one of the top three receivers -- LSU's Ja'Marr Chase, or the two Bama receivers, Jaylen Waddle or DeVonta Smith -- survives the first seven picks, they should also make it all the way to pick No. 12, where they'd probably be too hard to pass up.

The most likely receiver to fall, in my opinion, is Smith, but we already used him in a previous Eagles-only mock, and since we don't repeat any players, we'll go with a scenario in which Waddle falls to the Birds.

Waddle's game is all about speed. In the video below, watch how many times it looks like a defender has an angle on him, and then... nope.

Through the first two years of his career at Bama, Waddle was relegated to the slot, as he played alongside other first-round receivers like Jerry Jeudy and Henry Ruggs. In 2020, he was poised to take on a much bigger role in the Alabama offense, which he did initially, catching 25 passes for 557 yards (22.3 YPC) and 4 TDs in just 5 games, before a suffering a broken ankle.

In addition to his game-breaking ability as a receiver, as you can see in the video above, Waddle can also change games as a returner. He has 3 return TDs in his college career.

Newsome is an outside corner with good length, who had an outstanding Pro Day, for what that's worth, running an unofficial 4.38 40, vertical jumping 40 inches, and broad jumping over 10 feet, for a relative athletic score of 9.66.

His fit with the Eagles is also intriguing in that he played a lot of off coverage at Northwestern, and it is believed that corners will be asked to do the same in Jonathan Gannon's scheme in Philadelphia. A quick look:

Newsome has begun sneaking into the first round of many a mock draft of late, likely because of his impressive pro day, but he also comes with concerns. To begin, he only played in 17 collegiate games, and never played a full season at Northwestern. He also only had 1 INT over his college career, though it should be noted that his ball skills are perfectly fine, as he had 20 PBUs in those 17 games.

Still, Newsome would make a ton of sense for the Eagles, whether that be at pick 37, or even with a slight trade up into the tail end of the first round, seeing as they have 11 picks in this draft.

Basham is a thick, powerful rusher who gives off some Brandon Graham vibes, who plays on both sides, can also shift inside on obvious passing downs, and is a good run stopper. He also has a good repertoire of pass rush moves, and he's a high-energy player.

Again, like Newsome above, if Basham is still there at pick No. 70, he's an easy player to pick. If you have to move up a bit into Round 2, go right ahead.

Carter and Javonte Williams formed the best RB tandem in the country in 2020. It was fun watching Carter and Williams absolutely wreck the Miami defense last season when Carter ran for 308 yards, and Williams ran for 236. Here was Carter's day:

Carter has been involved in the UNC offense since he was a freshman, and he put up huge numbers as a senior:

Carter was also a productive receiver out of the backfield, as he had 82 career catches for 656 yards and 6 TDs. He also returned kicks, though he didn't have any return TDs. Despite being a part of UNC's offense for four years, Carter doesn't have a ton of mileage on him, as he has fewer than 600 touches over his four-year college career.

Basically, Carter is a souped-up Boston Scott. If you're of the mindset that the Eagles already have a Boston Scott on the roster at a cheap cost and you're fine with what he gives you, then you wouldn't have interest in Carter. If you think Carter can make a bigger impact in the way the Eagles use Scott and are willing to expand that role, plus you're aware that Scott will have a more expensive restricted free agent cap number on the horizon, then Carter makes sense here.

MORE: WTS: How much cap space do Eagles have left for free agents? How can they get more?

Brown is a mammoth guard-only prospect, who is likely to become a starter in the NFL. From the Eagles' perspective, he can either take over for Brandon Brooks at some point at RG, or for Isaac Seumalo at LG, if Seumalo moves to center whenever Jason Kelce retires.

Note that Brown practiced both at LG and RG at the Senior Bowl in January, so he can be a mildly versatile left-right backup until a starting opportunity becomes available:

If you have a few minutes to spare and want to watch Brown mashing guys in the run game for Bama, you can do so here.

Brown struggled with weight at times during his college career, and he got suspended for 6 games, so there are a some flags, but those flags are also why he might be available in the fourth round in the first place.

Snowden is a long, lanky, spider-like linebacker for Virginia who could perhaps develop over time into something of an Anthony Barr role in the Eagles' defense under Gannon. Over the last three seasons, Snowden has 13.5 sacks and 28.5 tackles for loss, so he clearly has the ability make plays on the other side of the line of scrimmage.

He also had 15 pass breakups and a couple of INTs over the last three seasons, and could be a good fit in a defense playing a lot of zone because his length and long arms can get in the way of throwing windows. A look:

The challenge for Snowden will be bulking up so that he can play on early downs. Until then, he'll be a liability against the run, and would only realistically be a sub-package player, which is fine at this stage of the draft.

In the 2022 NFL Draft there will of course be the top five quarterbacks who go off the board potentially in the first 10 picks, but surely at least in the first round:

Thereafter you have a few guys who could go Day 2, or perhaps early on Day 3:

The quarterback that I believe makes the most sense for the Eagles on Day 3 after the eight quarterbacks above, should they opt to take a flier on a developmental guy to learn behind the scenes and be inactive on game day initially is Georgia's Jamie Newman.

Newman is a bigger quarterback who possesses a lot of the same skills (mobility, power, a good enough arm, and poise under pressure) as Jalen Hurts. He has also struggled with accuracy, like Hurts. Anyway, the point here is that if Hurts proves that he's a starting caliber quarterback during the 2021 season and Newman can develop into a capable backup, then the Eagles wouldn't have to completely change their offense should Newman have to enter a game for Hurts in 2022 and beyond.

So why would he be available in the sixth round? While Newman has a lot of tools, he is also far from a finished product, and he had a weird college career that talent evaluators will have to sort out. He lost a quarterback competition early in his Wake Forest career to John Wolford, and then transferred to Georgia, only to opt out just before the start of the 2020 season.

Stevenson is a bulky runner who would give the Eagles a short-yardage presence. In his two seasons at Oklahoma after transferring from a JUCO school, Stevenson had good numbers in limited action:

Stevenson has a 6-game suspension (for a positive THC test) to his credit, so teams will have to investigate that.

I like him as a power complement to the more dynamic Miles Sanders, and as a guy who could also even play some... drumroll... fullback!

Like the 2020 NFL Draft, the 2021 draft is once again loaded with wide receiver talent, so you're going to see fourth- and fifth-round prospects fall to the later stages of Day 3. One guy that I like who could be available late who has an impressive blend of size and speed (unofficial Pro Day 4.37 40) is Fehoko, who has a floor as a special teamer.

Fehoko didn't catch a ton of passes at Stanford, but the ones he did catch were impactful:

That might give some folks a Mack Hollins vibe, which, alright, not the comp Eagles fans want to hear, but this is the type of player you try to draft and develop in Round 6 when you have 11 picks.

Undersized DT prospect who had 15 sacks in 26 collegiate games.

On Easter Sunday, we profiled the lone punter on the Eagles' roster, Arryn Siposs, and came to the conclusion that the Eagles should give him competition in training camp.

Again, I plead with you, Eagles. Give me a punter competition to cover in training camp.