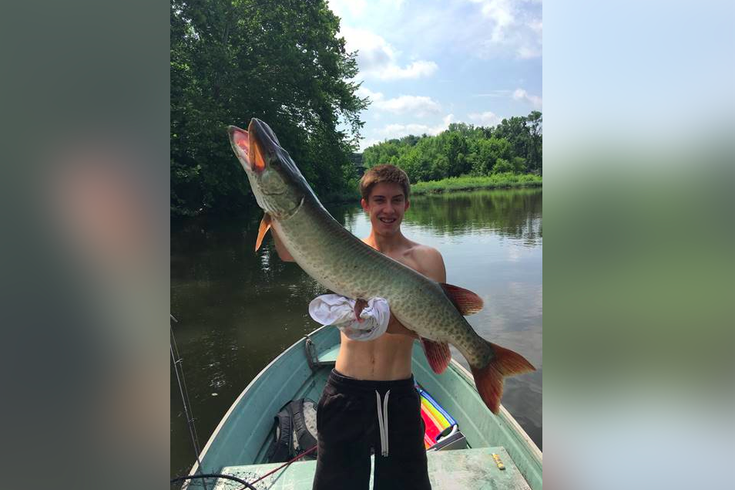 A local man's freakish catch in the Schuylkill River has people from across the Delaware Valley crying Photoshop.

Nope, it's the real deal, according to the Schuylkill River Greenways National Heritage Area.

In a news release on Monday, the organization highlighted the fish caught by Kevin Rodenbaugh, a 20-year-old King of Prussia resident who's been fishing in the area for the past few years.

Rodenbaugh caught the muskellunge, also known as a muskie (or musky), on July 17 at a secret fishing location in Norristown. The fish measured about 45 inches long and weighed between 30-40 pounds.

“That’s actually the first muskie I’ve ever caught,” said Rodenbaugh, who released his prized catch back into the river.

The catch was close to the muskie state record, which currently stands at 54 pounds.

It wasn't an easy operation, Rodenbaugh explained. He and a friend spotted the fish in the water, but they were using light poles at the time and weren't properly equipped to handle something of that size.

Without a leader on his line, Rodenbaugh threw a big spinner bait in the water and the muskie bit. A lengthy struggle with a net no bigger than the muskie's head brought the fish under control.

“He was jumping out of the water like a tarpon. It took like 15 minutes to get him in,” said Rodenbaugh.

The struggle was so intense that Rodenbaugh sliced his finger open when he reached his hand under the muskie's gill.

When Rodenbaugh posted his picture on Facebook, it quickly went viral. Many commenters doubted the authenticity of the photo, which didn't surprise Rodenbaugh. His mom said the same thing to him.

The Schuylkill River Greenways organization said the muskie's presence was attributable to improvements in water quality. For decades, the river was polluted by the transport of coal and manufactured goods.

“The improvement in water quality up and down the Schuylkill River has been remarkable over the last 20 years, largely due to the incredible efforts of many dedicated partnerships and collaborations, including the Schuylkill Action Network and Schuylkill River Greenways’ River Restoration Fund,” said SRA executive director Elaine Paul Schaefer.

“Working together, these organizations have funded millions of dollars toward projects and programs that directly and positively impact water quality, and these investments have paid off," Schaefer continued. "The Schuylkill River is now healthy enough to support a robust recreational industry, including kayaking, boating and fishing.”