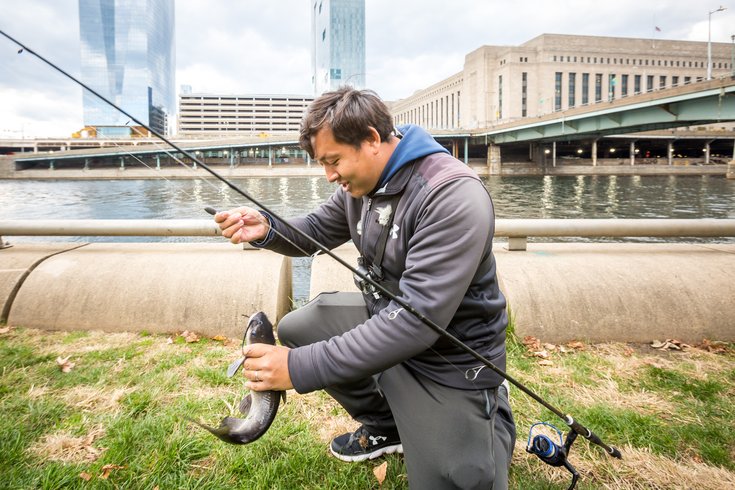 Leo Sheng, author of the popular "Extreme Philly Fishing" videos on YouTube, prepares to take a channel catfish off the hook along the Schuylkill Banks near Walnut Street in Philadelphia.

It's about two-and-a-half hours into his daylong fishing session on the Schuylkill Banks in Center City, and Leo Sheng finally has a bite.

His thoughtful, explanatory demeanor quickly builds into the excitement of a true showman. As the line on his rod ascends above the waters of the river, he exclaims, "First catfish of the day!" speaking to the GoPro strapped to his chest, recording footage that will later be broadcast on YouTube to more than 100,000 subscribers.

"It's the soap, man," Sheng says, referring to the Irish Spring bar soap he's using as bait; soap — at least the cheaper brands – has animal fat in it, and "catfish love fat."

Once the fish is reeled in and Sheng has it in front of his camera, he reverts back to his instructional nature, explaining to his viewers what kind of fish they're looking at and why the soap was effective. As a part-time tutor, teaching comes naturally, and he tries to make his YouTube channel, Extreme Philly Fishing, a blend of education and entertainment. 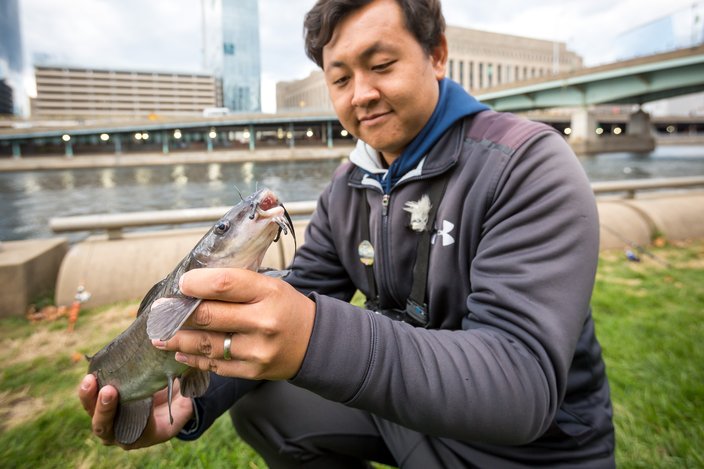 Leo Sheng poses with the 2,480th fish that he has caught in 2017, while fishing along the banks of the Schuylkill River on Thursday, November 16, 2017.

Sheng, who lives just outside of the Somerton neighborhood of Northeast Philadelphia, travels all over the Delaware Valley, sharing his fishing tips and adventures to his thousands of followers. It's been successful, but not quite successful enough to become a full-time venture, Sheng's ultimate goal. In the big pond of anglers who've turned their passion into a business, Sheng, 28, certainly isn't a minnow, but he's not quite a trophy fish yet, at least according to his standards.

What's unmistakable in Sheng's videos is his enthusiasm. It's evident in a recent video from Neshaminy Creek when he catches his first bluegill of the day. "Dude, nice bluegill! Holy moly!"

Sheng uses a looping system on his GoPro in order to ensure he doesn't miss any of the action. On the two or three days a week he films — each of which can last up to eight hours — his camera is constantly recording, requiring him to carry 10 batteries with him.

The footage doesn't save, however, unless he manually stops the recording. When that happens, the camera saves the last five minutes of footage. As a result, he doesn't have to worry about remembering to hit record when a fish bites, and doesn't accumulate hours of worthless video.

"I'm waiting for the moment when the fish is going to strike, and that is the moment that I film the footage for YouTube," Sheng says, quickly noting his reactions aren't manufactured. "Sometimes it is just genuine excitement. Sometimes you catch something rare, sometimes you catch a fish that you've never caught before, a big fish."

Sheng is not a trophy hunter. His niche is trying to catch as many different species of fish as possible, recording and photographing all in an online, searchable database. (He notes that he throws back nearly all his catches; a tiny fraction is brought home to eat.)

"It took me two years to get to this point," Leo Sheng says of building up Extreme Philly Fishing. "It wasn't easy."

He also fashions himself a bit of a purist in the world of online, celebrity anglers. Instead of multiple cameras and high-end productions, Sheng essentially uses only his GoPro, and instead of up to 9 hours of editing — typical for some YouTube fishing channels – he only spends about two hours on his videos, just enough to work out the kinks. It's a stark contrast from, say, from Joshua Jorgensen's BlacktipH channel, one of the premiere fishing YouTube accounts that features celebrities and videos that look like Hollywood productions.

Not only are the cameras for such videos incredibly expensive, but such productions don't really fit Sheng's audience.

"Sometimes you have that dad, with three kids, and all the time he can muster to go out and fish is during the weekends," Sheng gives as an example. For the people who don't have time to research locations and fish species on their own, Sheng's videos provide a service.

Sheng's family is originally from China, but he was born and raised in Brazil until he was 17. He moved to the States and got a bachelor's degree in physics at Temple University. Upon graduation, he was faced with a choice: go back to school for a Ph.D., or try something else. Uninterested at the prospect of becoming a professor, he started his own tutoring business – teaching science to kids.

It wasn't until two years ago he started his YouTube channel, which made him nothing for the first year. The climb to profitability was slow but steady — pennies a day, seven bucks a day. His wife asked him if he was sure he wanted to do it, considering the time commitment and lack of short-term payoff.

Now, with the YouTube ad dollars and modest sponsorships from fishing equipment companies, he estimates his daily revenue at about a hundred bucks before taxes.

"It took me two years to get to this point," Sheng says. "It wasn't easy." 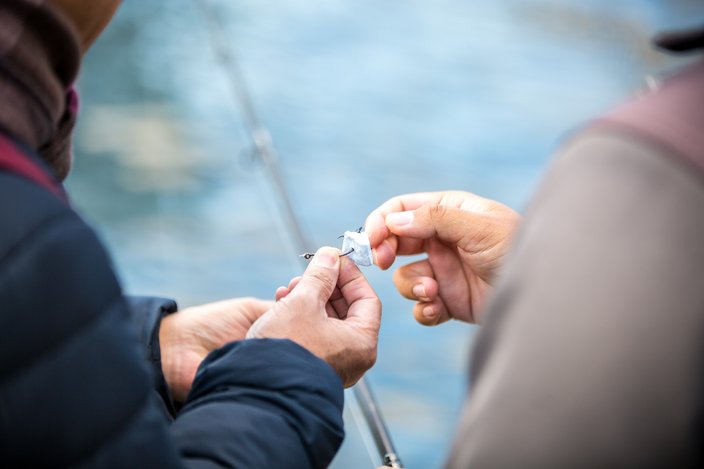 Leo Sheng shows a curious passerby the Irish Spring soap he uses while fishing for catfish on the banks of the Schuylkill River in Philadelphia. The high fat content in the cleanser draws the fish, he says.

To get there, he's trying to ride his gradual but stable rise in viewership, instead of opting for "clickbait" videos with headlines that amount to nothing than exaggerated fish stories. It's a tactic favored by some, but one that can produce wildly inconsistent numbers of views, according to Sheng.

Sheng's been slowly forming a reliable and interactive audience, one he engages with on Instagram by answering direct message questions about 70 times a day and through fishing equipment giveaways every Thursday. ("Oh, s***," he says while explaining the promotion. "That's today.")

Sheng stresses he loves tutoring kids, but his fishing channel provides him another way to be a positive influence on young people's lives. Many of those direct messages are from young fishermen and fisherwomen asking him to help identify species they've caught. The teacher in him doesn't give the answer away immediately; he guides them and helps them figure it out themselves. In an age of too much technology, Sheng says, he's glad to encourage kids to get outside.

"He sees you doing the stuff, and he goes to his parents and says, 'Hey, I want a fishing rod!'"

Of course, any online venture is sure to attract trolls. Sheng stresses that more than 90 percent of his interactions are positive, but being an Asian-American has exposed him to bigotry. Some of those interactions have made him laugh, such as being compared in appearance to North Korean dictator Kim Jong-un. Others have been "straight-forward ignorance."

"Some say, 'Go back to China,' which doesn't make any sense, because I'm from Brazil.'"

At the end of the day, Sheng notes, even the trolls are paying customers, especially in a business dependent on total views.

"I always say, the haters are your biggest fans, because they watch everything."