Data visualization shows sightings across the country in past century 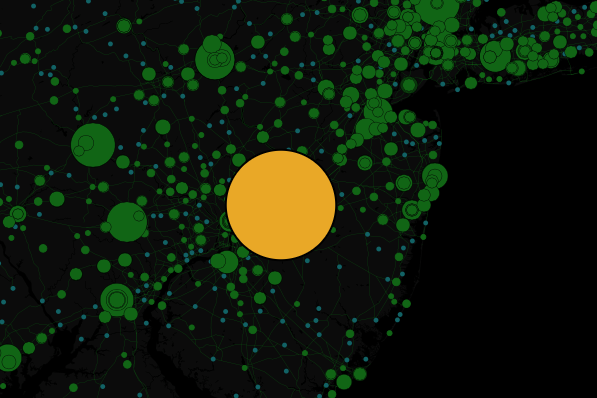 A new map from Metrocosm highlights 75 "credible" sightings of a UFO over Burlington, New Jersey in 2009.

When someone claims they've seen a UFO, it tends to capture our imagination.

Take, for example, a man who recorded what appears to be either some strange cloud-like mass or just a floating plastic bag at 7th and Tioga streets in Philadelphia. His video, posted in July, has more than 1.3 million views on Youtube.

Now, that was one video/"witness." Which is what makes the case of several witnesses who reported a 2009 sighting in Burlington, New Jersey, all the more fascinating.

Metrocosm, a data visualization website, used information from the National UFO Reporting Center and the Mutual UFO Network to compile more than 90,000 of what are considered credible sightings of UFOs since 1905. Then, they created an interactive map to show where the most sightings have occurred.

Of all the compiled sightings, a strange light spotted over Burlington, New Jersey, on September, 19, 2009, had the second most credible reports in their data with 75. Here are some of the witness accounts:

Extremely bright and radiating light outward. Object seem to not move but projecting light towards the direction in which it was observed. The sky was completely cloudless; however, the object/light seemed to disappear in a cloud but not move whatsoever.

Then my brother casually said “look there is a spaceship.” We both thought that it was a spaceship because it was moving up and was much bigger than any plane or helicopter we had seen flying by. It was circular in shape and what was really apparent was a large cone shaped light that it emitted downwards. The light was huge, roughly about ¼ of the horizon and formed the shape of an upside down ice cream cone/pyramid.

At first I thought it was the light of a plane shining through the clouds, but after the object disappeared we both noticed that there were no clouds in the sky at all. Right before it disappeared, the light flickered off and then came on again for a brief moment and then the object and light both instantaneously were gone. It was extremely startling how it disappeared because it was definitely not far enough away to make such an abrupt exit, as opposed to a plane fading in the distance.

Directly after this had transpired I took out my phone and took a picture of the empty night sky so that it would record what time this happened. It was at exactly 7:53.

During a conversation, 6 people were attracted toward the darkened, completely clear sky... stars were visible, no cloud cover at all during the day, or the evening.

A light which appeared in the southern sky, became brighter during the first 5-7 seconds shone down in a triangular pattern, and appeared to have a smoke screen/cloud surrounding it, which seemed odd because of the otherwise clear evening.

All six people were shocked and startled by the view, which could only be explained by it's close proximity, and altitude (and hovering) to be a helicopter, except it was completely quiet.

As soon as the light reached it brightest, and many of us were worried, it appeared to depart in an upward pattern (straight up and away); it took about 5-7 seconds to diminish and then disappear.

No one who witnessed this event (including one military vet, and current law enforcement officer) had ever seen anything like this before.

Now, here's the thing. Many of the witness accounts have a note attached from the National UFO Reporting Center that reads: NUFORC Note: Missile Launch.

An attempt to reach the National UFO Reporting Center for comment on whether this means that the light seen that night was in fact a missile was not immediately returned.

So, in the meantime, enjoy this incredibly cheesy news report about a separate sighting in New Jersey back in 2009.

Check out the full map from Metrocosm here.