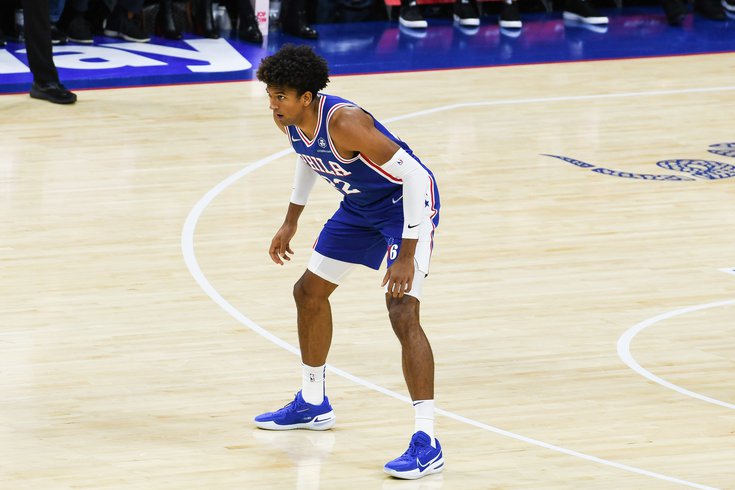 PHILADELPHIA, PA - OCTOBER 28: Matisse Thybulle #22 of the Philadelphia 76ers plays defense during the game against the Detroit Pistons on October 28, 2021 at Wells Fargo Center in Philadelphia. (Photo by Kate Frese/PhillyVoice)

The Sixers have avoided having to discuss vaccination issues for most of the last year, Philadelphia mandates never impacting the players who could suit up for the team. As the prospect of playing the Toronto Raptors in round one become realer, though, Matisse Thybulle's vaccination status became a hot-button issue over the last week.

And really, the scrutiny over the last week was just the first public thinking on the matter. Internally, the Sixers have discussed the matter with Thybulle, the organization aware of Canada's mandate for travelers and the increasing probability of playing the Raptors over the last month. Thybulle, as he explained to reporters on Sunday, appears unmoved by the fact that he will miss a minimum of two road games against Toronto. His reasons for not being fully vaccinated date back to his childhood, Thybulle said.

"I was raised in a holistic household, where anti-vax is not like a term that was ever used, it’s a weird term that has been kind of been thrown around to just label people," Thybulle said. "We grew up with Chinese medicine and naturopathic doctors. Just with that upbringing, coming into the situation, I felt like I had a solid foundation of medical resources that could serve me beyond what this vaccine could do for me. As things escalated, and as this situation has played out, I’ve obviously had to reconsider and look at it differently."

"To that point, it got to the point last year during the playoffs where I did actually consider getting vaccinated and went through with getting the first shot, the first dose, because at that point I was under the impression that getting vaccines would mean I could not get the disease and transmit it to other people. And I felt like if I’m going to be a part of society, in the position I’m in, I need to do what’s right for the greater good. That argument with the greater good held a lot of weight for me. And as things progressed, as this virus has changed many different ways, it showed through the science that wasn’t the case anymore, that even while being vaccinated you could still spread the disease."

With the Sixers (and their fans) staring down the prospect of being short an important rotation player for a series many expect to be tough to begin with, Thybulle says he has faced different responses from different people inside and outside the organization. But to this point, Thybulle maintains that his decision has been made and he's sticking to it.

"From fans to coaches to front office to teammates, there are people who are upset and people who don’t understand but ultimately I’ve been lucky enough to have the voice that they may disagree but they still support me in my decision making," Thybulle said. "And with that being said, I’m still going to be there and give 110 percent every time I’m available to be on the court.”

A refresher on the relevant vaccine policy here — the Canadian government requires people to be fully vaccinated to enter Canada as of January 15th. If Thybulle were to change his current course and decide to receive the vaccine, he would face a minimum of a two-week period before being eligible to play games in Toronto. The Canadian government considers someone fully vaccinated two weeks after the one-dose shot of the Johnson & Johnson vaccines, or two weeks clear of the second dose from the Pfizer or Moderna vaccines.

Theoretically, if Thybulle were to receive the J&J vaccine tomorrow, he would be cleared to enter Canada two weeks after that dose. A final-hour change, though, will not allow Thybulle to be available for the first road stint of the series, and any theoretical availability for a potential Game 6 would hinge on an ultra-favorable schedule. In all likelihood, the Sixers will be without Thybulle for the entire road slate against Toronto.

"One of the things my dad taught me growing up is you're free to do whatever you want as long as you're willing to accept the consequences of it," Thybulle said Sunday night. "And, like I said, I considered, deeply, all the different avenues, and of course, I've accepted that this could hurt money, contracts, reputation, but I felt like this was the right thing that I needed to do for myself."

The Raptors, who feature an army of forward-sized players to throw at the Sixers in droves, are a particularly tough team to be down a man against. With Thybulle their best (and perhaps only) athlete on the wing, missing him in this specific series will impact Philadelphia, forcing veteran Danny Green into a bigger role and sliding other guys up a spot or two in the rotation.

The only mystery left, a question we didn't get to during a brief interview session with Thybulle, is what could have moved Thybulle in the three weeks between when he got the first dose and when he ultimately decided he was not going to get a second. Even with the maximum benefit of the doubt under the "do your own research" umbrella, there's nothing within that period that would have served as meaningful, long-term data as it pertains to vaccine effectiveness one way or another.

"My reasoning for getting it [or] not getting it wasn't really the downsides," Thybulle said, "I just didn't feel like it would benefit me. I didn't see any benefits outweighing what I could seek from alternative medicine."

One potential benefit? Being able to play in all of the games his team is scheduled for in the first round.