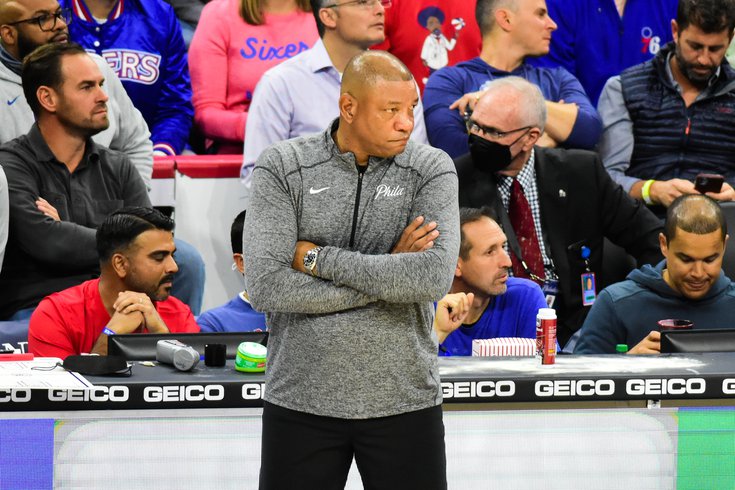 PHILADELPHIA, PA - OCTOBER 28: Head Coach Doc Rivers of the Philadelphia 76ers looks on during the game against the Detroit Pistons on October 28, 2021 at Wells Fargo Center in Philadelphia. (Photo by Kate Frese/PhillyVoice)

Doc Rivers' job status will be one of the hot topics of the offseason if the Sixers don't deliver in the playoffs this year, and the rumor mill is already getting out in front of that possibility. With Lakers head coach Frank Vogel expected to hit the exit after this season, Rivers' name has been floated as a potential candidate for the lead job for the L.A. job he hasn't had yet.

That's the word from Jake Fischer at Bleacher Report, who named current Jazz coach Quin Snyder (a one-time assistant for the Lakers, mind you) as another potential name in the mix for the gig. Here's what Fischer had to say on Rivers:

Doc Rivers, the Philadelphia 76ers’ head coach, is another active bench leader being mentioned by league personnel as a potential Lakers candidate. Rivers’ tenure in Philadelphia has also come into question of late, spurred by team president Daryl Morey’s deadline acquisition of James Harden and the mounting speculation that followed about a potential reunification with Harden’s former Rockets head coach Mike D’Antoni.

Rivers has also been linked by several league sources as a potential replacement for the Jazz, in the event Snyder does depart Utah. Rivers was the head coach in Boston from 2004 to 2013 under current Jazz CEO Danny Ainge. [Bleacher Report]

Undoubtedly, there will be a lot of Sixers fans who see that rumor and do at least a small fist pump at their desks. Following last season's round two collapse, Rivers' job performance has been under the microscope in Philadelphia, outside pressure heating up even further once Philadelphia acquired James Harden at the deadline. Smaller Rivers decisions, like his choices at backup center and the bench wing rotation, have been cited frequently as trouble spots that could do real damage to the Sixers once the playoffs roll around. Heck, they are doing damage to the Sixers ahead of the playoffs, with the DeAndre Jordan minutes a nightly adventure on the floor.

To date, the Sixers have pushed back on the idea that they are itching to move on from Rivers, especially when the notion of moving on from him has been tied to Morey replacing him with former Rockets coach Mike D'Antoni. Members of the organization have frequently cited several key factors, including Joel Embiid's career-best play under Rivers and their ability to win big games with shorthanded lineups, as points in the head coach's favor, noting they are happy to have Rivers leading the team. The team has also been thrilled with Tyrese Maxey's development over the last two seasons under the guidance of Rivers and his staff.

Those are the things that have to be said, of course, for a team that has made no secret of the fact that they'd like to contend for a title right here and now. Rivers has been around the league for a long time, and he's smart enough to know that he would serve as the easy fall guy for an early playoff defeat. With Embiid in MVP form and Morey delivering the big-name star he claimed he was after in Ben Simmons trade discussions, booting Rivers in the event of playoff disappointment is the simplest way to keep the rest of the power players as blameless as possible.

Fairly evaluating Rivers in the public sphere seems increasingly difficult to do, with the weight of past playoff failures overwhelmingly coloring analysis of his present-day coaching. For this writer, Rivers has not been as bad as his worst critics say nor as good as his biggest fans believe. Rivers is a solid coach who has overseen a positive shift in night-to-night professionalism that nonetheless looks outmatched when more creative, adaptive coaches throw curveballs at the Sixers. Do you credit Rivers for helping to keep the locker room together during a trying time for the team to start the year, or note his role in the Simmons situation falling apart to begin with? Tactical nuances, like Philadelphia's approach to defending opposing non-shooters, will be scrutinized on a different level when the playoffs start on April 16.

(There's also the question of whether Rivers would even want the Lakers job, regardless of whether he stays or goes in Philadelphia. In the final days of a nightmare season in Los Angeles, the Lakers have minimal flexibility and upside over the long-term, with any potential head coach needing to bet heavily on LeBron James turning in yet another elite season and Anthony Davis staying healthy enough to make an impact. It's the Lakers, and it will likely be a big-money contract, but it's not the greatest job in the world right now.)

If you want to give Rivers credit for anything, it's worth noting he has embraced the championship-level expectations in public despite knowing how that could ultimately fall back on him if things go south. No matter what ends up happening on the floor, everyone in the organization knows what's at stake in these playoffs. We'll see whether the choice to aim high ends up being a galvanizing force or the death blow for an organizational power player.