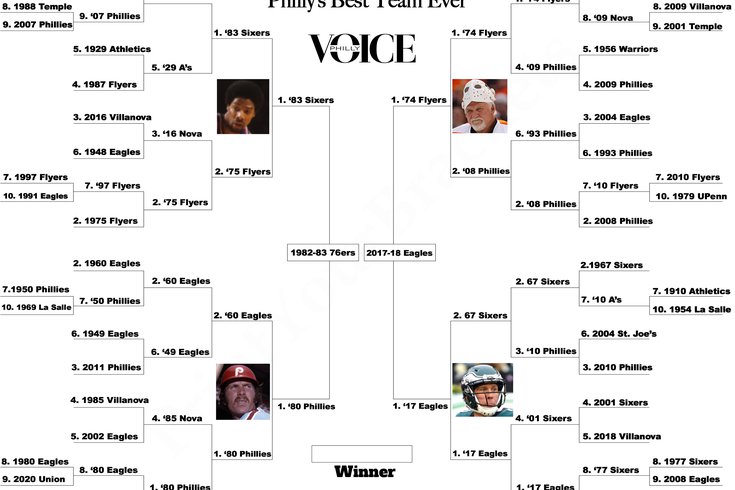 We started with 40 teams of varying success but all of which had a massive impact on the Philadelphia sports landscape. Our intention was to find the best team ever assembled representing this city.

Thanks to thousands of votes from readers like you, we are down to our final two:

The 2017 Eagles team that won the first Super Bowl in franchise history, and the 1982-83 Sixers who nearly swept their way through the playoffs, beating some of the best teams in NBA history.

Which team should hold the title of best team ever? We need your vote one last time...

Evan Macy: Sixers. I wasn't born for this Sixers team, but I was in the stadium for the Eagles Super Bowl victory. And I will always carry with me the joy from being a part of that season. However, the best team ever is the 1983 Sixers. I wrote about it two years ago when I ranked the best teams in city history. They won every game by 7.7 points and had five hall of famers on the roster. Here's how I broke it down:

The '83 Sixers had to contend with Larry Bird's Celtics and Sidney Moncrief's Bucks in the East and had a much better and more highly competitive NBA all around when they were able to win the title. They lost just once in the postseason and swept Magic Johnson and Kareem Abdul-Jabbar's Lakers in the Finals. If you look at the NBA champions from 1980 until 1988, it is the Lakers five times, the Celtics three times and the Sixers smushed in the middle. They were the one team in the prime of the Lakers-Celtics rivalry that could stand up and take a championship away from Magic and Bird.

Shamus Clancy: Eagles. Here's what I wrote last round. If anything, it gets more true by the day:

Nick Tricome: Sixers. Let me be perfectly clear: Both teams are absolutely legendary. The '17 Super Bowl run will probably stand as the greatest sports memory of my life. The Philly Special? I will argue to the end of time that it's the greatest play in Super Bowl history. But that '82-'83 Sixers squad is probably the most complete and dominant professional team the city has ever seen. They were absolutely stacked 1-5, dominated the regular season, and blazed right through everyone in the playoffs (even the Showtime Lakers in the Finals). By far they were basketball's best that season and one of the greatest in NBA history.