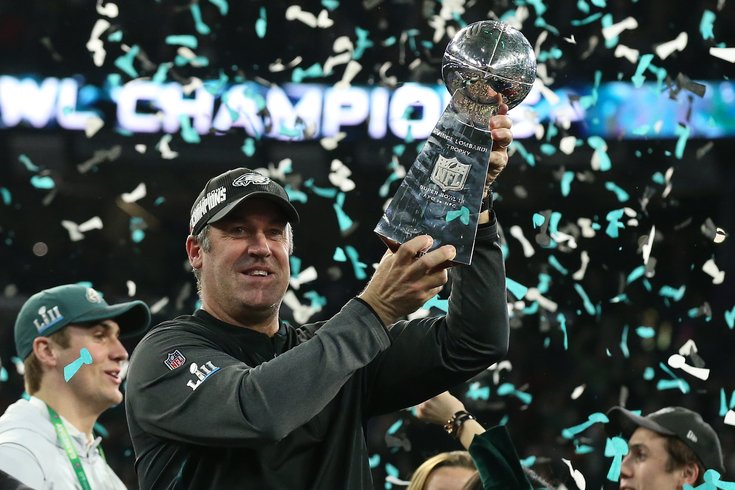 The following is just an exercise in ranking. There is no real, clear and flawless methodology for comparing different eras and completely different sports. But that doesn't mean we aren't going to try.

The city of Philadelphia has won 15 major sports championships in the five main pro sports in the last 120 years (in addition to some other smaller titles, like the Philadelphia Soul winning the AFL crown three times). Since we've been focused on pro sports throughout the rest of our PhillyRank series, we will acknowledge the awesomeness of the three Villanova titles, and other collegiate champions of the past — but they don't qualify for this list.

When trying to decide if, for example, the 1960 NFL Champion Eagles were better than the 2017 Super Bowl champs, we weighed a lot of different factors. Margin of victory was a helpful stat, as was their record during their season and the number of Hall of Famers or All-Stars (or Pro Bowlers) on the roster. We also were mindful of the level of competition and league expansion. When the 1967 Sixers won the title, there were 10 NBA teams, 3 of which had winning records. While that team is one of the best of all time, it does hurt that title's relative impressiveness when compared to, say, the 1983 team that played against 22 other teams (and swept Magic Johnson's Lakers).

We also, to narrow and simplify the list, picked just one team from each era (so one 1970s Flyers squad, one 1910s Athletics team and so on).

We welcome your disagreement, but want to emphasize that this was tough, and all of these teams hold a special place in our hearts in Philadelphia.

So without further ado, here's a look at the best championship teams in the history of Philadelphia:

Two of the greatest Phillies of all-time (Carlton and Schmidt) anchored this team, with a past-his-prime Pete Rose also helping as a key contributor. Other household names like Larry Bowa, Tug McGraw and Greg Luzinski were everyday players for a team that was endearingly called the "Cardiac Kids" for their penchant for playing in close games. The Words Series victory over the Royals was special, to be sure, but their five-game series win against the Astros in the NLCS, a series that saw four games go to extra innings was the stuff of legend. Obviously, their margin of victory is small, and the supporting cast after the team's superstars is lacking, making them No. 10 on our list.

This is one of two major sports championships most readers of this piece will have their own memories of, as the Phils ended a 25-year cold streak when they beat the Rays in five games 12 years ago. Cole Hamels was the anchor all playoffs long as a really dominant effort saw the Phillies lose just one time in each of their three series victories. Interestingly, Chase Utley was the NL's leading vote getter ahead of the 2008 All-Star Game, a contest that saw Brad Lidge blow the only save he'd blow all year. It's sad to think about how much talent this team had, and that they were unable to close the deal with arguably better rosters in 2009, 2010 and 2011.

The Hall of Famers from this team are household names in Philly. Why? Well, before 2017, this was the most recent championship squad to play football in the city. This team was the lone defeat for Vince Lombardi's Packers' dynasty, as they would welcome the Super Bowl era with wins in the first two NFL-AFL championship games amid five championships total. Bednarik played every single snap on both sides of the ball as the Eagles — in front of more than 67,000 fans at Franklin Field — pulled ahead late in the fourth and held on to win despite being out-gained and very possibly outplayed in the game. The Eagles had just nine completed passes and their longest run was just eight yards. They also lost the turnover battle. It was a great team, but the win was a true upset and an ugly one at that.

This Eagles team won back-to-back titles in 1948 and 49, but the 49 team was a bit more impressive with two more wins on the ledger and a larger margin of victory. They somehow had the first pick in the NFL Draft that offseason — a pick called a "bonus pick" despite their being the defending champions. They selected Bednarik. The rookie would help the Birds on both sides of the ball as they lost just once during the regular season and shutout the Rams in the championship game. The defense was beyond dominant, holding L.A. to just 21 rushing yards. Van Buren went wild, running for 196 yards on 31 carries for Philly.

This was the first of five Philadelphia championships under Connie Mack for the A's. The current version of the club won three titles in four years, also winning World Series' in 1911 and in 1913. This team, which was the winningest of the three, and also saw them win the American League by 14.5 games, the most in that category as well. Old timey pitching stats (and names) are just awesome, so we'll leave you with the 1910 Athletics' rotation:

This and the other A's team on our list (from 1929) have a major major knock against them: they played in a league that segregated players based on race. One can only imagine what baseball would have looked like before 1947 if all the best players were on the same teams, but we can only judge history based on what we have to work with, and in its era, the Athletics were one of the most dominant franchises for three decades.

We don't want to fall victim of recency bias with this one, but the Eagles march to their first Super Bowl was a season-long memory many will never forget. The Birds first won the NFC East thanks to an MVP-like season from Wentz before an injury handed the reigns to backup Nick Foles. Foles handled the Falcons and the Vikings and then bested Tom Brady in a shootout in what would surely be No. 1 on our list of best championship-clinching games in the city. There may not be as many future Hall of Famers on this team as others we are recognizing here, but there was a ton of depth, enough to overcome injuries not only to Wentz but also to Jason Peters, Darren Sproles, Jordan Hicks and many others to earn the Lombardy trophy.

The first of the Flyers' back-to-back Stanley Cup wins is the fourth best title-winner on our list, as the Broad Street Bullies remain one of the most legendary squads in the city's history. After sweeping the Flames, Philly went down to the wire against the Rangers, winning in seven games before besting the Bruins in six. Though just three players from the team that won (both) titles made the NHL Hall of Fame, the 1973-74 team had four All-Stars and also included the Adams award winner (Shero), Pearson award winner (Clarke), the Vezina winner (Parent) and three All-Pros (Clarke, Parent and Barry Asbee). Parent's 47 regular season wins that was an NHL record until 2006. The 1974-75 team defended their title in similar fashion with a first round sweep, a second-round seven-game win over New York and then six-game Cup finals victory. Parent won the Conn Smyth award in 1975 as well.

The Athletics left the city of Philadelphia in the 1950s, but the team that won back-to-back titles in 1929 and 1930 was arguably one of the greatest of all time. The 1927 Yankees that included Lou Gehrig and Babe Ruth are often cited as the best ever, but the AL was dominated by the two teams who were pretty equal during the era.

"According to most old-timers who played in that era, the 1927 and '28 Yankees and the 1929 and '30 Athletics matched up so closely that they were nearly equal, with the A's given the nod in fielding and pitching and the Yankees in hitting... [Sports Illustrated, 1996]

This team and the 1967 one always fight it out for the title of best Sixers team ever. There is a good case to make for the '67 team. They were more dominant and boasted one of the three or four best basketball players ever to play the game in Wilt Chamberlain and they broke up the most dominant dynasty in the history of the sport. But the competition in 1983 was much also fierce. The two teams are very close and we went back and forth before deciding that the '67 team by a hair, gets the No. 1 spot:

The '83 Sixers had to contend with Larry Bird's Celtics and Sidney Moncrief's Bucks in the East and had a much better and more highly competitive NBA all around when they were able to win the title. They lost just once in the postseason and swept Magic Johnson and Kareem Abdul-Jabbar's Lakers in the Finals. If you look at the NBA champions from 1980 until 1988, it is the Lakers five times, the Celtics three times and the Sixers smushed in the middle. They were the one team in the prime of the Lakers-Celtics rivalry that could stand up and take a championship away from Magic and Bird.

Regarded as one of the best teams in NBA history, the 1966-67 Sixers were led by Chamberlain — who nearly averaged a triple-double and was third in the NBA in assists. He also averaged 24.1 rebounds per game as he took his second of three consecutive league MVPs, his third of four total. Clearly it was the best team Wilt the Stilt ever played for, with six players (including Chamberlain, obviously) scoring in double figures that season. The Sixers had 24 more regular-season wins than the Rick Barry-led Warriors, who they beat in six games in the NBA Finals. They also beat Oscar Robertson's Royals and Bill Russell's Celtics to take the crown. They are the only team other than the Celtics to win a title in the 1960s. This team could get knocked to second due to the fact that there were just 10 teams in the entire league back then — but that the NBA's talent was more concentrated and the fact that this team is routinely named among the greatest ever in NBA history earns it our top slot..