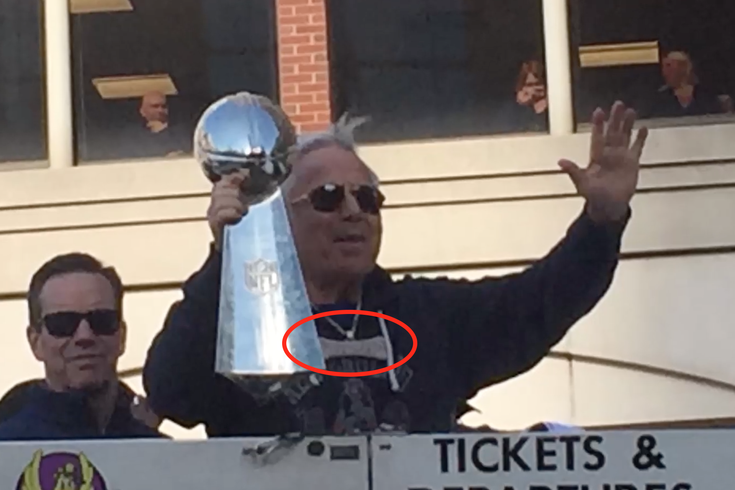 In the aftermath of the worst Super Bowl ever, Patriots owner Robert Kraft has been celebrating his franchise’s sixth title with a very ostentatious piece of jewelry.

Unfortunately, the chain — which reads “Championships” on one side and “Dream Chasers” on the opposite side — is, indeed, a gift from Kraft’s friend and Philadelphia rapper Meek Mill, according to an interview Kraft gave at the team's Super Bowl parade on Tuesday:

Robert Kraft says #SuperBowI in Atlanta was 'like a home game,' talks about 'Championships' necklace he got from Meek Mill https://t.co/EOeRhHeM0S #7News pic.twitter.com/gIdN4VhgwS

This disheartening bit of news comes just a few days after the Patriots used Mill’s “Wins and Losses” in a hype video before the big game.

We weren’t sure at the time if Mill had given the team his go-ahead to use the song, but it feels safe to say now that he green-lit the use.

It’s a bit of a bummer for Eagles fans that Mill has apparently struck up a lasting friendship with Kraft, the head honcho of a team most people love to hate — for a variety of reasons.

But it’s at least mildly understandable. Kraft called attention to Mill’s situation when the rapper was in prison, and even visited Mill during his prison stint.

Kraft is also one of the more notable members of Mill’s new criminal justice reform organization, The Reform Alliance, which will lobby for changes to states’ probation and parole laws across the U.S.

Interestingly enough, Mill tweeted over the weekend in what seems like a reference to criticism for supporting Kraft:

Don’t address me about no Super Bowl shit I really been beat by police in real life I know wtf I’m doing and what I represent!

Still, this stings coming from the same guy who was rushed in to ring the bell at a Sixers playoff game last spring, and might be up for another bell-ringing stint when the Sixers make their second straight postseason push this year.

In the end, you can't win over everyone.