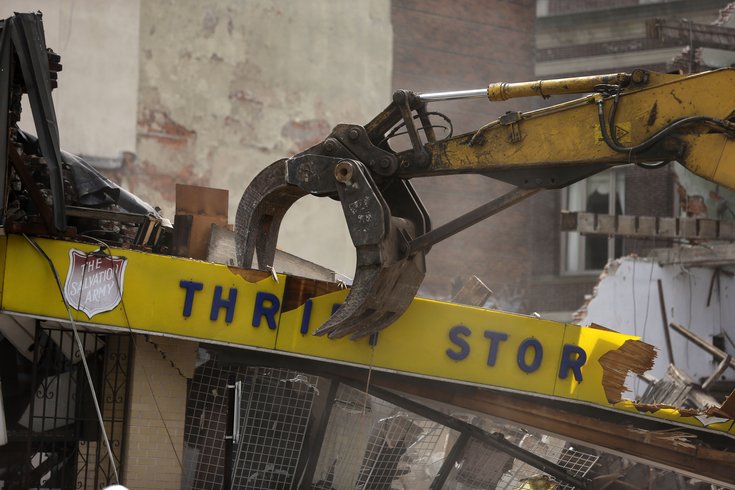 To commemorate the second anniversary of the Market Street building collapse that killed six and injured 14, the family of victims gathered Friday near the site of the tragedy with Mayor Michael Nutter, who spoke in remembrance of the dead and addressed plans to construct a permanent memorial.

Nutter also announced progress toward funding the memorial. He said the city will put an additional $300,000 toward the project, which brings the total raised to just under $1 million. The memorial is expected to cost about $1.3 million.

“This memorial needs to happen,” Nutter said adding that he believed the gap in funding could be closed quickly. Two years ago, a nearby building being demolished onto the Salvation Army thrift store next door,  killing or injuring the occupants.

Nutter spoke in front of a large artist’s rendering of what the memorial will look like. Recently approved plans call for the memorial to center around three slabs of black granite, which will hold colored windows symbolizing each of the victims. The victims' families picked out the color of the window that will represent their loved one.

“We unfortunately know all too well what happened on that day, June 5, 2013. For many of us it becomes one of those moments that really seared in our minds,” Nutter said. “We remember exactly where we were or what we were doing at that time.”

At the end of the ceremony, Nutter presented replicas of the colored windows to the victims' families. 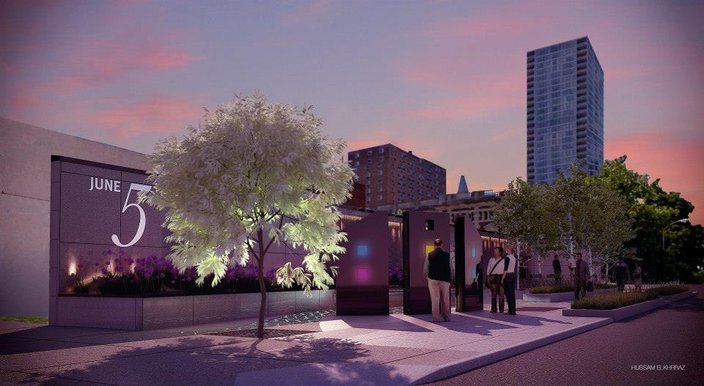 A rendering of how the memorial will look once it is finished. (Contributed Art/June 5th Memorial Park Facebook Page)

Nancy Winkler, the mother of victim Anne Bryan, who was a 24-year-old art student at the time of the collapse, co-chaired the memorial committee. She spoke before the mayor and said that she took a bike ride with her daughter the morning before the tragedy.

“Anne was smart, she was fun, she was devoted to our family,” Winkler said. “She had a quick wit and was a deep thinker.”

She said one of her daughter’s goals was to sing the national anthem at a Phillies game.

Winkler pushed her way through an emotional address under lightly sprinkling rain, mild temperatures and gray skies. The memorial will be centered near the Market Street side of the property where most of the victims were found.

The ceremony lasted about an hour. A local school jazz band played the national anthem. Attendees observed a moment of silence.

Nutter vowed that the city would learn from a tragedy many blame on a reckless demolition.

“Safety first must always be our number one goal,” Nutter said adding that in the wake of the tragedy, the Department of Licenses and Inspections received new funding for more inspectors.

Donations to the memorial fund can be made here.