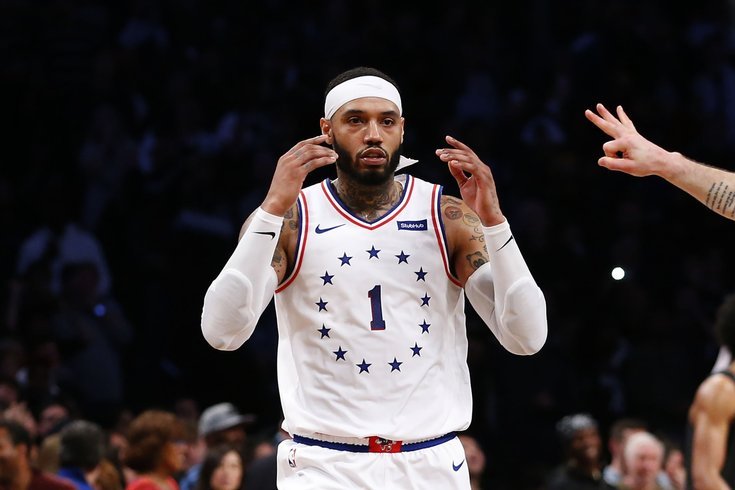 Philadelphia 76ers forward Mike Scott won't be able to wear his red and white headbands on the court during the 2019-2020 season. The NBA deemed the popular look "unprofessional" and announced they will be banned for the upcoming year.

While details continue to emerge in Sunday's unfortunate altercation between Sixers forward Mike Scott and Eagles tailgaters, another piece of bad news officially came down from the NBA on Monday.

Going forward, Scott and other NBA players will no longer be permitted to don the "ninja-style headwear" that became popular around the league last year, according to ESPN's Adrian Wojnarowski.

Scott and others caught wind of the impending ban over the weekend. The headbands were seen as "unprofessional," Scott was told.

According to @mikescott, @Nike and @NBA have banned the ninja-style tied headbands that became so popular last year. According to Scott, Nike said they appeared “unprofessional”. 🏀 Bad move IMO, as players and fans loved this new style #NBA pic.twitter.com/PCJic2n446

NBA spokesman Mike Bass told ESPN that the league never had a formal process surrounding the headgear, which was worn by a handful of players including Jimmy Butler, Jrue Holiday, Karl Anthony-Towns and Montrezl Harrell.

"The ninja-style headwear is not part of the NBA uniform and hasn't been through the league approval process," Bass said in a statement. "Teams have raised concerns regarding safety and consistency of size, length and how they are tied which requires a thorough review before consideration of any rule change."

NBA teams were notified in May that the headwear would no longer be allowed for the 2019-20 season. The league held off from enforcing the ban during the playoffs in order to avoid a disruption.

Scott's brand has been synonymous with the red and white headbands. Fans who have gotten the Mike Scott Hive tattoo even include the headband on the letter O or around the head of the bumble bee.

You’ve likely heard the Tattoo Story by now, but now hear it from the man himself. @mdelNBA tells the tale of how he went from being a random #Sixers fan on Twitter, to making a lifelong commitment to the Mike Scott Hive. https://t.co/E1Hci9PYps pic.twitter.com/EWfgDXuUPw

The sentiment around the league and among fans is that the decision seems unwarranted.

i love that someone at the nba had to type the words “ninja-style hardware” and “consistency of size and length” as their job today https://t.co/n70otsakt1

Give us a valid reason why it’s a safety concern. If not, this no ninja headband rule by the NBA is Goodell-esque nonsense.

When you find out the NBA is banning those ninja style headbands pic.twitter.com/7NjzCP4FcL

@Nike claims the ninja headband is too "unprofessional" for NBA players but here's Rafael Nadal wearing one on the tennis court a sport where how professional you look can literally keep you from participating.

I wonder what makes him different from the NBA players...🤔🤔🤔 pic.twitter.com/A3hysvKC8g

Even LeBron James was wearing one of these headbands during a recent workout.

The King is getting ready for season 17 👀🔥
(Via @swishcultures_)
pic.twitter.com/i1RTso4iTz

It's merely coincidental that Scott's ninja powers have been revoked the day after he found himself in a fight outside Lincoln Financial Field. A lifelong fan of the Washington Redskins, Scott was antagonized for wearing the jersey of his favorite team to a football game. It's not Philly's finest moment, but it's also an aberration. That's always important to remember.

Thus far, it appears the Sixers won't take any disciplinary action towards Scott. We can move on to the question of whether he'll be able to drain corner threes without his preferred headgear.