Milton Street meets with Trump, invites him to attend rally with black community in Philadelphia 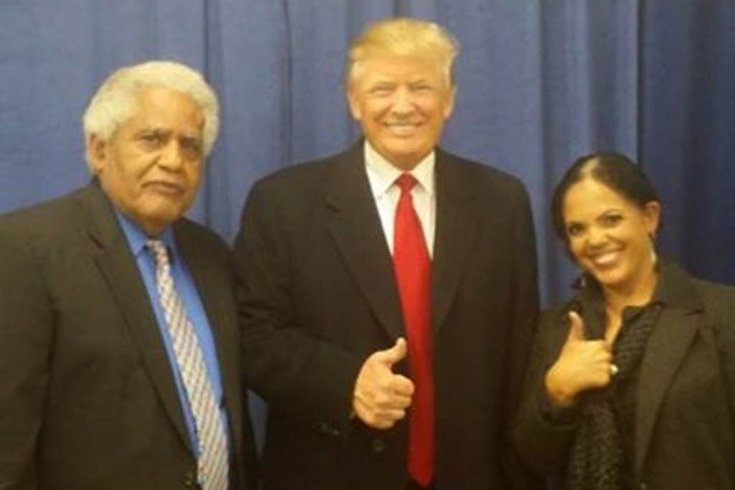 Milton Street with Donald Trump during a meeting in Virginia on Wednesday night. Renee Toppin is pictured at right.

Also, Bloomberg Politics reporter Sahlil Kapur tweeted Wednesday night that Trump said he may give a speech on black-on-black crime, something Street told PhillyVoice he planned on discussing with the candidate:

Trump says he might give a speech about black on black crime (per @margarettalev). What could go wrong?

On the eve of his oft-rescheduled pornographic press conference outside the Philadelphia District Attorney’s Office, T. Milton Street Sr. called PhillyVoice from the road with some big news on Wednesday afternoon.

Namely, the rabblerousing former state legislature who flipped from Democrat to Republican in the go-go Harrisburg Eighties and then returned to the Dem fold in pursuit of local office, said he was heading out of town for a big moment.

“I’m on my way to Virginia to meet Donald Trump,” he said.

Calling from Fairfax, Va., late this afternoon, Street confirmed that he has an invitation to meet with Trump privately after a rally Wednesday night in Manassas, Va. Street said he planned to use the occasion to invite Trump to attend a scheduled rally with the black community in Philadelphia.

Turns out that the man who has proven to be an unrelenting critic of DA Seth Williams’ not firing three subordinates caught up in a swirl of racist, sexist, pornographic-email allegations is gonna meet the man who infuriates much of America on a nearly regular basis.

Per Milton Street, he’s seeking financial support for the “414 Community Movement” for which he’s been pushing since announcing his 2015 mayoral run in 2014.

He said that the movement is an effort to combat crime in distraught Philadelphia neighborhoods, among other things.

He hoped to enlist "20,000 people, maybe more" into the "414 Community Movement" through a series of community meetings. Any costs accrued through this mission, he said, would be offset by its ability to keep people out of prison.

Trump, as you may already know, is in the midst of a controversy regarding a meeting with black ministers that was initially branded as an endorsement until the alleged endorsers say, “Yeah, no, that’s not what this is.”

Street doesn’t pay that much mind, though. No. He sees a chance to make a statement.

“Black people need to understand that politics is about the issues that affect their lives,” he said. “It’s not about Republican or Democrat. It’s about what candidate is going to address the issues that face their communities.”