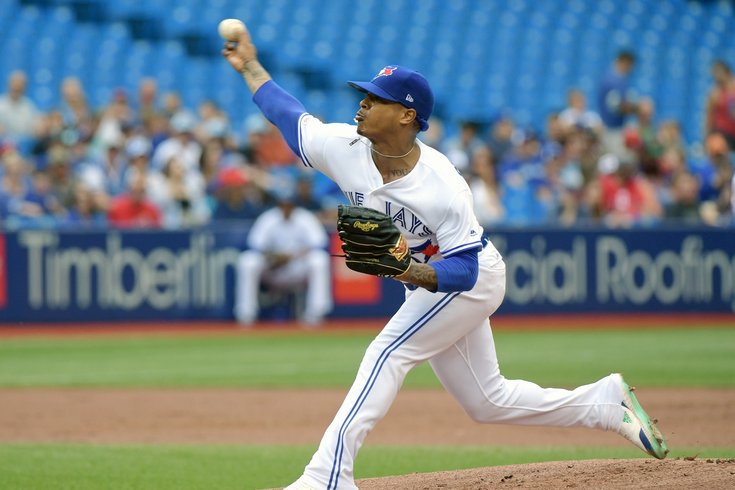 Toronto's Marcus Stroman appears to be generating a fair amount of interest from contending teams.

Jason Vargas has been traded to the Philadelphia Phillies, a source tells ESPN.

UPDATE [5:09 p.m.] — In return, the Phillies will reportedly be sending the Mets Double-A catcher Austin Bossart.

Mets get double a catcher for Vargas

On Sunday night the Mets, yes, the 50-55 fourth-place Mets, decided to be buyers as they traded two prospects with the Blue Jays for a potential Phillies starting pitching target, Marcus Stroman.

Stroman is 28 and has a year of arbitration ahead of him. He's pitched well, but not stupendously during his career. He is now in New York, where they are six games out of the Wild Card and 11.5 behind the Braves in the division. If this seems odd to you, that's because it is extremely odd.

The theory here seems to be that the Mets, who are looking to trade away starting pitchers Noah Syndergaard and/or Zach Wheeler have strengthened their hand as sellers by getting rid of a starting pitching option.

Pretty creative move by the #Mets. As a prospective seller, by acquiring Stroman, they changed the supply side of the equation without changing the demand side. This makes their starters (Syndergaard and Wheeler) more valuable in trade discussions with teams in need of starters.

Some Mets information, per sources. The plan is to hold on to Marcus Stroman, not flip him. They are increasingly unlikely to sign Zack Wheeler to a contract extension. The likelihood is strong they deal at least one of Wheeler and Noah Syndergaard. They’ve hijacked the market.

They have also set a market price — though neither of the two prospects sent to Toronto are top 100 prospects.

Jayson Stark wrote for The Athletic Sunday that "nobody can confuse an entire industry like the Mets.” Another Athletic baseball writer, Tim Britton, said the following:

"If this is indeed the precursor to a Noah Syndergaard trade, New York is replacing him in 2020 with someone older, with less team control, and whose track record is not quite as good. Stroman is also a pitcher who will not be served well by the Mets’ porous defense. Stroman keeps the ball in the park and on the ground, but New York’s infield defense entered Sunday ranked as the fourth-worst in baseball this season, according to Baseball Info Solutions’ defensive runs saved." [The Athletic]

It makes little sense — but that's never stopped the Amazin' Mets before.

All of this strangeness comes with two days remaining until the MLB trade deadline. The Phillies have been scouting and discussing several starting pitchers, according to reports, including Zach Greinke, Matt Boyd, and now Madison Bumgarner (who will be in town with the Giants starting Tuesday).

Among others, the #Yankees, #Cubs, #Phillies, #Braves have scouts in the house at Petco Park today as Madison Bumgarner starts for #SFGiants against @Padres

There's really no telling what will happen next. All we can say, and recommend, is you keep track of all the rumors, analysis and actual trades with our live stream/open thread below: