A young MLK Jr. spent a few formative years in the Philly area 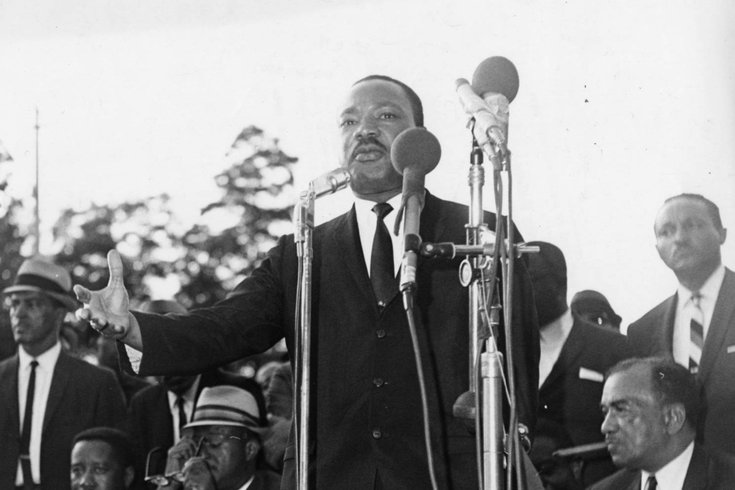 Dr. Martin Luther King Jr. addresses civil rights demonstrators at Girard College. Years earlier, he had many formative experiences while studying at a now-defunct seminary in Chester and engaged in an early act of civil disobedience in Maple Shade.

Martin Luther King Jr. may be most closely associated with southern cities like Atlanta or Birmingham, Alabama, but as a young man he spent a few formative years in the Philly area as well.

King was just 19 when he graduated from Morehouse College, a historically black institution in his native Atlanta, in 1948. He knew he wanted to be a minister like his father, which is what led him to enroll at the now-defunct Crozer Theological Seminary near Chester.

King was drawn to the school because of its liberal leanings, but was still just one of 11 Black students on the campus when he arrived.

Because of this, King was initially very uncomfortable and self-conscious at Crozer. He recalled being "grimly serious" in his first semesters there and got B's and C's in the first roster of courses he took.

But King eventually got more comfortable and formed strong relationships with his peers and professors. By the time he graduated in 1951, he was getting mostly A's and was granted the title of valedictorian. After graduating, he moved to Massachusetts to pursue another degree at Boston University.

King's time at Crozer strengthened his commitment to the social gospel, the concept of addressing societal ills through preaching. It's also when he was first introduced to the idea of pacifism and began developing his beliefs about effecting social change through nonviolent activism.

He first learned about pacifism from influential Dutch-American theologian and activist Abraham Johannes Muste, who would years later assist King with his Alabama bus boycott, but wasn't a fan until he learned about Indian reformer Mahatma Gandhi and the political change he was able to effect through non-violent means.

Crozer closed in 1970 when it merged with the Colgate Rochester Crozer Divinity School, which still exists in Upstate New York. Today the former campus is now part of the Crozer-Chester Medical Center.

While studying in Pennsylvania, King also spent some time on the other side of the Delaware River in Camden. He would often visit friends in the now vacant building at 753 Walnut St. in Bergen Square, which is where he embarked on one of his earliest acts of civil disobedience.

A 20-year-old King got out of church in Camden on Sunday, June 11, 1950 and decided he wanted to have lunch at Mary's Cafe, a restaurant in Maple Shade notorious for refusing service to African Americans.

King, a friend and their two dates drove off to Maple Shade where they were denied service at Mary's but refused to leave. The incident culminated with the bartender firing a gun into the air to scare the group off.

A police report was filed which lists 753 Walnut St. as King's address. The bartender ended up being convicted on gun charges and was briefly jailed.

Although Mary's, which once stood on the corner of Rt. 73 and Main Street, was torn down decades ago, the house at 753 Walnut St. is still standing.

It's been vacant for years and is in very rough shape. Back in 2015, Camden was planning to raze the building but stopped when a local activist named Patrick Duff who had uncovered the story about King's filed a petition with the state to get the building protected as a historic landmark.

In 2016, a number of activists and politicians including U.S. Rep. Donald Norcross and the late U.S. Rep. John Lewis gathered in front of the building for an event and committed to preserving the structure.

Despite this, applications to have the building added to the New Jersey Register of Historic Places have repeatedly been denied by the state Department of Environmental Protection’s Historic Preservation Office, which hired a team of Stockton University historians to investigate the row home's history.

Although there's no doubt King visited Walnut Street, the state says there's no evidence the house was ever considered his home address.

In June 2021, the home was bought by Camden-based charity called New Beginnings for $10,000 according to TAPinto. Amir Khan, who runs the charity, hopes to turn it into a museum. Late last year he was still pursuing having the building added to a historical register so he can get funding for the renovations needed.