The speculative exercise is done - now what? 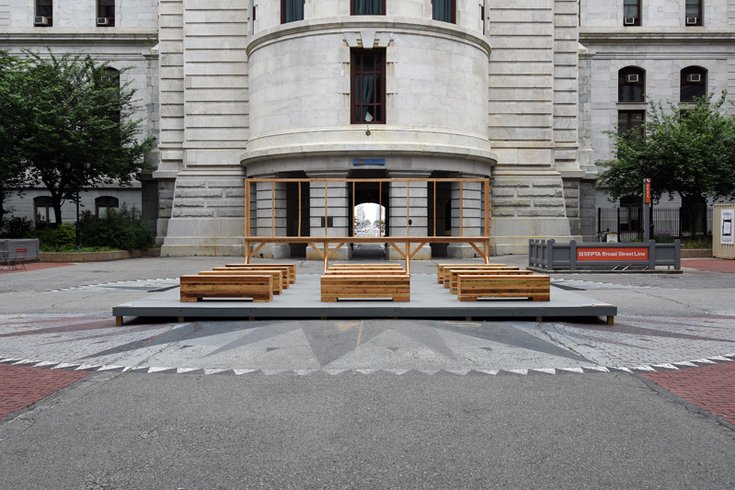 For a few weeks this spring, City Hall found its courtyard filled with an unusual type of life. It wasn't the commuters taking a shortcut through the landmark or curious tourists gazing up at its architecture. A new attraction had cropped up in the Center Square, making Philadelphians and visitors, artists and government workers engage with the city a little differently. In other words, it did its job.

The structure found there Friday, May 15, through Sunday, June 7, was a prototype monument by the late artist Terry Adkins, placed there as part of Monument Lab. The citywide experiment is a joint venture by curators, artists, city planning institutions, arts organizations and more, created as a "speculative exercise" to answer one question: What is an appropriate monument for the current city of Philadelphia?

Now, Monument Lab is not deciding on a new monument for Philadelphia, or even deciding what one such structure would memorialize. Rather, the program sets out to use the idea of a monument - what it means, what it looks like in the modern age, what it should do - to discuss the state of Philadelphia and its possible revival.

For 24 days while Adkins' sculpture rested in Center Square, the program's curators, local artists and civic-minded intellectuals would gather for a conversation with the public. They'd chat over lunch about Monument Lab's central question and would discuss Philadelphia's history and its current events, both its triumphs and its struggles. The program also hosted "Creative Speculator Proposals" (or imagined answers to the looming question) by respected artists Zoe Strauss, Kara Crombie, WE THE WEEDS and Alexander Rosenberg. The artists let their imaginations run wild, proposing site-specific installations for Rittenhouse, Logan, Franklin and Washington squares. 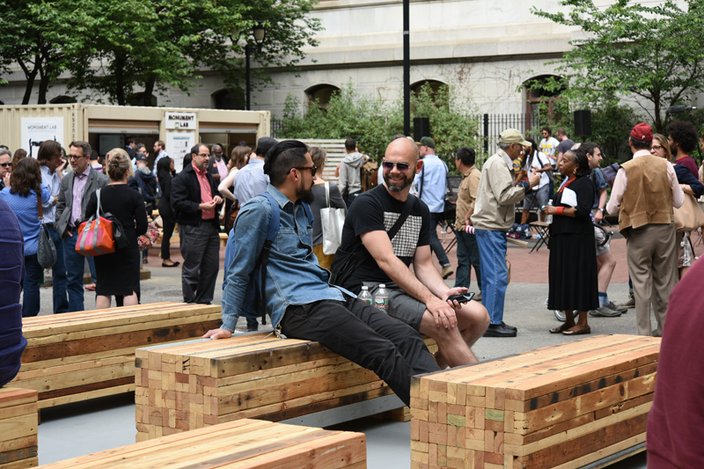 Those who didn't participate in Monument Lab may feel the program's ephemerality negates its usefulness. Sure, it was a cool way to spend your lunch hour and the conversations seemed fun, but what did it do?

For starters, Adkins' sculpture immediately activated the usually empty Center Square space. Before it was even fully installed, passersby wondered what construction was impeding their route. When it opened, children played on it, strangers sat on it and protesters demonstrated on it. But while people interacted with the prototype monument differently, they simultaneously interacted with what it represented: the history of ups and downs in Philly's education system.

"I saw [Center Square] come alive in ways that I had never seen. Just the simple act of putting a sculpture of a classroom that noted or marked the history of innovation as well as recent loss when it comes to education, there were a number of people who really connected with the content. They sat out there and they thought through what it meant to have a need for innovation in the lives of public education in the city," Paul Farber, one of Monument Lab's three curators, said.

The tension between things like the region's education system and its exciting development boom made Farber and his co-curators Ken Lum and A. Will Brown feel like Philadelphia was really a tale of two cities. For instance, while Philly's profile as a tourist destination rises, socioeconomic inequality persists. When they began Monument Lab two years ago, they sought to wrestle with these issues.

"What we wanted to do was think about the way that history affects the evolution of the city and utilize conversation led by artists, but also that included civic thinkers and the public of Philadelphia, to act ourselves together and think together about the state of the city," Farber said.

Though Monument Lab's installation and afternoon discussions are over, the work for Farber, Lum and Brown has just begun. Throughout the program they collected monument proposals from the public and gleaned even more from conversations. The team is now tasked with taking the wealth of information it received - personal stories, neighborhood points of view and creative ideas - and making use of it. Everyone's opinions and ideas, from each participant ages 3 to 69, will be valued equally in the process. 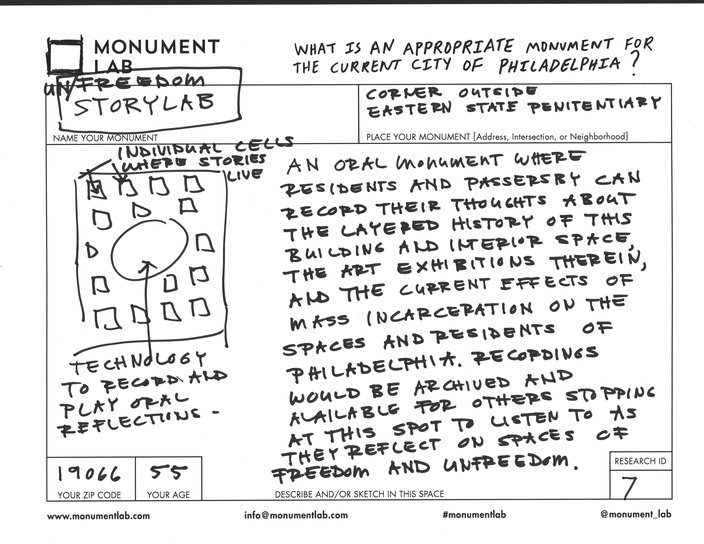 Though Monument Lab asked Philly citizens to think about what a modern monument might look like and encouraged them to engage with history, Farber found that they were certainly already thinking about it.

"What’s very clear to me is that Philadelphians, in this city full of existing iconic pieces as well as innovative approaches, already have a 21st century outlook. They see projects that comment on and critically engage with our current moment; they already do the work of memory in ways that are urgent and also creative," he said.

Monument Lab has already begun visualizing the data it gathered in maps, charts, word clusters and photos, all available online. When the team has analyzed it and presented its findings back to the city, it will all be available on OpenDataPhilly, where the public can make use of it. Beyond that, the curators hope to continue bridging the gap between public art and history, perhaps with future exhibits and installations.