America's 'oldest bookstore' set to be managed by Barnes & Noble

Moravian Book Shop opened in 1745 on Main Street in Bethlehem 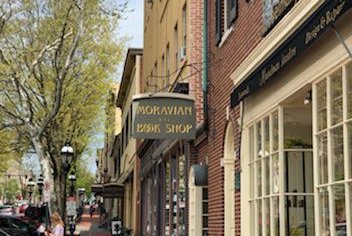 America's oldest book shop will soon be run by America's most familiar bookstore, one known to the outside promenades of malls and giant college campuses across the country.

Moravian Book Shop in historic downtown Bethlehem, Pennsylvania, recently was acquired by Moravian College. Moravian Church Northern Province, the previous owner, sold the shop so it could focus on its congregation.

This isn't a simple transition of owners. Moravian College plans to let Barnes & Noble, which has bookstores on a whopping 782 campuses across the country, take over operations of the shop, making it Moravian's primary bookstore for students. The swap is expected to take place in June. Two businesses housed within the store will close and, naturally, there will now be more Moravian gear in a shop known mostly for its books, crafts, toys, gifts and Star-themed merchandise.

Per The Morning Call:

Colony Meadery and Bone Appetit, the brewery and pet food operations in the shop, will be discontinued on the property, [Moravian spokesman Michael Corr] said, and the college will work with Barnes & Noble and the Sodexo food business to decide what will go in those spaces.

Founded in 1745 and located on Bethlehem's Main Street strip, which is filled with other quaint, independent boutiques, there is concern that flipping the store over to the college and letting Barnes & Noble run will mean sacrificing its unique character. For anyone who's strolled down Main Street (sans the annual teenager invasion during Musikfest), it certainly feels like an odd fit for a Barnes & Noble.

Rick Santee, president of the shop's volunteer-appointed board, told LehighValleyLive that Moravian understands the historical value of the shop, adding that this was the most viable way to make sure the business is financially stable. Moravian spokesperson Michael Corr told the website that the college is taking inspiration from William & Mary's bookstore in Virginia, which is also run by Barnes & Noble.

(Author's note: I've been to the William & Mary bookstore. The exterior is tasteful and certainly doesn't have the feel of a strip-mall chain. On the inside, it still looks like a cookie-cutter college Barnes & Noble.)

Moravian has been coy about what will happen to the current staff, but shop supervisor Leo Atkinson wrote in a Change.org petition that current employees have been told they will have to interview for jobs at the revamped store.

The petition, addressed to Moravian President Bryon L. Grigsby, has received more than 6,000 signatures, close to its goal of 7,000. The petition argues that the Bethlehem shop is in a "good position" with its core business, blaming any financial woes on the shop's board and its decision to open another location in nearby Allentown three years ago.

Atkinson — whose LinkedIn profile says he worked at a Virginia Barnes & Noble for about half a year — wants Moravian to give him and the current staff a shot at running store. Per the petition:

I think there are other avenues worth exploring, but if the sale from the Moravian Church to Moravian college is inevitable, the college has a choice as to who will operate the bookstore, including giving the current management a chance to show what we are capable of. I ask you to please tell the college that local small businesses are important for the health of our historic downtown and the entire city.

In response to the petition, Corr said the shop won't be a Barnes & Noble store, the shop will retain its name and that the college will have final say in any layout or design changes. He said they just need the chain's retail expertise to help run the shop.