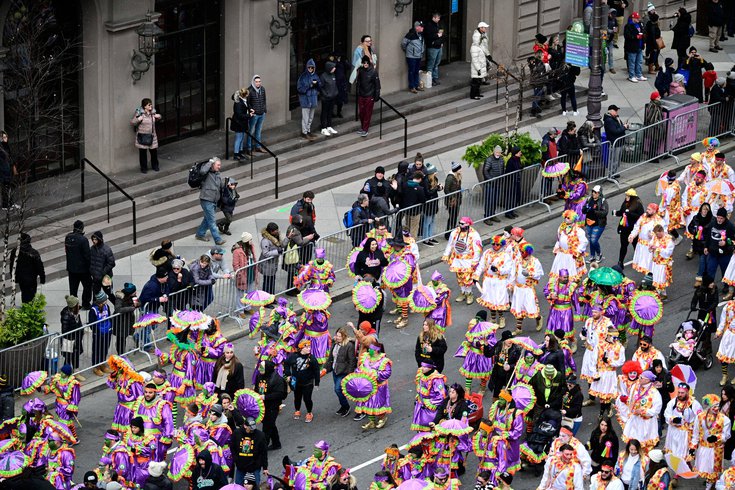 This file photo from the 2020 parade shows mummers marching on South Broad Street. The 2021 Mummers Parade was canceled due to the COVID-19 pandemic, but a group of mummers and supporters organized a protest parade via Facebook that took place in South Philly on Friday.

Some mummers marched on New Year's Day, as they said they would in defiance of the Philadelphia's COVID-19 restrictions on large events.

While the traditional Mummer's Parade on South Broad Street was canceled, this strut along on South Second Street in South Philly, an area where many of the mummers' clubhouses are located, was fashioned as an exercise in free speech by those who organized it on Facebook.

It was called the "New Year's Day Peaceful Protest Against Mayor Kenney." The mayor, a former mummer, said last week he had no plans to stop the groups from marching, but acknowledged he thought it was a bad idea.

"It is important to remember that the bulk of the mummers and their organized groups made it clear that they were not going to march this year because of health concerns," Kenney said. "So the major divisions of the parade who are organized made that decision early on."

During the summer the city opted to cancel all large public gatherings and events in Philadelphia through February in order to mitigate the spread of COVID-19. These restrictions were imposed in July and have resulted in other major events in Philadelphia – like the Thanksgiving Day Parade and the Broad Street Run – being called off, too.

Mummers groups not participating in the protest parade have tried to distance their groups from Friday's march.

In the last day, flyers were distributed in the Pennsport neighborhood around the protest parade route. They asked people to, "Avoid the false parade. Don't embarrass our community. Don't embarrass mummerdom." They were circulated by a group calling itself Mummers Against COVID Denial Anti-S***head New Years Bridge.

Other mummer organizations openly supported the city's decision to cancel the parade in favor of the safety of their members and the public.

And earlier this week, the president of the Mummers String Band Association, Sam Regalbuto, told the Inquirer that many of the people organizing and participating in the protest parade "are not even Mummers" and they were using the cancelation of the parade to push a political agenda or just as an excuse to openly party on New Year's Day.

The Mummers Parade is familiar controversy. In recent years, racist displays by a small number of parade participants have justifiably attracted criticism, like during the 2020 parade when two people who marched with Froggy Carr were seen blackface, which nearly resulted in the city threatening to pull its support for the parade.

In the run up to protest parade, supporters likened their rights to march to those who participated in the Black Lives Matter and social justice demonstrations last summer. It was apparent that flawed analogy was on the minds of least one participant on Friday who carried a sign that read "Mummers Lives Matter" (viewable in the second image of the Instagram post below).

Check out more social media posts from the 2021 Mummers protest parade below.

As a lifelong Philly boy I used to have fond memories of the Mummers and their New Years Day parades.

Today those memories were erased by visions of shitbags ignoring a pandemic and spitting germs all over South Philly. So thanks.

Rogue mummers holding a protest parade is the dumbest and also most predictable Philadelphia controversy to begin the new year. https://t.co/NEjRYC52W3

And transphobia. They had their traditional Mummers parade after all, congrats https://t.co/QzORny7r7b

This group is marching for their friend and mummers DJ George Piccoli, who died of Covid in August. Friends tell me New Years was his favorite day. pic.twitter.com/ud3nz6WJur

None of the local networks are carrying the mummers this year, but you can still follow them through Citizen alerts.

A message for kenney in front of the mummers museum. Someone tell me what a glitter box is. Anyway, covering the parade turned protest. Police say mummers are by 2nd and Mifflin. Headed there now pic.twitter.com/mVyvKrlaed