An event listing for a march on South Second Street in Pennsport says 2,700 people plan to attend. Supporters are upset with Mayor Kenney and city policies 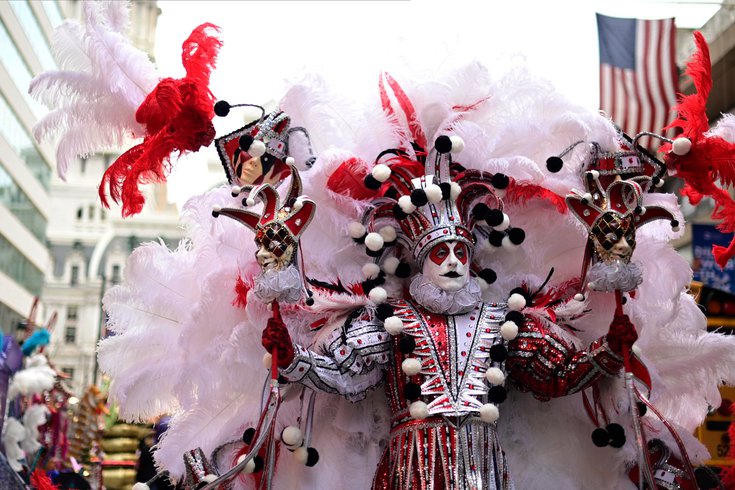 In protest of Philadelphia canceling the 2021 Mummers Parade, as part of broader COVID-19 restrictions, some mummers are using Facebook to organize a New Year's Day march in protest along Second Street in the Pennsport section of South Philly, where many mummers clubhouses are located.

Philadelphia's restrictions on large public events and mass gatherings will not stop thousands who say they will march in an unsanctioned version of the Mummers Parade on New Year's Day that is being organized via Facebook.

More than 2,700 people have RSVP'd to a Facebook event listing indicating they will participate in what is described as a "Mummers/New Year's Day Peaceful Protest Against Mayor Kenney." Another 8,300 Facebook users have responded with "interest" in attending the event.

Between 10,000 and 15,000 mummers participate in the normal New Year's Day parade. The Facebook listing does not appear to be restricted to those who are members or associated with mummers clubs.

The protest is scheduled to take place on South Second Street in the Pennsport section of South Philly, where many mummers clubhouses are located and where the unofficial Two Street parade afterparty usually takes on New Year's Day, following the march down South Broad Street.

This all is an indication 2020 is going to end much like it began, with tension between Mayor Jim Kenney and some mummers. It began with the mayor calling out members of Froggy Carr after at least two of its mummers were seen in blackface during the 2020 parade. Kenney called the incident "abhorrent," disqualified the club from the parade's competition and threatened to pull the city support for the Mummers parade entirely.

Froggy Carr's leaders condemned the racist display and there were weeks meetings between mummers' leadership and city officials.

"Mayor Jim Kenney has tried for years (like every Philly Mayor in the past) to cancel the Philadelphia Mummers Parade, a tradition preceding the birth of our nation," organizers of the protest parade wrote on Facebook. The first city-sanctioned parade took place in 1901, but the custom of mummery can be traced back to some of the earliest settlers in the region.

"What (Kenney) can NOT do is cancel our First Amendment right to peacefully protest his erroneous taxes and restrictions on our freedoms and liberties," protest organizers wrote.

City officials have no plans to stop the Second Street protest. A former mummer himself, Kenney on Tuesday encouraged those will attend to follow public health and safety guidelines, such as wearing face masks.

"It is important to remember that the bulk of the mummers and their organized groups made it clear that they were not going to march this year because of health concerns, so the major divisions of the parade who are organized made that decision early on," the mayor said. "The people who decided that they want to march or protest, we will try to keep them as safe as we possibly can."

City officials have canceled all large public gatherings and events in Philadelphia through February 2021 in order to mitigate the spread of COVID-19. These restrictions were imposed in July and have resulted in other major events in Philadelphia – like the Thanksgiving Day Parade and the Broad Street Run – being called off.

Then last month, several mummers clubs indicated they would still strut in smaller and less organized events on Jan. 1, despite the ban. Some groups hinted at going beyond their own neighborhoods and marching on Broad Street on New Year's Day.

Not all mummers are on board with the protest. The Philadelphia String Band Association issued a statement Tuesday in support of the cancellation of the 2021 parade in order to keep participants and spectators safe from COVID-19.

"Though we are disheartened by these developments, the String Band Association does not think it would be prudent to have their members and tens of thousands of spectators participate in a parade or any gatherings leading up to or on New Year's Day in the City of Philadelphia during this pandemic," the organization said in a statement.

Those organizing the protest say the event is an exercise in freedom of speech, comparing it to the social justice, Black Lives Matter and political demonstrations that have taken place this year.

"As experienced during the summer with the protests for racial justice, and demonstrations around the election, the City is prepared to manage crowds and groups while upholding public safety," a city spokesperson told PhillyVoice.

"This is consistent with how mass gatherings, demonstrations, and marches have been managed in Philadelphia before and during the COVID-19 pandemic. The Philadelphia Police Department is prepared to enforce existing Philadelphia laws when public safety is threatened."