Some members of Froggy Carr were seen wearing the face paint, including one who told a reporter, 'it's a shame to be white in Philly, right now' 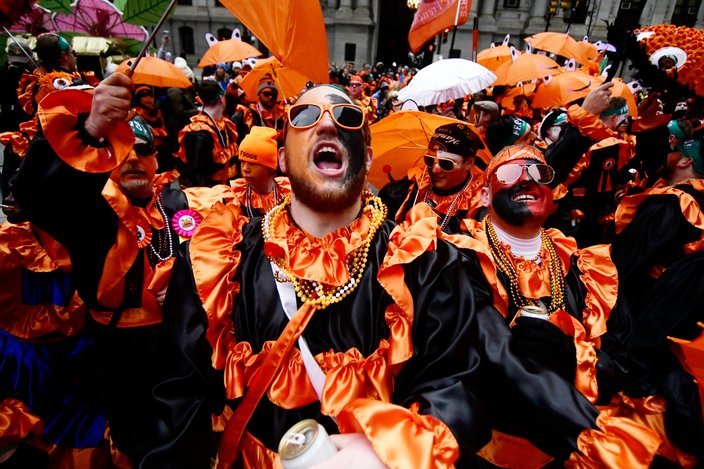 At least two mummers with club Froggy Carr were seen in blackface marching in Wednesday's Mummers Parade, resulting in the South Philly-based wench brigade being disqualified from the competition portion of the New Year's Day event.

Philadelphia Mayor Jim Kenney announced Froggy Carr had been disqualified in a tweet posted Wednesday afternoon. The mayor called the "use of blackface by someone affiliated" with the clubhouse "abhorrent and unacceptable," and he said there could be additional penalties levied against Froggy Carr.

"This selfish, hateful behavior has no place in the Mummers, or the city itself," Kenney tweeted. "We must be better than this."

The use of blackface by someone affiliated with Froggy Carr today was abhorrent and unacceptable. This selfish, hateful behavior has no place in the Mummers, or the city itself. We must be better than this. The group was disqualified and we will be exploring additional penalties.

A Froggy Carr club member Jim Martin, wearing orange and white face paint explained to a CBS3 reporter that the club's theme for the 2020 Mummers Parade was related to Gritty, the Philadelphia Flyers popular mascot.

Martin and other Froggy Carr members were dressed in orange and black costumes, and CBS3's report showed an inflatable Gritty had been hung from the front of the Froggy Carr clubhouse on Second Street in South Philly. Another Froggy Carr mummer standing near Martin in the video wore no face paint at the time of the interview.

But two other members of Froggy Carr did appear on camera in what looked to be blackface. The men denied their makeup was racist, to the CBS3 reporter. "It ain't about that," said one of the mummers, identified by the news station as Mike Tomaszwski.

But then, when asked why he painted his face black, Tomaszwski said, "'Cuz I like it. Why not? Why not? ... I know it's a shame to be white in Philly, right now. Yeah, yeah."

The story was updated with additional information on Jan. 2, 2020, after it was published.