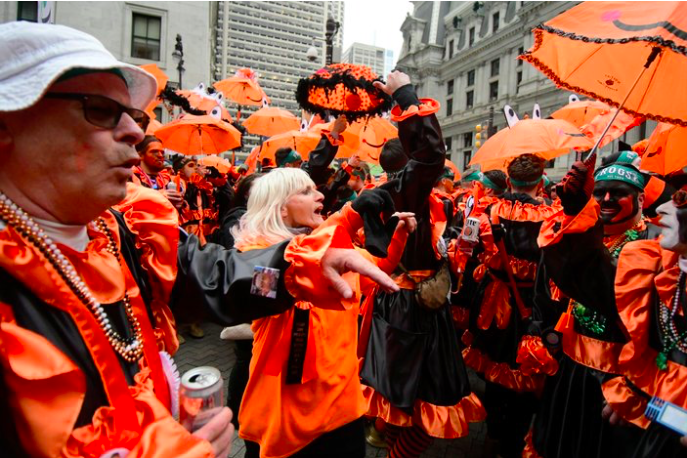 The leaders of Froggy Carr say the two men who wore blackface while marching with the club during the 2020 Mummers Parade will never march with the club again. Froggy Carr members are seen above participating in the parade on Wednesday, Jan. 1, 2020. None the mummers shown above were among those accused of appearing in blackface.

The leaders of the Mummers club swept up in controversy on Wednesday have condemned the two men who wore blackface to the 2020 Mummers Parade, vowing to develop procedures that will prevent future incidents.

Froggy Carr, a wench brigade, came under fire on New Years Day when it was discovered two men — one a full-time member of the mummers club — wore blackface. Philadelphia Mayor Jim Kenney called the blackface display "abhorrent and unacceptable," and Froggy Carr was disqualified from the competition portion of the parade.

The club's theme for the day was related to Philadelphia Flyers mascot Gritty. Participants in the parade dressed in orange and black costumes. Many painted their faces various combinations of orange, black and white; while some didn't paint their faces at all.

The two men who wore blackface broke from the ranks, Froggy Carr president Stephen Pakech said Thursday at a press conference. He was joined by club captain Joe Renzi and other parade leaders.

Pakech said the two men applied the blackface last-minute after the start of the parade, when costumes had already been checked by club leaders. Their actions were not sanctioned or approved.

Calling the incident "completely wrong," Renzi said that he and other club leaders will typically pull anyone with an inappropriate costume from the parade before it starts. There are about 120 official members of Froggy Carr, but hundreds of others can pick up costumes related to the club's theme to march with them on the day of the parade.

The club said the two men in blackface will never march again in the Mummers Parade. Froggy Carr will talk to other brigades and divisions to ensure that they are removed from the tradition.

In a statement to CrossingBroad, the Philadelphia Flyers condemned the use of blackface by a club that appropriated their colors and theme without approval.

"We stand united with the entire Philadelphia community in condemning the brigade’s offensive racial symbolism," the organization said.

After several years of similar incidents at the Mummers Parade, the event is facing greater scrutiny for its inability to keep displays of racism out of the New Years celebration.

City Council President Darrell Clarke said the city must find a way to stop these incidents from occurring.

It's not clear what additional punishment the two men who wore blackface — or Froggy Carr as a whole — could face in the wake of Wednesday's incident. Mayor Kenney hinted at potential further action by the city.

"We want to do things the right way and make sure that this fantastic tradition is mended, not ended," Badey said.