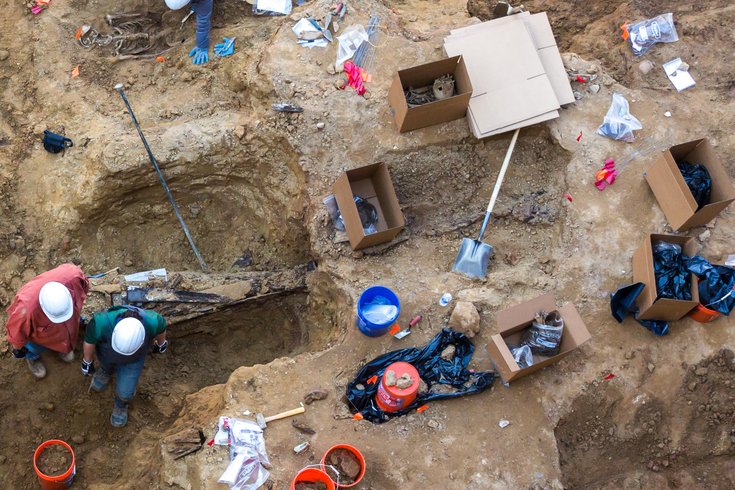 Want to make history? Here's your shot – though, it might cost you a few bucks.

The Mutter Museum is continuing a crowdfunding campaign to help store, analyze and re-inter the skeletal remains of what's believed to be some of the very first Philadelphians who were recently unearthed at a construction site in Old City, according to Mental Floss.

The campaign that launched late last month called the "Arch Street Bones Project" has collected about $4,000 of its $20,000 goal.

More than 70 coffins were discovered as crews from PMC Property Group began work on what will soon become a building and parking garage at 218 Arch Street, the former First Baptist Church Burial Ground.

Crews found remains that date back to the 1700s when they began work in September, though additional coffins were found in the beginning of March.

The bodies were supposed to be relocated to the Mount Moriah Cemetery in southwest Philadelphia after the congregation closed its doors in 1859, but their recent presence indicated that the plan didn't play out as initially thought, according to the museum.

By studying the remains, researchers can better understand how Philadelphians lived during those early years.

Here's what the museum has to say in its fundraising campaign:

"The analysis of the material recovered from the Arch Street project is potentially transformative to our understanding of who earliest residents of Philadelphia were and what their lives were like. All of the remains can reveal insights about diet, disease and injury, the bodily stresses incident to manual labor, childbirth practices, and mortality. Some of them may have died during the 1793 yellow fever epidemic; others may have succumbed to the 1849 cholera epidemic, disasters that also threatened the stability of the local and new federal governments."

Kimberlee Moran, director of forensic science at Rutgers University-Camden, recently told Mental Floss that there are so many remains that researchers can't keep them in one location, forcing them to be shared by the school and museum.

The $20,000 will help their efforts in moving the bones to one place in order to better analyze them, according to the publication.

“The excavation was just the beginning of the project,” Anna Dhody, Director of The Mütter Institute said in a statement. “It will take months, if not years to conduct all the cleaning and analysis of the remains. And it will take the financial support of our community, both local and far-reaching, to contribute to this endeavor.”