A young boy was out with his journalist father over the weekend when they were photographed by Brandon Stanton, who runs the popular Humans of New York (HONY) blog.

The boy revealed his dream to one day be a journalist too and how he would interview NASA about future rocket launches.

His photo and quote were posted to the HONY Facebook page. 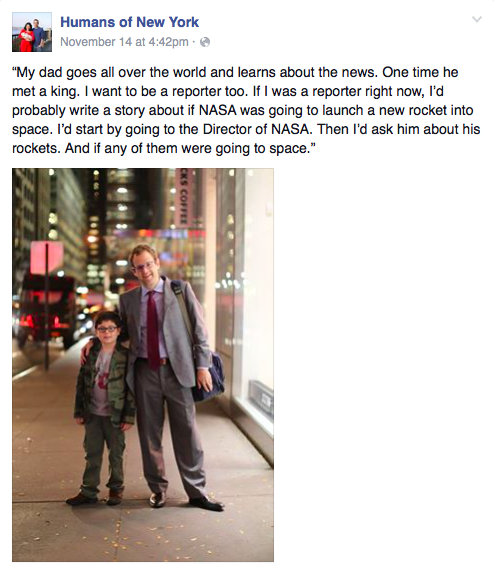 The post quickly caught the attention of the space agency, which decided to answer the boy's interview question.

"We *are* going to launch a new rocket into space!" NASA's official account said in a comment on the post. "We're developing NASA's Space Launch System to be the world's most powerful rocket and launch NASA’s Orion Spacecraft into deep space, first to lunar orbits then eventually farther on the journey to Mars."

Many Facebook users praised NASA for taking the time to respond to the aspiring journalist.

"Thanks for replying to the boy. I'm pretty sure this would mean a lot to him!" Facebook user Lorena Lopez said in a comment.

"Great work, NASA!!! And great work to this kid for getting the scoop before he even officially became a reporter!" user Cordelia Elsinore wrote.