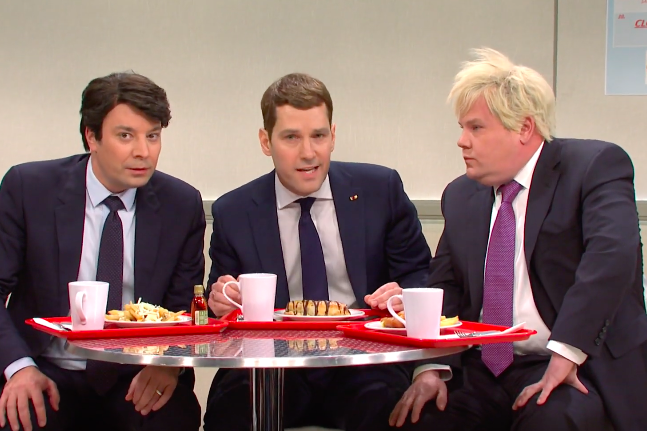 "Saturday Night Live" returned on Saturday with host and musical guest Jennifer Lopez. The multi-talented performer delivered a number of memorable sketches — most notably the HGTV's Surprise Home Makeover sketch — but the highlight of the evening was the show's cold open.

We're introduced to NATO's super cool, super popular bad boys. (Though, Johnson is little more of a third wheel, because he's a bit "cringe.") After telling Romania's leader to scram so they could secure their table, Trump comes in and he's all, "Is this seat taken?" And Trudeau is like, "Oh, sorry, it is," who then recommends he sits with Latvia's leader — who's nicknamed "Egg" and is eating pickled squid.

When Trump realizes he's sitting at the loser table, he overhears Trudeau trying to convince Johnson to host a party at Buckingham Palace. After trying to invite himself, they tell him he wouldn't like it since he'd have walk upstairs and there will be tiny food portions.

He then tries to take a seat at the table once more, but instead, the cool kids invite the band geek of the NATO leaders — German Prime Minister Angela Merkel, who has to decide if she wants to bring her flugelhorn to the cool table or not.

If things couldn't get worse for Trump, Johnson then plants a sign on the president's back that says, "Impeach me!"

Watch the sketch below.