NBA Reports and Rumors: What Chris Bosh’s potential absence means for the Sixers

Since the NBA trade deadline is just a few days away, we will have a few posts on the news and rumors going around the league and how they relate to the Sixers. Here is Tuesday’s batch…

Chris Bosh is one of the NBA’s most interesting people, so to begin, let’s send some good thoughts his way as he reportedly deals with another blood-clot scare. The 11-time All-Star is both a good player and good dude by all accounts, so hopefully he can recover quickly from what is another serious situation.

To shift the conversation to basketball, Bosh’s health has serious implications on the Philadelphia 76ers, who are owed a first-round pick from the Miami Heat. Like most of the first-round picks Sam Hinkie has acquired, this one has confusing yearly protections placed on it. Since the Heat snuck into the top-10 of last year’s draft, there are now only two scenarios for the pick left:

So, either the Heat have another late-season slide or the Sixers get to make the pick this year. First, here is what we know about Bosh’s situation from a couple of reporters down in South Florida:

AP has been told that Heat forward Chris Bosh has resumed taking bloodthinners to treat a clot and has hopes of playing again this season.

Like last year, Bosh is on blood thinners. Unlike last yr, it was not essential to stay in hospital because clots haven't traveled to lungs.

The Miami Herald’s Barry Jackson talked to some doctors about the potential of Bosh returning to play this season. We need to hear more information on Bosh’s diagnosis, but there is at least a chance that the sweet shooting 6’11” big man sits out the rest of the 2015-16 season. Nothing is set in stone yet, though.

For the sake of argument, let’s say Bosh misses at least the rest of this season. Could the Heat, currently the fifth seed in the Eastern Conference and owners of the 21st pick, fall into the lottery and potentially the top-10 of the draft? 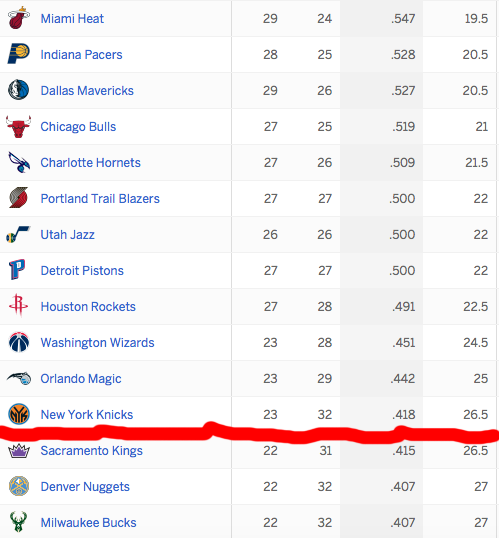 Those are a lot of teams Miami would have to slide past (not to mention Atlanta might blow things up, as well), but Bosh would be a major loss. As someone who hasn’t watched all that much Heat (Two Minutes, Dos Minutos!!!) since LeBron took his talents back to Ohio, I will defer to ESPN’s Zach Lowe and his All-Star piece from a few weeks ago. Lowe said Bosh was one of eight no-brainer East All-Stars:

Bosh has easily been Miami's best all-around player -- and the most underappreciated player in the sport. He is the common denominator in almost all of the Heat's best lineups, a tribute to his two-way versatility.

If Bosh were to miss the rest of the season, Miami would very likely take a step back in the standings. The question is how far. With today’s Chris “Birdman” Andersen salary dump, Miami is already working on lowering its luxury tax:

If I were to bet, a Bosh-less Heat team will drop in the standings to place the pick somewhere in the teens (but not far enough to vault into the top-10). Is that the Sixers’ best-case scenario, though? Likely not.

Considering the relatively weak 2016 draft class, the Sixers would be better off watching Miami plummet this season. That way, the Heat’s first-round pick becomes unprotected in 2016-17. With a reportedly stronger draft class coming in next season and no limits on the pick, the potential reward would be much greater.

Miami has cap room this offseason, but the Goran Dragic deal has gone terribly thus far and Pat Riley has very interesting decisions to make on free agents Dwyane Wade and Hassan Whiteside (not to mention Bosh if this health scare keeps him out long-term). Still, Miami always sits at the high stakes table in free agency and Riley can never be counted out completely with the big fish. No state income taxes, South Beach, and a stable organization will always be a draw.

The Sixers can’t do much but sit back and watch what happens in South Florida. Likely, the pick will convey this year and the return for one season of Thad Young won’t be anything close to a superstar. Regardless of what happens, please get better and stay healthy, Chris Bosh.

Guard Michael Carter-Williams has been told by the Bucks that he would not be traded, a source said, but the Sixers told him the same thing.

There were some vague reports a few weeks ago that Carter-Williams was on the block, but Spears is a very respected source. Whether or not MCW will be on the move, it’s safe to say that Year 1 has not gone how Milwaukee imagined it would:

The Sixers took on a struggling Kings shooting guard this summer, but Nik Stauskas hasn’t turned things around. According to Sam Amico, another King is on the block:

The Timberwolves are among the teams talking to the Kings about shooting guard Ben McLemore, per 1500 ESPN radio in Minneapolis. The Kings are “desperate” in their attempts to move McLemore before Thursday, a league source told Amico Hoops. McLemore has also been linked to the Cavs.