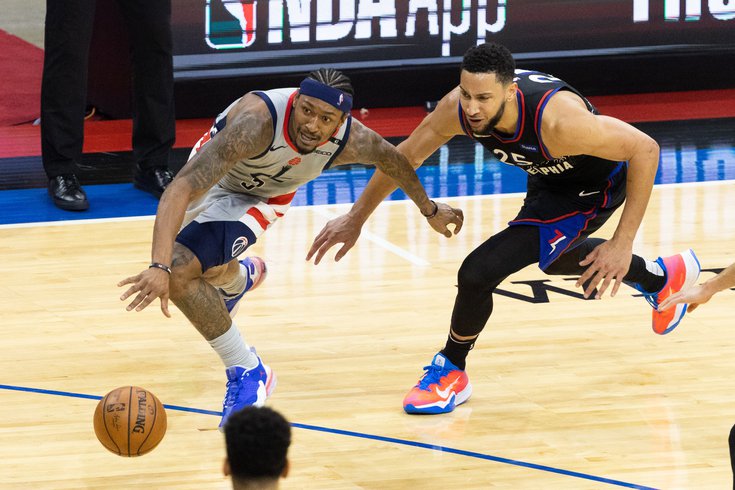 Bradley Beal, monitored closely by executives around the league for years now, is surrounded by more rumors than ever regarding his future in Washington. And the Wizards' star guard, according to a new report Monday, was after a member of Philadelphia's coaching staff to take over the job in D.C.

That coach? Sam Cassell, an oft-mentioned name in Philadelphia who has a history with Beal and an extensive track record/multiple championships as a player. According to Fred Katz of The Athletic, Cassell losing out on the Wizards' coaching job to Wes Unseld Jr. could be a factor in Beal re-evaluating his time with Washington:

But that control didn’t reach the Wizards’ recent head coaching search the way Beal wanted, according to sources, one of the reasons he was frustrated when his top choice for the job — 76ers assistant Sam Cassell, an assistant with Washington during Beal’s first couple of NBA seasons — couldn’t land a second interview. Former Nuggets assistant Wes Unseld Jr. eventually landed the gig, replacing the incumbent Scott Brooks earlier this month.

This is the same Beal who wants the one-team legacy. But one of the main reasons he chose to remain in Washington for all of these extra years, when teams around the league considered a trade demand inevitable as the team continued to fall short of championship contention, was because of control that may not be as all-encompassing as he once thought. And thus, he reassesses.

Not demands. Not requests. Not suggests. But re-evaluates, given the evolving circumstances.  [The Athletic]

Beal's future in Washington has been questioned even as he has constantly offered commitment to the organization publicly, for reasons that are relatively easy to understand. He finds himself in a situation where it seems like he would want to get out of there. The Wizards have been at something of a dead-end for years, and a late-season push to make the playoffs and get slaughtered by the Sixers isn't what anyone would expect a high-level player like Beal to settle for.

The head coaching search, then, was an opportunity for Beal to potentially wield his influence and shape the organization as he sees fit. With Washington going away from Cassell and away from Beal's reported desires, they have at the very least shown they are willing to put what they believe is best over the immediate happiness of their star. Now, it's time for Beal to make a decision he has deferred for some time.

Cassell's relationship with Beal, even if it would be from the assistant's chair in Philadelphia, is an important factor to consider while surveying the landscape of potential offers. Beal's contract is set to run down sooner than later — most expect him to turn down his 2022-23 player option — and getting a sense of where his head is at and what he wants is critical before potentially making a move for him.

This situation could get urgent rather quickly, with Katz reporting that a decision on his future could come from Beal "as soon as this week." And so that begs an important question — what is Beal worth to the Sixers and the market at large, and should they move quickly to get him?

Beal, who left college with a rep as a sweet shooter who would pair nicely with John Wall, has blossomed into one of the top scorers in the NBA. He has averaged over 30 points per game each of the last two seasons in Washington, a danger man from every area of the floor you can think of. What Beal lacks in top-end athleticism, he makes up for in craft, weaving artful finishes into gut-punch stepbacks into contested shots that are demoralizing for opposing defenses. Beal has become a more dangerous pick-and-roll operator over time, a solid, if unspectacular playmaker who can make the right reads when the pressure tilts in his direction on the floor. And Beal's most important development over the last couple of seasons has been an uptick at the line — Beal has ranked near the top in free-throws attempted each of the last two seasons, ranking ahead of James Harden and Damian Lillard in 2020-21 with 7.7 attempts per game, the sixth-best mark in the league.

The benefits for Joel Embiid's Sixers are not as obvious as with, say, Damian Lillard, because Lillard is a more dangerous offensive player on-ball with deeper and more consistent range than Beal. A Beal-Embiid pick-and-roll would not be as scary as with Lillard, simply because Beal is not as good of a playmaker as the Portland point guard. That said, he would draw a significant amount of attention away from Embiid, give the Sixers a big-time creator to turn the controls over to, and Beal only just turned 28 years old, giving him some additional years of physical prime to (potentially) share with Embiid.

And Beal, mind you, could stand to help Embiid in the Sixers in a lot of other ways on offense. The two-man game Embiid has succeeded in running has always been with a secondary offensive threat at best. With due respect to Seth Curry and JJ Redick, neither is anywhere close to Beal's level as a threat to punish defenses turning the corner on a handoff or attacking a closeout. Beal's lack of advanced playmaking can be hidden in some of those looks, and in an Embiid-centric offense, Philadelphia could tap into his off-ball shooting prowess, focusing on creating easy looks for him that don't involve Beal slaloming through multiple screens and defenders, saving some energy for the star guard to use elsewhere.

He could stand to save a bit more, because Beal has been an outright bad defender for years. Beal has gotten worse as he has assumed a heavier burden on offense, and you could make the case that he'd trend closer to passable with superior defensive coaching and an elite backline anchor in Embiid. But his effort on that end has been a regular issue, something that would have to be reckoned with in order to build a legitimate contender with him as a building block.

That fact, combined with Beal's aforementioned limitations as a playmaker, complicates trade discussions on Philly's end a bit. In a two-team deal, we can say with certainty that Ben Simmons and picks are where discussions would begin. But what else are you willing to concede if it takes more? He probably needs a dose of playmaking in the backcourt with him, which would make parting with Tyrese Maxey tough. And the defensive questions would increase Matisse Thybulle's importance to Philadelphia, who would certainly be pressed to include him by the Wizards.

(Ultimately, Beal is good enough and a clean enough fit that you can shove some of those questions aside. But personally, I think he's less of a "throw the kitchen sink at them" guy than Lillard.)

Looking at the landscape and how the Wizards typically operate, some of this discussion would hinge on what they're after and what Beal wants. If Beal pushes for an exit pre-draft, perhaps the Wizards pursue a quicker rebuild and prefer a package from the Warriors, who can offer multiple lottery picks in this year's draft on top of whatever else they're willing to offer down the road. Maybe Beal doesn't love Sam Cassell and a partnership with Embiid enough to turn down the opportunity to push for a trade to Miami, or team up with his St. Louis buddy Jayson Tatum in Boston. Any number of factors could leave Philly on the outside looking in here.

And then there's another big one — maybe Daryl Morey would rather wait for Lillard or another as-yet-unseen possibility that isn't available by the time Beal is shopped and shipped out. Beal is a dynamite scorer, but he is (probably) not a solution to Philly's problems all by himself. You could easily justify making a move for him anyway. If you can get a star right now rather than waiting for the hope of acquiring one down the road, it's almost always prudent to do so with the knowledge you can change things up later.

The big question now is whether Beal actually puts the wheels in motion for us to debate in the first place. Until he starts walking toward the exit door, things will remain stagnant. Get ready for a hectic week.