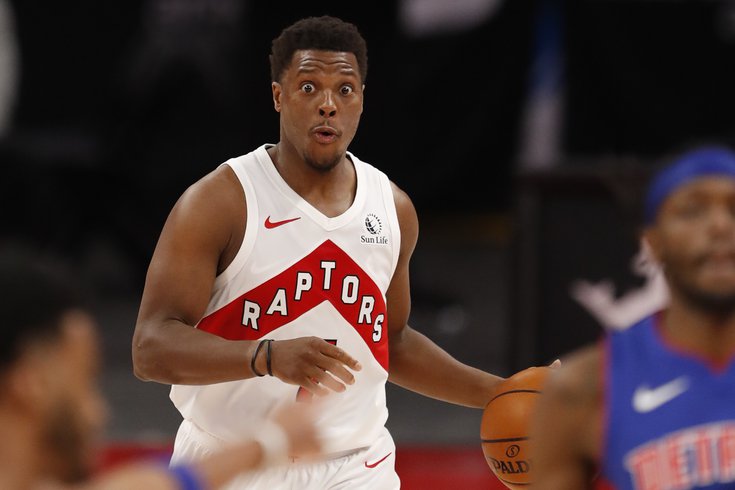 A pair of reports from two different outlets released on Monday morning paint a similar picture. First, Shams Charania of The Athletic named the Sixers one of two teams aggressively pursuing Lowry before the deadline.

The Miami Heat and Philadelphia 76ers are leaders in pursuit to acquire Lowry, sources told The Athletic, and several rival team executives are monitoring the situation as well as which young player or asset either team could part with. Lowry has spent the last nine years in Toronto, cementing himself as a legacy player for the Raptors and as arguably the best player in franchise history. Lowry’s arrival in Toronto predated Masai Ujiri’s presidency, and to fans, he represents a through line that connects the Raptors’ fight for relevancy at the beginning of his time with the franchise to their current status as one of the league’s most respected organizations.

Those with knowledge of Lowry’s mindset believe he wants to compete for a championship, however, and that is what makes this season in Toronto so complicated. Lowry and the Raptors have built such a relationship that both sides would work on any potential trade or decision for him to stay through the deadline, and the latter scenario would leave for a more organic end to the campaign prior to his summer free agency.  [The Athletic]

At nearly the same time, ESPN's Zach Lowe dropped a column on everything he has been hearing around the league-leading up to the deadline. Lowe named the Sixers, "the most reasonable landing spot," noting Philadelphia's ability to offer a suitable package and a desirable destination for Lowry, but his most important tidbit on Lowry is arguably his first one (bold emphasis mine):

Lowry is the rare player who might be able to swing the championship balance. Several recent reports in the Toronto media have suggested the Raptors are unlikely to trade Lowry, including one report that the Raptors have straight up told suitors they will not deal him. I have not heard that from league sources. Other teams tell ESPN the Raptors have indeed not yet been aggressive engaging on Lowry talks. That does not mean the door is closed. Such doors are almost never closed until the deadline passes.  [ESPN]

Toronto's recent swoon (they are 1-9 in their last 10 and losers of eight straight games) has forced the Raptors to think about their outlook on very different terms than they would have just a month ago. Lowry playing at a high level, along with a career year from Norm Powell, has not been enough to push them to respectability in the East, with the Raptors several games out of even making it into the play-in round for this year's playoffs.

That may solve the biggest problem the Sixers have had regarding a potential Lowry deal — availability. Lowry is a franchise legend in Toronto who publicly rebuffed the idea of pursuing a trade in recent weeks. He and his agent have made it clear that any moves made would be in conjunction with a front-office group they have strong relationships with.

On their end, the Sixers have repeatedly expressed doubt about their ability to pull off a move for Lowry (or a sizable move of any kind), setting expectations low for what they might accomplish during this deadline period. Their end of the story has been relatively consistent: they want upgrades, but they aren't sure there's a reasonable path to making one happen.

If the Raptors have reached the tipping point, Lowry and the Sixers are ideal for each other. The veteran guard wouldn't just get to return home to Philadelphia, he would join a team with a real chance to compete for a title — they're currently in first place in the East and have the sixth-best title odds in the NBA (+1200), according to Pa.Unibet.com — and would be the final piece of the puzzle for a group in good spirits that fits well with one another.

It would be difficult for the Sixers to find a guy who rounds out their starting lineup better than Lowry. He would instantly be the best pick-and-roll player on the roster by some distance, combining those on-ball gifts with the ability (and willingness) to do all it takes to fit in off-the-ball as well. Lowry can be the catch-and-shoot outlet on a post touch for Embiid, the ballhandler for a pick-and-roll with Simmons, the playmaker who creates more open shots, and the lead guard defender who could help with their leaky perimeter defense outside of Simmons. He would be a nailed-on starter for Philly, but the more profound effect could be on the second unit, where Rivers would have a lot of flexibility to try different things night-to-night.

He's no slouch on the other end of the floor either, where Lowry can still capably defend high-level guards as the head of the snake for your defense. With Lowry at the point-of-attack, Simmons on the best wing player, and Embiid anchoring the paint, the ingredients of a potentially terrifying defensive group would be on-hand.

In terms of cost, nothing has been reported that suggests the price is different than what we've floated since the start. Danny Green's salary is the most obvious path to matching finances, and along with some throw-in contracts, the Sixers will have to part with at least one of their young role players (Tyrese Maxey or Matisse Thybulle) and draft compensation. Philadelphia has had plenty of time to ponder whether that's ultimately too much for a guy who moves the title needle for them and could stick around as a useful contributor beyond this year.

I don't think it would stop the Sixers from pulling the trigger for Lowry, but Green's play out of the All-Star break has highlighted something Philadelphia believed about him when they acquired him from Oklahoma City: he's a culture-setting player who makes them better on both ends, and they will not give him away just for the sake of making a trade. He may not have a lot of present-day value to the Raptors if they're accepting a short-term reload, but losing Green in any deal would be a loss they'd have to make up for.

(I maintain that Maxey is probably more valuable to a team like the Raptors in this scenario, with Thybulle's offensive limitations and age putting a cap on his ceiling, though it's unclear whether Toronto agrees with that assessment.)

There is potential for long-term downside here, with Lowry a threat to decline sharply in his mid-30s. If the Sixers were somehow able to swing a deal, that's something they would have to consider long and hard before moving forward with contract talks, especially considering the tax implications of extending Lowry past this year. And that's without factoring in opportunities they could be missing out on down the road by sacrificing assets in the short term — does a Lowry deal remove enough picks and players to take them out of a potential Bradley Beal sweepstakes down the road, for example?

This one will likely come right down to the wire, with the Sixers weighing whether he gives them a good enough shot at the title to assume the risk, and the Raptors wondering whether they should trade a franchise hero in the first place. I would love to be a fly on the wall listening to Daryl Morey and Masai Ujiri debating proposals back and forth, and we'll see where the dust settles when it's all said and done.