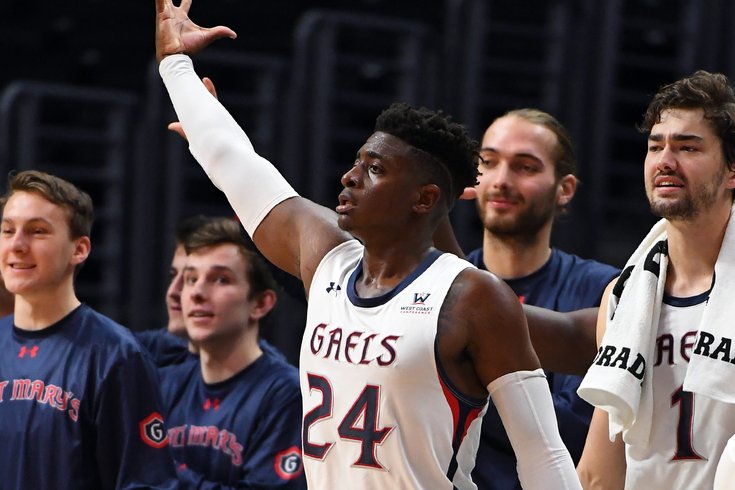 St. Mary's Gaels forward Malik Fitts reacts on the bench after a 3 point basket in the second half of a game against the New Mexico Lobos.

Throughout the football season, Steve Maltepes, known as “The Philly Godfather,” imparted his gambling wisdom on PhillyVoice readers. Now, with the NCAA Tournament underway, we'll take a look at where the smart money is going this March Madness season. Maltepes is one of the nation’s hottest sports betting experts who appears weekly on national radio and has his own website, www.thephillygodfather.com.

The AGA expects one out of every five adults will participate in March Madness action, which is greater than the one-out-of-every-10 American betting on the Super Bowl.

The crazier your bracket looks, the better chance you have to win.

No. 12 Liberty (28-6) plus-7.5 over No. 5 Mississippi State (23-10): Mississippi State has under-performed in the market and is 16-17 against the spread. Liberty can shoot the ball well. Liberty is good value, since it’s a team that shoots well beyond the arc (37%). The betting public is betting 75 percent on Mississippi State.

MORE: Pick these 5 first-round NCAA tournament upsets on your bracket

Gonzaga has the easiest road to the Final Four. The Bulldogs fit four primary criteria: top 50 in rebounding, effective possession ratio, in height efficiency and three-point shooting. They have size, can score and they don’t turn the ball over often. Gonzaga gets complaints about an easy schedule, but they beat Duke earlier this year on a neutral court and lost to St. Mary’s, North Carolina and Tennessee. The reason why Gonzaga gave Duke headaches is Duke doesn’t shoot the three well. The only team that may derail Gonzaga in the West is Syracuse. But Syracuse doesn’t shoot the three very well, though the Orange have better height than Duke.

Betting lines are subject to change.