Anxious about getting the COVID-19 vaccine? Experts offer coping strategies 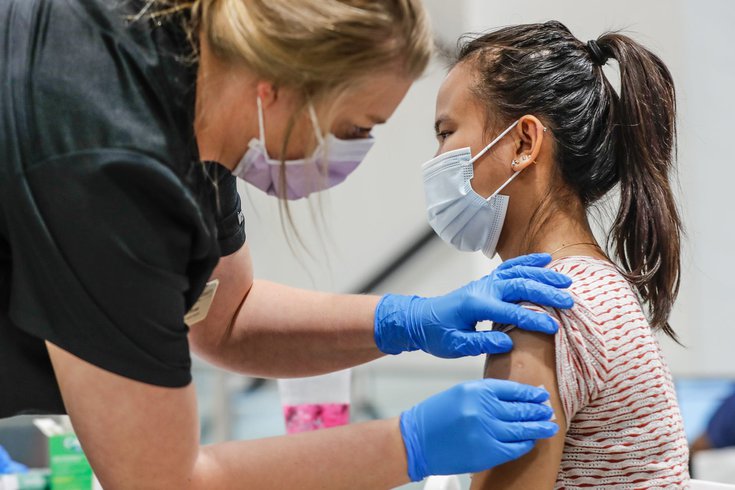 Anxiety-related reactions to needles are not uncommon, especially among younger people.

Vaccine hesitancy remains an important barrier toward ending the COVID-19 pandemic, experts say. For many people, a general fear of needles as well as anxiety about these specific vaccines is keeping them from getting the shot.

One survey by the Delphi Group at Carnegie Mellon University found that in March vaccine hesitancy was at about 22% of the working-age adults polled.

Some Americans still have concerns about how quickly the research and development of the COVID-19 vaccines were ramped up. And reports of serious side effects like those linked to the Johnson & Johnson vaccine have only added fuel to the fire.

A new report from the U.S. Centers for Disease Control and Prevention, however, shows that some of the immediate vaccine reactions that have occurred are due to anxiety and not the vaccine itself.

Over just a period of three days between April 7 and April 9, vaccine clinics in California, Colorado, Georgia, Iowa and North Carolina began reporting a series of immediate reactions to a COVID-19 vaccine.

Overall, 64 people had a reaction across the vaccine sites. Many of them either fainted or became dizzy, and some either vomited or said they felt nauseous. Others described a racing heart or chest pain. Most of the reactions resolved within 15 minutes. There were no serious illnesses.

All 64 received the Johnson & Johnson vaccine. To be cautious, four of the the five clinics shut down temporarily. Investigation into the reactions, which included interviews with clinic staff, showed that the vaccine recipients had a physical reaction to the anxiety they were feeling.

The CDC says that about 25% of the people who had an immediate reaction had similar experiences with other vaccinations.

These reactions, the federal agency said, are different from other side effects associated with the COVID-19 vaccines. The most common are a sore arm, fatigue, headache, fever and chills. The reports of blood clots after the Johnson & Johnson vaccine led to a temporary halt in the vaccine's administration. The blood clots were found to be a rare side effect, however, and the vaccine is now available again.

Noni MacDonald, a Canadian researcher, told NBC News that anxiety-related reactions to needles are not uncommon, especially among younger people.

Some can even experience what initially looks like a severe neurological reaction. She pointed to a study of U.S. military reservists who had a reaction to the flu shot in 2009. One of them was a 23-year old man who developed weakness in his extremities a day later. He fully recovered.

Nervous about the COVID-19 vaccine, but still want to get it? Experts from the University of Pennsylvania, Houston Methodist University and other sources say there are a few things you can do to reduce your anxiety before your appointment:

• Be sure you eat something prior to your appointment.

• Let the vaccine provider know you are nervous or have a history of fainting.

• Ahead of time, discuss any concerns about the vaccine's effectiveness or side effects with a trusted source of information, such as your primary doctor, or review information from the CDC.

• Practice relaxing techniques, like taking deep breaths in through the nose and out through the mouth, right before the shot.

• Distract yourself from what is happening by looking at something else or having a conversation during the injection process.

Thea Gallagher, director of Outpatient Clinic at Penn's Center for the Treatment and Study of Anxiety, said thinking about how you will get to the site, the vaccination process and how you will be monitored for a reaction afterward can help ease anxiety.

"Needle phobia is very real and understandable. People don’t get needles every day, so they never have the chance to habituate to them. Plus, as any evolutionary biologist will tell you, the idea of a sharp object piercing the skin doesn’t seem normal," she explained to PSYCOM.NET.