Nelson Agholor is tired of hearing about his drops 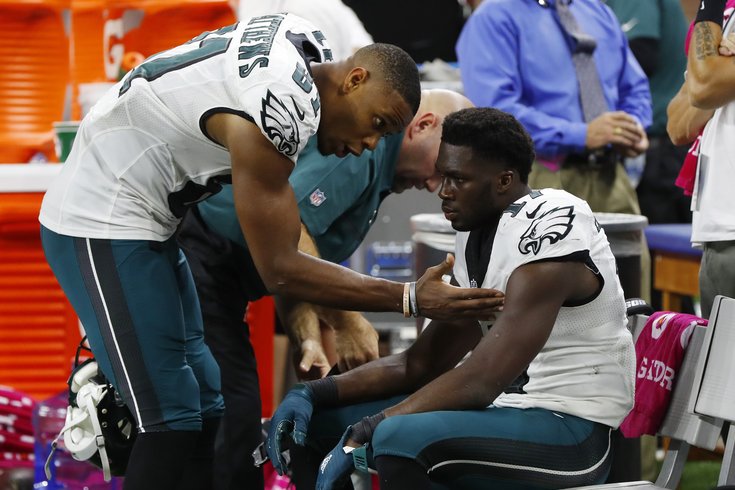 Nelson Agholor would prefer you not focus on his stats.

The professional football career of Philadelphia Eagles wide receiver Nelson Agholor has not gone well. In his rookie season after the Eagles selected him with the 20th overall pick, Agholor played in 13 games, starting 12 of them. He had 23 receptions for 283 yards and one touchdown.

That's as unproductive as it gets for a player starting at least 75 percent of his team's games.

So far in 2016, Agholor has 21 receptions for 216 yards and one touchdown in seven games (six starts). That would be an average of 30.9 receiving yards per game, which would rank him 122nd in the NFL in that category. And yet, that is an improvement over 2015.

A season ago, the Eagles as a team led the NFL in drops. Those drops have carried over from the Chip Kelly era and have persisted under the guidance of Doug Pederson, often stalling drives and limiting point.

Against the Dallas Cowboys Sunday night, the Eagles depended on Agholor to pick up a first down on 3rd and 6 from the 12-yard line. Aaaaaand, drop:

Had Agholor made that easy catch, it almost certainly would have gone for a first down, leaving the Eagles with a 1st and Goal from somewhere within the five-yard line. Agholor was asked post-game about the drops.

"I don't give a damn, man, that shit is nothing," he said. "You just have to make the next one. Everybody runs routes. Sometimes they are contested. Sometimes you drop them. If you make as many as you possibly can that come your way, you'll put yourself in a good position. No one is perfect.

"I don't look at no drops, or that type of shit. I'm tired of hearing that shit. It's just stupid. We play football. I dropped the first one. I didn't drop one after that. What does it matter? Because if we lose, then it's like we'll place blame on this person did this. No. As a team, we have a responsibility to win football games and I get it, some plays could have helped. But there are sill four quarters of football to be played and we got to win.

In his first two seasons in the pros, Agholor's drops are high. His receptions, yards, and touchdowns are low. While Agholor would prefer the focus not be on stats, no matter how you slice it, he is not helping the Eagles win football games.