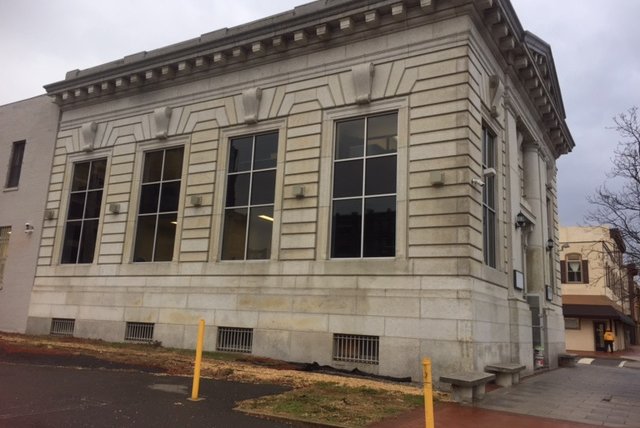 Multiple would-be purchasers had an interest in this property on the 100 block of Market Street of downtown Camden. A group of architects bought it without any support from tax credits or other governmental incentives. They plan to work from there, as well as lease coworking space.

Something unheard of in decades is happening in Camden: a noticeable uptick of interest in some commercial real estate.

And not just in targeted areas, such as the Waterfront facing Philadelphia, the Gateway area near the Campbell Soup headquarters and the eds & meds corridor along Broadway, near Rowan University’s medical school.

Take, for instance, the recent sale of 121 Market St., a former bank building which had long sat vacant, teetering toward foreclosure.

The newly-restored property, which opened for business on Monday as a blend of dedicated professional office space, as well as flexible coworking space, sits a block from the Waterfront. 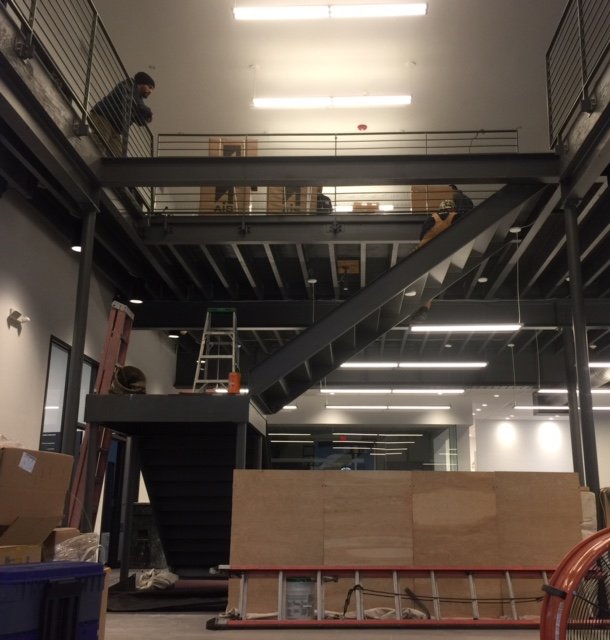 The space inside 121 Market Street will house an architectural and planning firm, as well as a coworking place in an open setting.

It’s on the main downtown corridor linking Camden city and Camden County buildings clustered around 5th and 6th streets, the federal courthouse and post office at 4th Street, L3 Technologies sprawling along several blocks, and heads all the way to the Waterfront, just beyond Riverside Drive.

Unlike many commercial spaces in the city, the property had multiple interested buyers – an unheard-of occurrence in Camden’s recent past. More telling, the property was bought without governmental financial assistance.

That’s unusual for Camden, where state tax credits have juiced up interest in the development of the Waterfront and Gateway areas.

The winning buyer of the former bank had applied for tax credits, but went ahead with purchase even after being turned down by the state’s Economic Development Authority.

The background of the winning buyer also makes a statement about who is interested in Camden real estate – and why.

The buyer, a new firm called City Invincible, is a merger of established architectural, design and planning firms, three with roots in affluent South Jersey suburbs and one from Philadelphia.

City Invincible’s Angelo Alberto said Camden made sense because he and his partners wanted to be in an affordable urban center with accessible transportation. They made a purchase offer, which was accepted.

“And right after that, the climate changed” in Camden, he said, and other interested buyers lined up.

The property sale closed last August for $450,000, but with renovations the costs topped $1 million. It is now appraised at $1.2 million, according to Alberto.

Jeff Sjogren, a 26-year-old law student at Rutgers, has seen small positive changes on Market Street during the past two years. He has lived on the 200 block of Market with his fiancée, who works in real estate in Philadelphia. And despite graduating in May, they are considering staying in downtown Camden.

“There’s the convenience. PATCO means opportunity," he said. "It is the safest place in the city. We’ve never even had a property crime here. 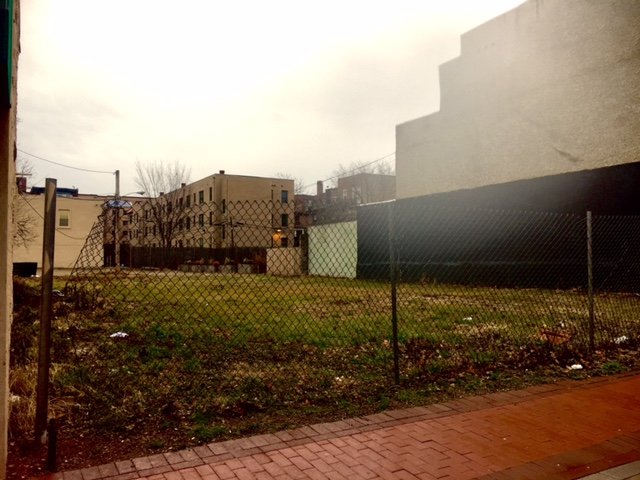 While there has been a slight uptick of interest of in Camden commercial property, there are still empty lots and vacant properties along Market Street, the corridor which ties governmental buildings in the city's downtown to the Waterfront.

“There’s been a wave of change in the area,” he added, though the change is not uniform, he noted, standing in front of an empty lot while walking his dog.

“There are options here now. But it takes time,” added Sjogren.

Kalif Harris maintains the downtown for the Special Improvement District. He’s seen changes in the year he’s worked for the district.

“It is getting better for the city," he said. "People and money are moving back to the city."

Raymond Lamboy, the president and CEO of the non-profit Latin American Economic Development Association, which sits on the Market Street corridor, understands the appeal of the former bank property in particular and Market Street in general.

City Invincible is a "feeder business” to the development planned for the Waterfront and elsewhere in Camden, he said. “Their proximity makes sense.”

The major business in Camden for the next 10 to 15 years is going to be construction driven by the government via tax credits, said Lamboy. He likened Market Street to a pipeline, with the City Hall PATCO train stop at 5th Street at one end and the Waterfront at the other.

Lamboy said market projections indicate many new workers will be walking Market Street to the Waterfront, bringing foot traffic and shoppers to the corridor.

Optimistic about property in the area, he nevertheless cautions that sellers still outweigh buyers for most properties in the area. 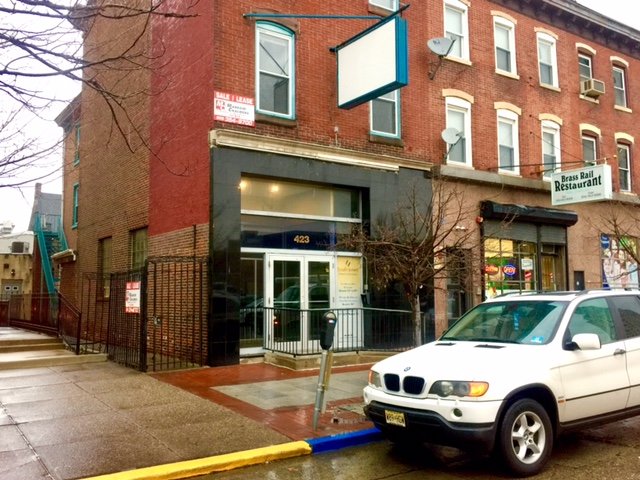 Raymond Lamboy, the leader of the Latin American Economic Development Association, sold this Downtown property on the 400 block Market Street in Camden earlier this week. He said coming Waterfront development will mean an influx of workers and “feeder businesses” on Market Street.

For instance, LAEDA sold a property just last week at 423 Market St., the former home of a credit union that moved a few blocks away on Market, to Damon Pennington, who owns a firm in Camden offering information technology and other services.

Pennington already owns several properties on Market Street and has even talked about creating a restaurant row in the city.

Lamboy said while there were “credible showings,” the level of interest in the former credit union site did not result in multiple offers for the property, which is narrow, older and in need of updating.

On the other hand, Lamboy said multiple potential buyers and a purchase without the aid of tax credits for the building on the 100 block of Market “is a little bit shocking.”

But he added it also shows “so much confidence” on the part of the buyer.

Meanwhile, Kris Kolluri, CEO of the Rutgers-Rowan Board of Governors, is moving ahead with plans to bring commercial real estate and retail nearby to the Broadway corridor near the medical school.

A “clean, safe and well-positioned” retail area is the goal, he added.

In April, construction will begin on the main building, with heavy work set for September.

Across the street, the board is buying several parcels from the city for development of a new neighborhood retail area. It is also using eminent domain and has filed suit to force the sale of eight storefronts on the 200 block of Broadway. Rutgers-Rowan has offered $1.9 million to the owners.

Kolluri said the board of governors’ plans have “changed the dynamic” in the downtown real estate market, ticking up the value of real estate for the first time in decades. “We’re the market makers,” he said.

The longer-term plan is to leverage the retail construction to attract demand for new housing investment in the area, said Kolluri.

Camden County Freeholder Director Louis Cappelli Jr., whose grandparents lived in the neighborhood, hopes to see the area again become "alive and booming and the heart of the city."

"With more than $120 million of new investment by the joint board on the adjoining blocks, for scientific innovation and research, the area will be redefined and transformed by the growing ed-and-meds corridor.

"In addition, the county is moving to demolish the former Lit Brothers store and create more public space to complement Roosevelt Park, the new Rutgers-Camden Nursing School and the future improvements to the Walter Rand Transportation Center," he said. "In a short period, this segment of the city will be unrecognizable and will provide amenities to residents, employees and students that don’t exist right now.”

But for now, though, Kolluri admits the ripple of interest has not hit Camden’s established residential neighborhoods, where home sales still languish and real estate values continue to stagnate or slide.

“Housing is a lagging indicator,” he said.