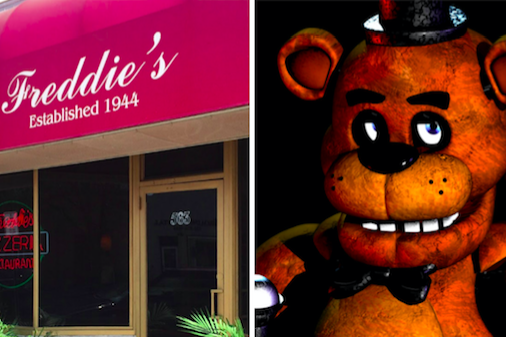 Usually, pizza places are thrilled when the phone won't stop ringing. It means business is brisk and booming in a notoriously competitive industry.

Not so at Freddie's Restaurant and Pizzeria in Long Branch, New Jersey, where nonstop calls have become the latest youth culture oddity to put a pie in the face of unwitting adults.

For much of the past year, Freddie's has been inundated with calls from kids who want to know whether the restaurant inspired the wildly popular indie game "Five Nights at Freddy's," which is now in its fourth iteration.

"We give cellphones to our kids, and we are not paying attention to what they are doing," said Oscar Hernandez, manager of Freddie's, in an interview with the Asbury Park Press. "One number, for example, he doesn't call 10, 15 times. No, over that. Imagine one number calling over 20, 30 times."

For those of you who have just been 'yes pumpkining' your kids, cousins and little siblings for the past two years — you know who you are — "Five Nights at Freddy's" is a cult phenomenon in the virtual gaming community. The point-and-click survival horror title centers on the fictional Freddy Fazbear Pizza, a bustling restaurant filled with animatronics who are compliant by day and lethally weird by night.

An overnight security guard, the game's protagonist, is left trapped to defend himself against Freddy Fazbear and his villainous cronies. Players monitor grainy security cameras from a single room, with a limited electrical supply, to control the restaurant's lights and doors, thus thwarting an attack. It is every bit as hair-raising as it sounds.

It's also destroying the peace at Freddie's Restaurant and Pizzeria, where thousands of after-school calls have been pouring in from area codes all over the United States. The family-owned restaurant, founded in 1944, has called in reinforcements and added phone lines to manage the bombardment. It's become difficult to pick up for callers who actually want to order a pizza.

Scott Cawthon, the 44-year-old creator of "Five Nights at Freddy's," provided an automated response to an Asbury Park Press request for comment.

This is hardly the last you'll hear of "Five Nights at Freddy's," by the way. A movie is reportedly in development, the game remains an e-Sports streaming goliath and kids are obsessed with a collection of action figures.

As for Oscar Hernandez and his staff, they might want to pray this is a fad, change their name or invest in animatronics. There's probably a huge business opportunity if they do.