Baby seals are washing up at Jersey Shore, prompting action from marine vets 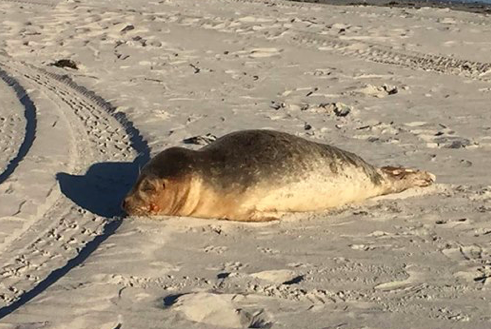 A seal pup washed ashore on a beach in New Jersey. The Marine Mammal Stranding Center in Brigantine works to rehabilitate stranded seals and release them back into the wild.

As temperatures start to climb and locals start to visit the beach, marine experts are seeking help to locate baby seals who have been washing up at the Jersey Shore lately.

The Marine Mammal Stranding Center in Brigantine has reported a number of seals winding up on the beach in recent weeks.

RELATED: Frozen sea turtles washing up on Jersey Shore may not be dead

Known for its rescue work, the center actively discourages disclosure of the locations where seals are found on the beach.

"If a sick seal is harrassed and returns to the water, his chances of surviving become slim," the center said in an Instagram post Friday.

Seven little harbor and grey seals were taken into the center's rehab this week for treatment and an eventual return to the wild.

Seven little harbor and grey seals in our rehab today. We know there are many more on beaches. We ask that you call us if you spot one at 609-266-0538. Please DO NOT SHARE THE LOCATION OF THE SEALS ON SOCIAL MEDIA. If a sick seal is harrassed and returns to the water, his chances of surviving become slim. LOVE THEM FROM A DISTANCE PLEASE!

Several seals have been rehabilitated and safely returned to the wild over the past month, according to the center's Facebook timeline.

The stranding center asks anyone who spots a seal on the beach to call them directly on their hotline at 609-266-0538.

"Many times a seal or other marine mammal of sea turtle ashore may have injuries or illness that need immediate attention in order to save its life," the center said. "A message via social media or internet may not reach us for several hours, which could result in the death of the animal."