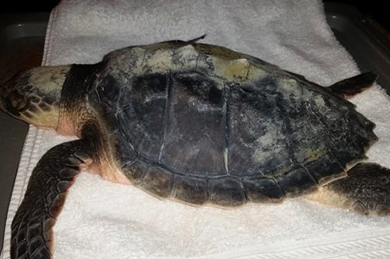 Sea turtle survives cold-stunning after a rehabilitation with warm towel.

Frigid temperatures around Thanksgiving may have been a death sentence for stray turtles lingering up north in November – or so it seems.

The Marine Mammal Stranding Center in Brigantine, Atlantic County, has warned winter beach walkers and clean-up crews not to assume beached sea turtles are dead, even if they appear frozen solid.

"They may look dead because they're not moving," said Bob Schoelkopf, the center's founding director. "But they might just be stunned from the cold."

Resurrecting frozen reptiles and other creatures may sound familiar. When temperatures get low in Florida, iguanas sometimes rain down from trees. They remain frozen stiff on the ground for a while and then spring back to life once they get their juices flowing again.

It’s so cold the iguanas are freezing and falling out of trees @CBS12 pic.twitter.com/9nCTfKPaGJ

Schoelkopf said the fate of sea turtles in this predicament isn't always as promising.

In the back bay of Cape Cod, Massachusetts, it's common for sea turtles to be impeded by geography in their annual journeys south to warmer waters. They don't know to swim back north and work around the cape, so they end up trapped in the cold and freeze.

More than 190 frozen sea turtles have washed up in Cape Cod since Thanksgiving. The vast majority of them did not survive, Schoelkopf said.

On Long Beach Island, New Jersey, the situation isn't quite as dire, but it has its own set of complications.

Effluent from the Exelon Oyster Creek Generating Station, which is in the process of closing down, sometimes warms the surrounding waters and lulls sea turtles into misguided comfort. They end up feeding for too long in a warmer location only to find themselves suddenly in much colder water than they expected. Ideally, sea turles live in areas between 75-85 degrees.

The Marine Mammal Stranding Center said one frozen turtle was found on Long Beach Island earlier this month and that generally several wash ashore each year. Their prospects for surviving aren't bad if they're spotted early and placed under expert care.

"Once they start to gradually warm up, you see movement again and they show interest in food," Schoelkopf said.

The center is encouraging residents all along the Jersey Shore to take walks along the wrack line of beaches to clear debris, seaweed, litter and locate possibly frozen turtles.

Schoelkopf said it's also about time to be on the lookout for seals who end up stranded on the beach. The center is raising money to build a safe location to house and rehabilitate vulnerable seals.

"If you see seals or turtles, give us a call," Schoelkopf said, cautioning residents not to touch them. "If the seal is alive, it will bite."