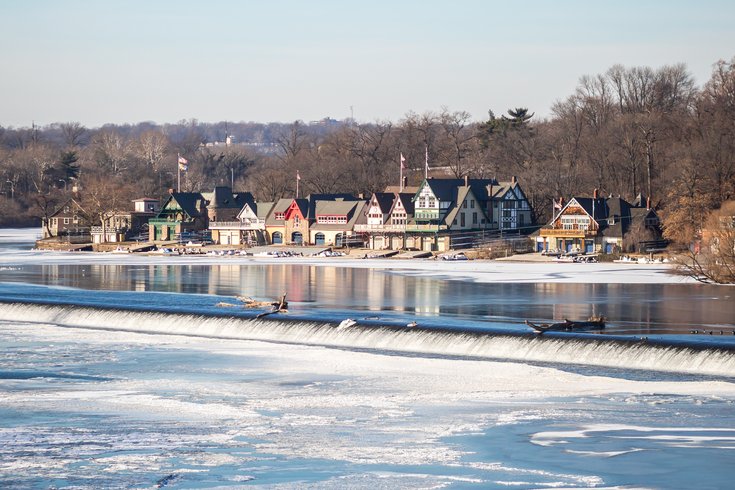 The Schuylkill River has frozen over at Boathouse Row on Tuesday, Jan. 2, 2018. A 12-day stretch of temperatures at freezing or below is to end Monday.

Forecasters on Wednesday afternoon hiked the amount of snow expected to fall Thursday in the immediate vicinity of Philadelphia.

The National Weather Service now says that the I-95 corridor – including the city and the eastern parts of Chester and Montgomery counties, and Lower Bucks County – can expect to see 5 to 7 inches of snow. Previous forecasts called for 2 to 4 inches of snow. Forecasters declared a winter storm warning from 9 p.m. Wednesday to 7 p.m. Thursday.

All Philadelphia public and archdiocesan schools will be closed Thursday.

The weather service also upgraded to a blizzard warning for the Jersey Shore and the eastern half of South Jersey for the same time period and pushed expected snow accumulations to 6 to 10 inches. Winds will gust at close to 50 mph, making travel dangerous to impossible, including during the morning commute on Thursday, due to heavy, blowing snow. Tree branches could fall as well.

All Spirit Airlines flights Thursday out of Atlantic City have been canceled.

Some Thursday flights at Philadelphia International Airport already have been canceled. The airport is advising travelers to check flight status with their carriers. Some airlines are waiving fees to change itineraries between certain cities, PHL tweeted.

We have seen all those elements so far this winter, but over the next several days they will combine and intensify to a degree that forecasters are warning that "societal impacts will probably be significant."

Here's a chronological look at what you need to know about the weather through Monday. (Read to the end for the good news.)

A powerful Nor-easter moving up the coast from Florida will rapidly intensify Wednesday and bring snow to the region Wednesday night.

The National Weather Service says with fairly high confidence that the storm's current track will mean slighter higher accumulations of 4 to 7 inches of snow from southern Delaware through eastern New Jersey. As a result, a winter storm watch has been upgraded to a winter storm warning for the eastern half of South Jersey.

A winter storm advisory has been posted for the western half of South Jersey as well as Philadelphia, the eastern parts of Chester and Montgomery counties, as well as Lower Bucks County.

The snow will develop south to north and into South Jersey on Wednesday night and then expand north overnight, forecasters say. The heaviest and steadiest snow will be east of the I-95 corridor and especially at the Jersey Shore.

Philadelphia is expected to see between 2 and 4 inches of snow, with locally higher amounts possible. There is low confidence in the snow totals along the I-95 corridor and northwest, as there is the potential for more – or less – if the storm veers from its current track. Either way, there is likely to be a sharp cut-off in snowfall totals somewhere across the region, forecasters say.

Snow-covered roads and decrease visibility will make driving hazardous in many locations. 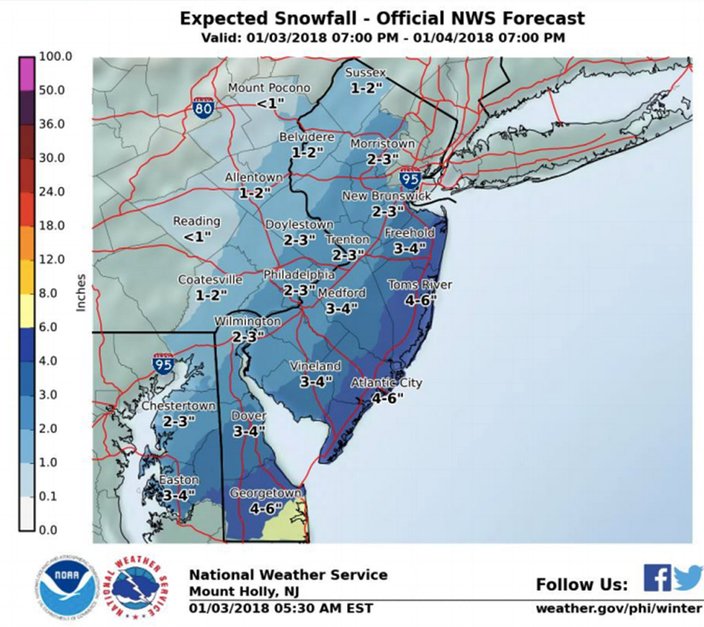 The snow continues Thursday and it remains cold.

As the storm moves northward, northerly winds continue to ramp up to about 20-30 mph, with gusts of 30-40 mph. Already bitter wind chills will get worse. Impact to infrastructure (frozen pipes, broken heating systems, expired car batteries) are foreseen. Homeowners are advised to check their heating fuel supplies.

SEPTA is already taking steps to deal with the effect of the snow and cold on service. The agency said Wednesday afternoon it will take measures to prevent equipment, inspect bridges and structures susceptible to cold-weather issues and implement speed restrictions on Regional Rail and its Route 101 and 102 trolleys. In addition, heaters will be used on track switches to keep them from freezing up. Additional staff will be on-hand to monitor potential problems and get them repaired quickly. For the latest updates, riders should use SEPTA's System Status.

The intense winds will likely trigger airline delays at Philadelphia International Airport from Thursday to Friday.

Small watercraft off the Jersey Coast will have to deal with gale conditions and seas building to dangerous levels.

As the forecasters put it in their Wednesday morning forecast discussion, the 48 hours beginning Thursday night will be "wicked cold." Many low temperature records across the area are in jeopardy.

In the forecast discussion Wednesday morning, the forecaster wrote: "I cannot stress enough how high-impact this stretch of cold might be ... Given the duration of the cold preceding this period, the added factor of windy conditions for a lengthy period during this period, and the anomalous nature of the cold that is forecast – societal impacts will probably be significant."

Indeed, potentially record-low temperatures in Philadelphia in the single digits and teens, combined with strong, gusty winds, mean wind chills will likely to fall below zero in the Philadelphia region at times Thursday night through Saturday.

In the Poconos, a wind chill watch will be in effect from Thursday night to Saturday afternoon. With temperatures expected to settle around zero – something that hasn't happened in 20 years at least, forecasters say. Wind chills could fall as low as 30 below zero, which will cause frostbite in as little as 30 minutes to exposed skin. Forecasters warned that any scattered power outages that develop could be dangerous if heat was not available.

Brutal cold, with a high near 15 and a low around 6. Strong gusty winds. Nasty wind chills. Blowing and drifting snow.

Weather models are a bit all over the place according to forecasters, but precipitation looks to arrive at some point Monday or Monday night. It could be primarily rain, or it could be a rain and snow with some freezing rain and sleet thrown in. (Another model sees snow and wintry mix.)

Temperatures will trend to above average through Tuesday, leading a forecaster to say, "...given how cold it has been, Monday and Tuesday will feel like shorts and tees weather."

Indeed, if the thermometer hits 33 degrees as expected, a 12-day streak of continuous freezing-or-below temperatures in Philadelphia would end. That stretch would be tied for the fourth-longest and coldest such period since February 1979. The mercury last pushed above freezing at 2:55 p.m. on Dec. 26.

The celebration will be short-lived: the cold looks to return midweek.

Wednesday: Mostly sunny, with a high near 28. Calm wind becoming south around 5 mph in the afternoon.

Thursday: Snow, mainly before 1 p.m. Areas of blowing snow. High near 26. Blustery, with a northwest wind 16 to 22 mph, with gusts as high as 39 mph. Chance of precipitation is 90 percent. New snow accumulation of 1 to 2 inches possible.

Thursday night: Mostly cloudy, then gradually becoming mostly clear, with a low around 8. Wind chill values as low as 5 below. Northwest wind around 17 mph, with gusts as high as 34 mph.

Friday night: Partly cloudy, with a low around 6.

Saturday: Mostly sunny, with a high near 12.

Saturday night: Mostly clear, with a low around 3.

Sunday: Mostly sunny, with a high near 23.

Sunday night: Mostly cloudy, with a low around 20.

Monday: A chance of rain, snow, and freezing rain. Mostly cloudy, with a high near 40. Chance of precipitation is 50 percent.

Monday night: Rain likely. Mostly cloudy, with a low around 33. Chance of precipitation is 60 percent.

Tuesday: A chance of rain. Partly sunny, with a high near 45. Chance of precipitation is 40 percent.