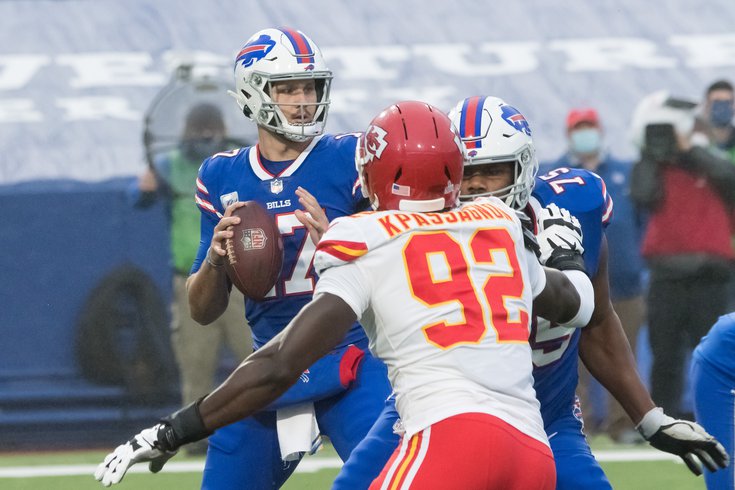 Josh Allen will look to join the NFL's elite on Sunday night against the Chiefs.

For the gambling enthusiasts, here are my NFC and AFC Conference Championship Round NFL playoff picks. To note, the team logos indicate who I think will win the game, not cover the spread. At the end of the picks, I'll note a few teams that I like based on the spread. All the below spreads are courtesy of the consensus odds at TheLines.com.

Buccaneers at Packers (-4): When the NFL puts out the schedule every April, they try to avoid making teams play road games on three consecutive weeks during the regular season because it is such a disadvantage. Because the Bucs did not win the NFC South and got into the playoffs as a wildcard, they had an uphill climb to get to the Super Bowl that was likely to include three straight road games.

And here we are. The Bucs will travel to Lambeau for their third straight road game in as many weeks, and their fifth road game in six weeks. Meanwhile, this will be the seventh week out of the last nine in which the Packers didn't have to travel. That is a pretty significant advantage.

And then there's the weather. It could be a slight advantage for the Packers, but that might be a little overblown as a storyline heading into this game. Obviously, the Packers are used to playing in cold weather games, and the Bucs are not, but the feeling here is that the quarterback is the player most affected by weather, and Tom Brady has won more than his share of games in the cold.

It's worth noting that the Bucs pounded the Packers way back in Week 6. Rodgers had his worst game of the season, completing 46 percent of his passes for 4.6 yards per attempt, 0 TDs, 4 sacks, and 2 INTs. The feeling here is that the Packers will have a better game plan this time around.

When you see Brady vs. Rodgers, many will think "shootout." I see this as a game with a moderate amount of scoring game between two evenly matched opponents, but give me the intangible factor of the Bucs being a little road weary against a relatively fresh Packers team. I'll take the Packers to win, but give me Tampa and the 4 points.

Bills at Chiefs (-3): Like the Bucs and Packers above, the Bills and Chiefs squared off in Week 6. The Chiefs won that game on the strength of a 161-yard rushing day from Clyde Edwards-Helaire.

The leadup to this matchup was really all about one thing. How healthy is Patrick Mahomes? If you saw the Chiefs' divisional round matchup against the Browns, you saw Mahomes stumble around as if concussed after this tackle by Mack Wilson.

During the week, Mahomes cleared the concussion protocol, and Dr. David Chao (not Mahomes' doctor, to be clear) believes that Mahomes was never concussed, and will have no lasting effects from that injury.

What is concerning, however, is Mahomes' turf toe.

#Chiefs QB Patrick Mahomes was diagnosed with turf toe, sources say, an injury that affected his preparation for the AFC Championship Game more than his time in the concussion protocol.

Turf toe is a tough injury to play through, and Mahomes' mobility could be affected by it. He is so good that he can be stationary from pocket and still play well, but if he's unable to also use his legs as a weapon in the way he normally can, he won't be quite as deadly. If you saw the Chiefs' run through the playoffs a year ago, you saw how many plays Mahomes made either running with the football, and buying time with his legs to make long throws down the field.

On top of worrying about whether or not Mahomes will be himself on Sunday, the Chiefs will also be facing one of the best secondaries in the NFL, which is capable of slowing down Kansas City's impressive set of playmakers, most notably Tyreek Hill. Tre'Davious White is a star player, and the Bills' safety tandem of Jordan Poyer and Micah Hyde is excellent.

Offensively, the Josh Allen-led Bills are mostly healthy. Their offense wasn't great last week against the Ravens, but they played a smart game, and did not turn the ball over in a matchup in which their defense was handling Baltimore's offense. Certainly though, the Bills are capable of putting points on the board, as they were second both in points and yards during the regular season.

It just feels like the Bills are having a special year, and I'm going to ride those positive vibes. Give me Buffalo, outright.